Difference between revisions of "KPz-70" 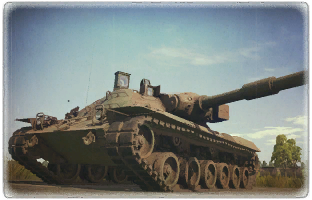 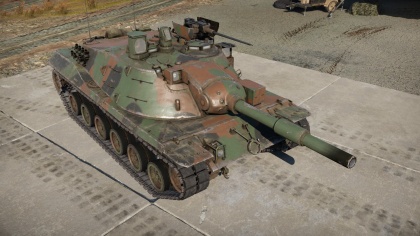 The KPz-70 displays impressive mobility, in terms of its ability to pickup and maintain speed over various terrains - albeit it is somewhat lackluster compared to some of the top rank vehicles such as the M1 Abrams and T-80B. This unfortunately negates many of the advantages the KPz-70 maintained during its reign as a top-rank vehicle. However, this doesn't change the need to utilize what mobility the vehicle has - it's the best weapon you have.

Unlike the Soviet T-64A (its main rival), the KPz-70 does not utilize composite armour, but an air gap that forces munitions penetrating the initial layers to lose their mass by fragmenting apart before moving to the next layer of armour. This general design concept has been in use as far back as WW2 and is even used to this day on modern fighting vehicles.

Spaced armour works wonderfully well against shaped charge munitions or any other munition with explosive filler provided it is of a stronger protection rating. Proceeding weapons and munitions development has seen this benefit decreased with either more powerful or tandem charge warheads and can be seen in-game against weapons that proceeded different designs of spaced armour. As such you will find weapons that were designed to defeat spaced armour such as the HOT-K3S ATGM and BAE Swingfire system that will penetrate it. However the spaced armour in the KPz-70 works exactly as it was designed to do against older anti-tank missiles, HEAT, HE, and HESH munitions.

The tank mounts no external spaced armour. The armour on the side and rear of the tank is not worth mentioning as it will only stop light machine gun fire and some cannon fire on the turret. Adversary SABOT rounds will penetrate clear through your engine and into the crew compartment most likely killing you if you are engaged from behind.

The most important feature that makes a tank is the cannon. In this department, the KPz-70 is no slouch. The 152 mm gun launcher system (the same one used on the M551 Sheridan), but with a longer barrel and is capable of firing a variety of munition types including an experimental APFSDS round, a traditional HEAT round (with high penetration), an experimental smoke round, and lastly the very capable and proven MGM-61C Shillelagh. This wide range of munition choices gives the operator a variety of options in pre-combat configuration which can greatly either hinder or enhance the tankers capability on the battlefield. The benefit of a longer barrel compared to its Sheridan counterpart ensures the KPz-70 is much more accurate at range and that the rounds leave the barrel at higher velocities thus increasing their overall damage dealing capabilities.

Additionally the 152mm gun launcher gets equipped with an auto loader, greatly reducing its time between followup shots on a target.

For targeting, the option to equip an incredibly accurate laser range finder is available. Additionally the 7.62 mm machine gun mounted in the turret can be used for range finding as well.

The Rheinmetall Rh 202 20 mm auto cannon is highly effective at dealing with light armoured battlefield threats and on some tanks exposed sides or rears. In some situations, it may be more beneficial to utilize the 20 mm as it will allow you to deal damage rapidly while conserving your main cannon ammunition. The cannon is also highly effective at shooting down low flying attackers. Note that if your commander is knocked out you will lose use of this weapon.

The KPz-70 is equipped with a diesel fueled 1,500 horsepower (1,100 kW) Daimler Benz V12 engine. This engine pack compared to its American counterpart produces more power, but only slightly so giving the KPz-70 an amazing 29.8 hp/t at 50 - 51.7 tons (depending on upgrade configuration).

A highly advantageous feature is the hydropneumatic suspension system which not only provides great cross country mobility, but allows the crew to position the vehicle in such a way to only expose the strongest armour at an enemy threat. The suspension can also be used to gain further gun depression by raising the rear of the tank and lowering the front thus allowing the gunner to engage from a position that he might not have been able to engage from previously.

The KPz-70 features the standard NATO track and block design that can be found on most NATO vehicles. The rubber track blocks provide great traction off road and on road compared to all metal tracks found on other fighting vehicles as sliding on a short halt or drifting is minimized.

Because of the elevated engine deck, gun depression is decreased significantly when firing or aiming the gun over the rear of the tank.

An unconventional feature at the time the KPz-70 was designed was the housing of all the crew members in the turret. Because of the autoloading system the need for a loader was eliminated and due to an attempt to further lower the tanks silhouette the driver was located to the turret with the gunner and commander. This can have potentially devastating consequences on the battlefield as the crew can easily be injured or killed by penetrating munitions entering the crew compartment.

For defensive countermeasures the tank is equipped with quad four barrel externally mounted smoke canister launchers which can provide either a defensive screen for yourself or friendly forces. These launchers can be fired in pairs of two. Keep in mind the smoke grenade launchers are operated by the gunner so should he become incapacitated in a fight you will not be able to launch them until he is either replaced by another crew member or you have the crew replenishment consumable unlocked.

Due to its low profile and effective array of camouflage options the KPz-70 scores high marks in the concealability category. It has a total of 4 camouflage options available to it. The standard (a 3 tone NATO CARC camouflage), winter camouflage (requires 700 battles against other players in the tank), a brown camouflage for desert environments, and lastly an olive drab option. The addition of various foliage can further increase the ability to conceal the tank.

The main weakness of the KPz-70 that you want to take advantage of as an opposing player is its weak armour when compared to other tanks of its rank. If you can get the tank to come to you it becomes much easier to fight it. Avoid springing his ambush if at all possible or try to sneak around him to flank and attack his weakest armour. A well placed shot through the side of the turret is generally a one shot kill as all of the crew is located in the turret along with an ammunition store with rounds being located under the turret basket.

If you have the proper position or speed try getting around the KPz-70 and engaging him from where he does not expect you. It's important to remember he has the ability to quickly snap the turret around and engage you so surprising him is of the up-most central importance if you are to come out on top of the fight.

Another weakness that can be exploited is its speed. Because of its speed unskilled players or players unfamiliar with its play style will often rush into situations they are not equipped to fight properly and find themselves overwhelmed allowing you to easily kill them.

One last weak spot worth mentioning is the turret breach. High penetrating munitions can completely pierce this section and travel into the crew compartment. SABOT rounds are especially effective at this.

Do not try to out-shoot the KPz-70 as it has a very rapid reload that in most cases will ensure that unless you've disabled the tanks ability to fire that he will be able to recover and kill you or disable you to such a point he may escape the engagement. 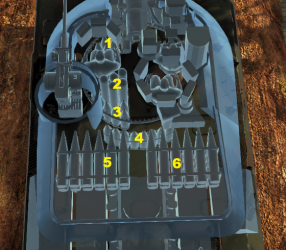 The tank plays very much like the Leopard 1A1A1. Players familiar with the Leopard play style will easily adapt to the KPz-70. It has reasonable mobility, especially with full upgrades and aced crew, allowing it to maneuver into spots not typically accessible by less mobile tanks. Utilize this to an advantage to set up ambushes as this is how you will get most of your kills. It's important to recognize when an engagement is not beneficial to you so that you may get a better position or escape from the threat.

Despite the initial appearance of strong frontal armour, it's important to remember when compared to its counterparts at its rank, it is not nearly enough to defeat threats head on such as the T-64A. Even ATGM from missile vehicles such as the Raketenjagdpanzer 2 HOT will penetrate the turret and upper glacis plate. Even other Rank V tanks can and will penetrate from the front. Because of the rather condensed placement of crew and ammunition you will most likely die. Because of this it is critical you get the first shot off in an engagement and ensure it is either a kill shot or one that cripples the threat to such a capacity they either cannot engage or will instinctively panic and try to run to repair or determine your engagement location.

The gun is especially versatile and powerful with a wide range of ammunition selection but you will generally find your cannon launched ATGM's and sabot rounds will get the job done in most situations. The 20 mm turret roof mounted cannon is great for taking out lightly armoured targets (to include some tanks, ATGM vehicles, etc), anti-air, and aircraft.

Essentially if you treat this tank like a Leopard, your survivability will increase dramatically. The hydro pneumatic allows you to position the tank in such ways that you can engage from non conventional spots while exposing only your strongest armour at the threat. The low silhouette makes the tank especially difficult to hit at longer ranges and this can be further enhanced (situation dependent) by your adjustable suspension. Because of the accurate cannon you will also find it to be easy to engage at longer ranges which will maximize your strengths while reducing your targets.

In summary the KPz-70 is a great addition to any end game lineup as it provides great flexibility in almost all engagements and is well worth the time and investment to acquire.

Ambushing is your strength. As covered previously utilize your speed to get into firing positions quickly and cause chaos and confusion among the enemy.

The KPz-70 can also quickly capture objective points and when used properly hold positions so long as it does not stay in any one place to long.

Scoot and shoot tactics will benefit you as well as terrain masking techniques.

Should you have to fight in closer engagement ranges or in close quarters it's critical to always remember your armour will not protect you however your speed, fast rotating turret, and maneuverability will. Provided you utilize these to your advantage you will be able to control the fight. Recognize when you are being baited into an ambush and avoid them as you don't stand a great chance of conducting a counter ambush due to your weak armour which will allow you to be killed easily at close range.

If you have found yourself to be the victim of an ambush from an opponent launch a smokescreen, escape, and reassess for a counter ambush.

The KPz-70 benefits greatly from squad play. A skilled lone KPz-70 is most certainly a threat on the battlefield but 2 or even 3 KPz-70's working in conjunction with each other in a squad is an extreme danger to the opposing team as the use of squad tactics in combination with the great strengths of the tank can almost completely control the momentum of the conflict.