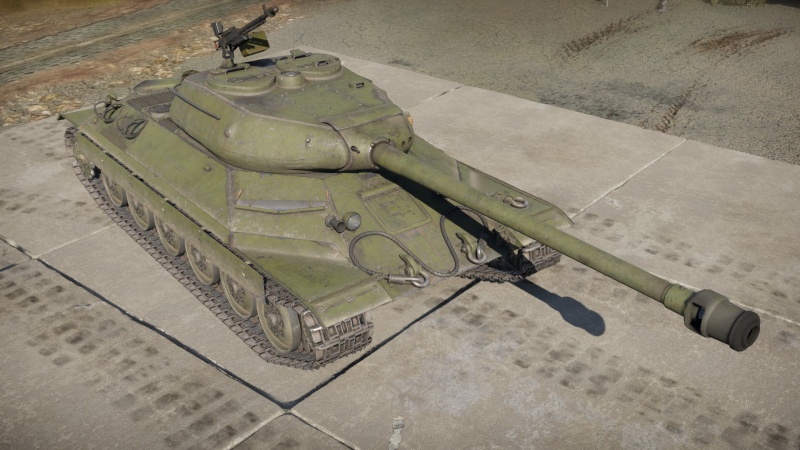 From the front, only high-end rounds (HEATFS, HESH, APFSDS) can penetrate the IS-6. Otherwise, flank it since its lower side armour is flat behind the tracks. In a close to medium range fight, if the IS-6 is static and facing you, try to shoot its right side turret cupola, a penetrating APHE shell may knock out the commander and gunner, disabling the tank (some large calibre rounds can even knock out the loader and/or driver, resulting in an instant elimination). This strategy is not applicable with rounds that don't have HE filler.

Facing enemies with HEATFS rounds is a dire situation for the IS-6 as the armour is not thick enough to withstand the round in any angle. Extreme caution should be taken when fighting those tanks. It would be more ideal to withdraw into a different firing position and either wait to ambush the enemy tank as it comes to pursue the IS-6 or provide teammates the opportunity to take out the enemy.

The IS-6 prototypes were tested alongside the Object 701 (the prototype of the IS-4).[5] The two IS-6 prototypes proved disappointing, with the Object 253's electric transmission being too complex, expensive, and unreliable.[2] The Object 252's mechanical transmission also suffered from reliability issues. Suspension problems also impacted the IS-6, with its speed dropping below the heavier Object 701. It was hoped that the electric transmission would help make the tank more manoeuvrable, but the heavy weight prohibited any vast improvements.[4] Overall, the IS-6 armour was deemed to not provide any improvements over existing designs, having only comparable armour, firepower, and mobility to the IS-2 and IS-3. In 1945, all work on the IS-6 ceased as work continued on the Object 701.[5]