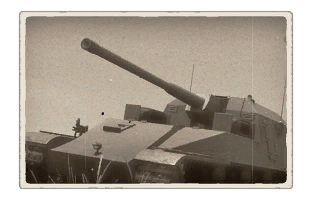 The Type 5 Ho-Ri Production is a rank IV Japanese tank destroyer with a battle rating of 7.0 (AB/RB/SB). It was introduced in Update 1.73 "Vive la France".

The Ho-Ri has a distinctive sloped UFP, small gun mantlet, and long casemate hull. Note the large lower plate - it is quite vulnerable and shots there can get its transmission destroyed. 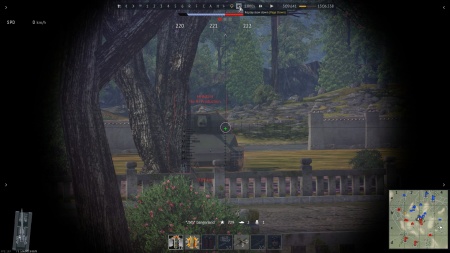 Destroying Ho-Ri with APHE in direct battle isn't really all that hard - simply aim for these square sheets protecting its radiators and fire. As long as your shell can penetrate 200 mm of armour it will instantly explode the tank, or at least take out the entirety of the crew in that part of the tank. If you are very good at aiming, you can aim a bit higher to hit the window which has only 175 mm of armour with potential of hitting an outer ammo rack directly, but reduced likelyhood of APHE hitting the ammo on the bottom of the tank.

If you spot a Ho-Ri, never shoot it in the sloped UFP. It can bounce shells from even an Object 120 and the only good thing that can come from it is if you get lucky and it bounces into the barrel. Instead, aim for the 120mm lower plate to destroy its mobility, or the right side of the mantlet to knock out the gunner. Note that the outer edges of the mantlet are slightly weaker, so if using APHE aim for that if possible.

While transmission is very sturdy and LFP is rather thick for lighter tanks and APHE, some heavy pure AP tanks like Lorraine 40t can shoot through it and ammo rack Ho-Ri in one shot.

There is also a minor, but important detail - whenever your gun is pointing down, it opens the hatch on top of your vehicle, so if the enemy attacker is trying to top-down your SPG, pull your gun up to make sure it won't destroy the vehicle. It is also possible to push HE inside of compartment when the hatch is opened, but for anything, with exception of rank I tanks, it would be easier to just shoot your tank directly.

Overall, the Ho-Ri is highly resistant to light tanks and many relatively low-velocity shells when angled (such as even it's own APHE), however at flat angle front can be easily penetrated (especially when fired at point blank), flat sides can be easily penetrated by anything at the BR, and even the rear can be penetrated by SPAA. As such, in urban enviroment, it's best to cut corners and drive out onto enemy while already being angled.

Worst case scenario, Ho-Ri has 6 crew members, which are located in a very practical way (not just standing straight in the middle of the tank, but rather stand closer to the hull), so taking all of them out is a challenge in itself, and if player took less than maximal amount of ammo into fight, only the best-aimed shots can indefinitely one-shot the tank.

When spaded, the Ho-Ri Production moves at the pace of a medium tank - about 40/30 km/h (AB/RB) forward and -10/-8 km/h (AB/RB) backwards when offroad. It climb hills easily, sometimes even getting up the mountains.

The biggest problem of this SPG is that its turn rate is quite low, and it lacks neutral steering. One must maximize "driving" skill of the crew to be able to indefinitely turn around, otherwise tank throttles and fails to turn around at gear 1-2, which can be easily exploited by enemy light tanks.

In Arcade mode Ho-Ri Production's engine is powerful enough to move hostile heavy tanks and push them around, denying repairs. Due to its hull shape, hostile tanks often get pulled on it and become completely helpless, especially when pushed against the wall, making tanks like T29, IS-6 and T-54 vulnerable to point blank finishers. Wide and agile medium tanks like T-44-100 or Warrior often resist ramming attempts if away from walls and can eventually sidestep Ho-Ri Production, but there is no practical need to ram them anyway. If you absolutely have to do it, do not leave them enough space to squeeze between Ho-Ri Production and the wall, or they will escape.

The weapon used by Ho-Ri is mostly suited to attack medium and heavy tanks, while heavy SPG and hull-down tanks at it's BR can mostly deflect its shots unless a weak spot is hit. As such, engaging other SPG is always a great risk.

While APHE used by it sometimes struggles at penetrating enemy and hasty shot might result in ricochet, if it penetrates the enemy tank is probably going to blow up, making destroying anything like Tiger II (10.5 cm Kw.K) and Centurion (Family) relatively easy, which is also supported by SPG armour being able to bounce most, if not all, of their reply shots. Gun is also relatively easy to handle on move if self-discipline is maintained.

In close quarters, if gunner got taken out and situation looks grim, Ho-Ri can ram the opponent and pull them onto a rock, wall, hill, or even itself, then push APHE into their now un-angled hull as soon as someone replaces the gunner. Usually APHE is potent enough to reach the ammo rack or the crew and one-shot the tank, but if ammo rack is destroyed, the chain reaction also often destroys or completely immobilizes Ho-Ri as well.

Apart from APHE, the gun can be armed with "Experimental HE", which is mostly used to simply destroy light tanks without having to aim for too long. 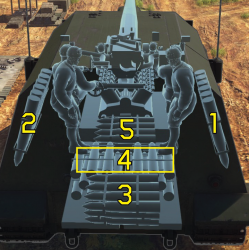 Ammo racks of the Ho-Ri Prototype (identical to Production type).

The Ho-Ri can be used in multiple roles. Its most effective at medium range, where it's harder for the enemy to aim for the lower plate and shells have a harder time penetrating the mantlet, making it easy for you to destroy them. The Ho-Ri is also quite potent at long range, particularly in down-tiers, where your gun remains effective (though less so) and your armour becomes even better. Be careful using it as a brawler, however. Your transmission is easier to hit, the mantlet is easier to penetrate, and faster foes can surround you easier and get a shot at your weak side armour.

The Ho-Ri should be primarily played as a medium to long range sniper. Your potent cannon can dispatch most enemies and the thick frontal armour will stop most shots, especially the UFP which is basically an auto-bounce zone. Be careful in close quarters - the Ho-Ri turns quite slowly when not up to speed and an easy shot to the LFP will instantly eliminate your mobility allowing for an easy flank. Your surprisingly fast acceleration will also assist when getting to nice sniping spots, and the speedy reverse allows you to retreat when getting overrun.

Due to Ho-Ri having more effective armour than most tanks at BR, and weapon capable of one-shots, it can be used as a flank attacker or even brawler in close range. The idea is to flank enemy, destroy as many tanks as possible before they realized what's going on, and then try to destroy them 1 by 1. While this strategy is most useful in AB (due to increased mobility of the vehicle and sometimes limited map space) and requires high "driving" crew skill, Ho-Ri is undeniably scary in close quarters, due to it being able to survive dozens of direct shots (as example, 3 poorly placed direct shots of Centurion Mk.5 AVRE and about 10 shots from Tiger II (P)) and even somehow come out on top in 1v3 fights. Try to keep your head cool though, as while going completely berserk and sweeping streets of enemy tanks, one might forget about lighter enemy tanks like Vickers MBT and Panther II, users of which will never miss their opportunity to snipe ammo rack of an unsuspecting opponent from 50 to 2000 m alike.

Some concerning enemies are:

Skin and Camouflages for the Ho-Ri Production in Warthunder Live.