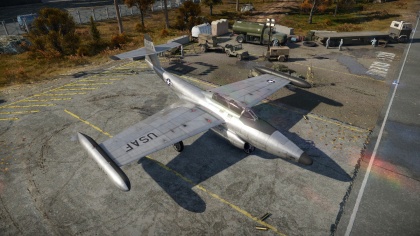 The F-89B has two 12.7mm steel armor plates in the nose and a 60mm bulletproof windshield. The wing tips will break past the aileron at 920+ kph (depending on altitude) and will count as a death. HOWEVER, you can limp back to base if you: maintain speed/don't turn sharp to avoid a spin, approach the airfield low and straight on, open the air brake to help balance the broken wing, roll the intact wing down, lower the gear at < 300 kph then roll back level onto the runway.

Repair and get back in the fight!