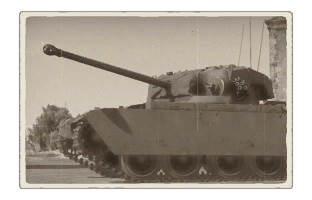 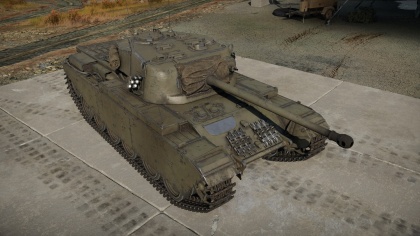 The Centurion Mk 1 is a rank IV British medium tank with a battle rating of 5.7 (AB/RB/SB). It was introduced in Update 1.67 "Assault". It is equipped with the well-known British QF 17-pounder mounted on a new hull that definitively makes the Cromwell chassis outdated.

The Centurion Mk.1 moves away from the familiar Cromwell chassis. While not being as fast or manoeuvrable, It does have sloped frontal armour, a strongly armoured turret, and a good QF 17-pounder gun with access to APDS.

Mobility
The Centurion easily reaches its top speed of 39 km/h on almost any ground, due to its wide tracks and a good engine, even at stock performances. It also has a refreshingly good reverse speed (~13 km/h) (compared to the dreadful reverse speed of tanks on the Cromwell chassis) and can turn on the spot quite fast.

Armour
The main improvement from previous British mediums is its thick and sloped armour. Reaching 152 mm on the turret and a good 76 mm angled at 58° on the front hull, this tanks can actually block point-blank shots from most cannons it will face like the Russian D-5T, the Japanese Type II 75 mm and even some German guns at 500 m. This tank can actually expose its upper glacis since it will bounce most shots. This tank still has weak spots though: gun and MG mantlet are "only" 127 mm thick, barely angled and lower glacis are 76 mm at 44°, meaning close-range shots will eventually penetrate. It also has thin side armour, meaning that the tank is vulnerable to flank attacks and compound angling cannot be done effectively without exposing the sides. These traits mean that the Centurion Mk.1 can happily stand up most frontal shots at this rank.

The Centurion Mk 1 is the first tank players will encounter in the British tech tree that sports a sloped hull front similar to the Panther, which with a thickness of 76.2 mm provides great protection for its battle rating, especially when the hull is angled slightly. Turret armour features 127 mm thickness throughout the front but features many flat areas that cannons of sufficient power will exploit to destroy the tank, especially since 3 out of the 4 crew members are located in the turret. Side armour can withstand auto-cannon fire with exceptions for HVAP rounds, so don't rely on it outside of that. If the situation becomes sticky and a tactical retreat is required, a single wide volley of smoke grenades launched from the turret can cover you from the line-of-sight.

Compared to the many Cromwell based tanks before the Centurion, it does lose out on a great forward speed, only being able to reach 41 km/h (AB) / 37 km/h (RB) maximum, but in return it does receive great reverse speed of 13.4 km/h (AB)/12.1 km/h (RB), allowing for tactics that would not be recommended with the Cromwell like "Peek-a-boos". It also retains good maneuverability, effective neutral steering, and a very acceptable acceleration due to good power-to-weight ratio. 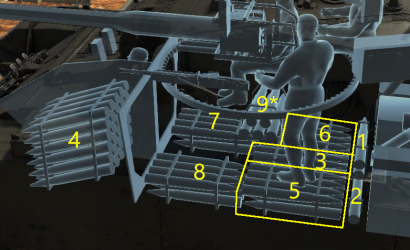 This tank is a good Jack-of-all-trades, meaning it can effectively deal with any situation with good effectiveness, so one can play it as you like, as long as you follow a few specific guidelines and patterns, in order not to get shot down too easily.

Hide LFP: In any engagement, this is the weakest part of your frontal armour, behind it there is your main ammo rack and driver, avoid showing this part of the tank to the enemy.

Stay on the move: This tank has good mobility, use it to make it harder to target your weak spots at close ranges and avoid shots at long ranges.

No hull angling: Since your sides are weak, do not try angling since it will only allow the enemy to get an easy kill. Use your good hull traverse (turning on the spot) to always face directly your foe. When turning corners, take a large turn in order to show only your frontal armour to anything that can be waiting around the corner.

Angle turret between shots: While your hull sides are not that thick, your turret's side armour is much more forgiving at 89 mm, nod your turret ~ 10° to the right in order to maximise frontal LOS thickness.

Compensate parallax: Your gun and optics are very far apart from each order meaning that your shells will always fall 1 meter left of your crosshair at any range (no convergence). This is particularly important in RB/SB battle since there is no aiming assistance to help you.