The 7.62 mm Browning MG4 is a South African production designation of the Browning M1919 machine gun. 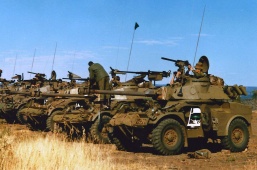 The Browning MG4 was a production of the Browning M1919 machine gun in South Africa, by Lyttleton Engineering Works.[1] This production was owned by Denel SOC Ltd. as Lyttleton was merged into a division under Denel Land Systems.[2]