The M134 Minigun (7.62 mm) is a six-barrel rotary machine gun which is powered by an external source to rotate the barrel allowing for a high rate of speed when it comes to firing the weapon. This gun can be plugged into an electric motor or a vehicle such as a UH-1 helicopter to receive power. The term minigun is in reference being smaller compared to the original and larger 20 mm M61 Vulcan cannon of which the M134 is based on. The M134 utilises rifle calibre 7.62 x 51 mm NATO rounds instead of the 20 mm autocannon shells the M61 uses.

The M134 can either be mounted to a hard point on a vehicle for remote firing or can be put on a pedestal which allows a human to directly aim and fire the machine gun at will. The Minigun was designed and developed in the early '60s and was first used in the Vietnam War where it was primarily outfitted on helicopters which had issues with overheating barrels on their machine guns. The Minigun alleviated this problem with the air-cooled rotating barrels and could sustain fire longer when necessary, especially in hotter environments.

So reliable was the M134 Minigun, it found many applications, but not just on helicopters inside mounted pods such as the OH-6 Cayuse, AH-1 Cobra and UH-1 "Huey". Fixed wing aircraft also found a place for the M134 such as the A-37 Dragonfly, A-1 Skyraider, Douglas AC-47, Fairchild AC-119 and the Lockheed AC-130 where the ability to mount multiple Miniguns turned these aircraft into potent aerial firing platforms which could spray an area of the ground below with a hail of bullets.

Due to the versatility of this weapon also found its way to being mounted on tanks and ships as a force multiplier. 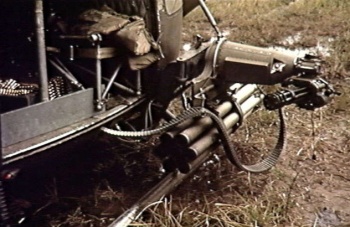 A view of an M134 Minigun mounted on an external hardpoint of a RAAF UH-1B Huey.

The M134 Minigun is a rotary six-barreled machine gun which is driven by an electric motor. A speed regulator prevents run-away operation and conforms firing output between 2,000 and 6,000 rounds per minute. The ammunition is belt fed and the gun will continue to fire as long as the firing trigger is depressed or the gun runs out of ammunition. Overheating is almost non-existent as with the rotating barrels are air-cooled.

The main purpose of the M134 Minigun is to lay down a lot of bullets in a short period of time in a relatively small area. While not very effective against armoured vehicles it can be used effectively against lighter armoured vehicles or other aircraft.

There are few weapons systems which stand the test of time and which are still in continual military use with only minor upgrades as time goes on, to name are few are the B-52 Stratofortress, C-130 Hercules and the M134 Minigun.

Throughout time, man has always looked at improving weapons to be either bigger, better or faster than the enemies weapons, ensuring an advantage. Ball and powder guns gave way to guns utilising bullets. Revolvers allowed continuous firing until all of the loaded rounds were fired and then reloading took place. Magazines allowed for more bullets to be loaded than revolver capacity, but true power came with belt loaded guns which had a hand-crank in the 1860s developed by Richard Gatling, allowing continuous firing until the cranking was stopped or bullets ran out. The gun would fire as fast as the person could crank the handle. While a fantastic weapon at this point, Gatling sought to improve the gun by connecting it to a revolutionary new invention, the electric motor. To optimize the firing rate, Gatling actually had to slow down the mechanism, however, at this rate could potentially still fire at 3,000 rounds per minute. Unfortunately newer, cheaper and lighter machine guns were developed a the same time and became the favoured guns and the Gatling gun as a whole was shelved. During World War I and later on, both the Germans and the British attempted to build upon Gatling's idea, however, none were successful enough to be deployed into combat.

As the United States became involved in the Vietnam Conflict, it was determined there was a need for an electric powered, rotating barrel Gatling-style gun. The gun needed to have a high rate of fire, but have a durable gun barrel which would not fail due to overheating from the high rate of fire. Taking note from the M61 Vulcan cannon which fired 20 mm autocannon rounds, General Electric developed a scaled down version which utilised the 7.62 x 51 mm NATO rounds and could fire up to 6,000 rounds per minute and with the electric rotating barrels, prevented overheating of the weapon. This weapon fit the bill which the military was looking for and was installed on a variety of helicopters, aircraft and vehicles.

By the 1990s, many of the guns still available were failing to operate properly. The company Dillon Aero acquired a large number of these weapons and determined that the Miniguns were worn-out from all of the use they went through. In an attempt to fix the problems with the worn out parts, Dillon actually improved upon the original design. The United States Army once again became interested in acquiring these upgraded M134s which then prompted Dillon to reevaluate other components of the gun such as the barrel, gun housing and the bolt. The emphasis was to work with lighter weight metals with equal or greater strength of steel to reduce the total weight of the unit. The new version procured by the US Army was designated the M134D or the GAU-17 for the United States Marines. Further modifications resulting in using titanium for some of the parts resulted in the M134D-T and M134D-H, allowing for continuous service of the weapon for upwards of 1.5 million rounds before parts replacement was needed. The M134 Minigun has been exported and used by almost 40 countries and is still in use today.