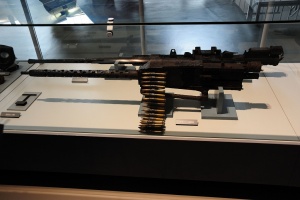 In War Thunder, this HMG excels at downing air targets from a distance, lighting fires and ripping off crucial components, something that other Japanese machine guns lack. This machine gun has a lot of incendiary potential, great ballistics, and good armour penetration. One small downside of this weapon is that it jams more quickly than other Browning variants, because the projectiles are filled with lots of incendiary material. 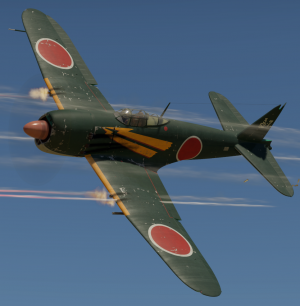 The A7M2 firing the Type 3 machine guns in the wings.

The Type 3 is a heavy machine gun similar in performance to the M2 Browning and Swedish 13.2 mm Akan m/39. It has really high incendiary potential, great accuracy, and high damage output. It has a fairly good fire rate, and does more damage than the German and Russian HMGs. Unfortunately, its jam rate is higher, due to the weight of the bullets, but this shouldn't be a problem because these machine guns generally should not be used to "spray and pray".

The Type 3 machine gun will be a lifesaver when it comes to dogfights. Many Japanese pilots know that the Type 97 or Ho-103 simply don't do enough damage to their opponents. Fortunately, the Type 3 is the perfect gun to replace the smaller calibre MGs. The AP-I in this belt is really reliable when downing the B-17, as it can light fires in the engines. Use this gun to light fires, strafe ground targets, and as long range guns.