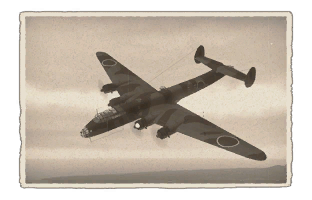 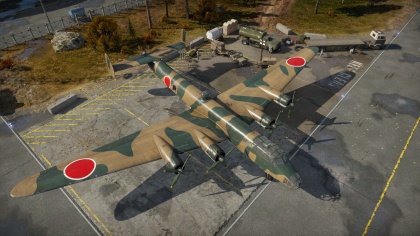 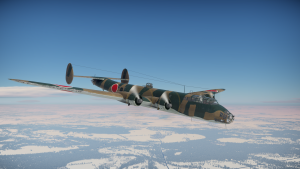 The G5N1 serves as one of Japan's true heavy bombers. Featuring a massive airframe and four Mitsubishi MK4B Kasei-12 fourteen-cylinder air-cooled engines, the G5N1 is easily one of the hardest planes to manoeuvre in War Thunder. It makes up for this with its massive 3,200 kg payload. Since this aircraft is so large and cumbersome, its only true purpose is destroying heavy targets. In Realistic battles, the tactics depend entirely on the map. Maps like Midway and New Guinea feature enemy airfields, which should be the main target. Other maps like Saipan have no airfields or mini base targets, so you will be forced to improvise. Since the G5N1 can carry a payload of 3,200 kg, it is possible to destroy multiple aircraft carriers. Target these instead of attempting to destroy smaller targets like tanks or pillboxes. Attacking the carriers can be a futile effort because to successfully bomb multiple carriers one needs to fly very low, thus exposing the bomber to enemy anti-aircraft fire. Try to come in on an attack run fast, because the enemy fleet will easily pick you off if traveling slowly.

The plane is quite slow and sluggish, even for a heavy bomber.  However, the plane as a very low stall speed of just 160kph (90 mph) and won’t be too hard to land when your flaps are out. Carrier landing is achievable if the carrier is moving at a fast enough speed. One issue is the low rip speed of this plane, at just 500kph/300mph, you won’t be outrunning anything. 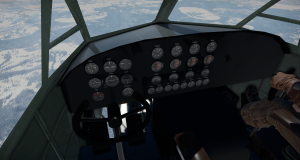 The G5N1 can be outfitted with the following ordnance: 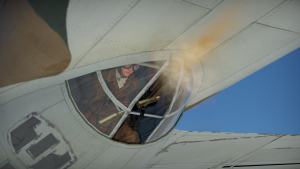 The G5N1 is defended by: 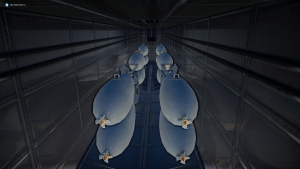 If the "14 in mod 35" module isn't researched, the other two bomb options can still be viable. The 24 x 60 kg bomb option can be useful on the map New Guinea because the enemy team has several cargo ships and light cruisers. Both are soft targets, and with 24 bombs it is straightforward to destroy all of them. The map Zhengzhou features dozens of light and heavy pillboxes which are also easy targets for the G5N1. The 12 x 250 kg bomb option works the best here. It is also possible to use the 60 kg bombs but requires a direct hit to destroy a light pillbox. The benefit of the 250 kg bombs is the bomber can destroy pillboxes without direct hits and may occasionally destroy a nearby AAA or artillery piece. In arcade battles, the 4 x 800 kg bomb option is the best for destroying mini bases and the enemy airfield. Utilise the different bomb options depending on what your target is. For light targets like pillboxes and tanks use either the 60 kg or 250 kg bombs, and for heavy targets like bases and airfields use 800 kg bombs.

The G5N's downfalls are what makes this aircraft very hard to use. It is incredibly difficult to turn within both Arcade and Realistic battles. The poor turn rate hinders the ability to drop your payload, thus making the G5N1 more efficient bombing from high altitudes. However, you will never be the only one high in the sky. This aircraft is incredibly vulnerable to all types of enemy fire both because of its sheer size and its standard defensive armament consisting of 20 mm cannons and 7.7 mm machine guns. The 20 mm cannon on the tail of this aircraft is virtually useless as it is unable to rotate left or right. If there is an enemy directly behind your plane it is possible to hit him with it but very difficult. Thus, the G5N1 must rely on a second 20 mm cannon in the dorsal position along with a host of 7.7 mm machine guns. Try to drop altitude to position the enemy in your dorsal gunner's range. Your best option to shake an enemy off of your tail is a teammate coming to help.

As with any bomber, if you're caught alone or off guard, you're as good as dead. Also, having a fighter escort will boost RP gains drastically. Fighter escorts enable this for all game modes. Generally, try to destroy as many targets as possible without wasting bombs. Use the G5N's strengths and attack the most significant target possible, whether that be a mini base, carrier, or air base. Team up with other players and fly in a formation. Flying with others will help defensively as well as offensively since you'll be able to obliterate your target. 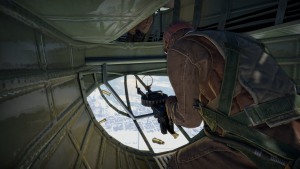 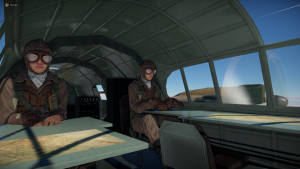 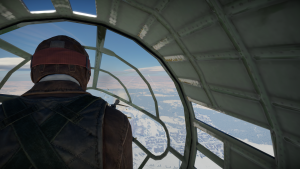 This aircraft was designed off of the Douglas DC-4E. It was Japan's first take on a four-engine heavy bomber design, and the DC-4E was first shipped to Japan's Nippon Koku K.K. aircraft corporation. After that, it was sent in secret to the Nakajima Aircraft Company for inspection. Having only six prototypes built, the G5N Shinzan saw no combat. The Assuming this aircraft to be a bomber, the Allies utilised the name "Liz".

It was designed in 1939-41 in the design bureau of Nakajima Aircraft Company, following the Imperial Japanese Navy's 13-Shi specification. The specification called for a long-range bomber with a flight range of about 3,000-3,500 nautical miles.

Since the Japanese aircraft designers at that point lacked experience creating a heavy four-engine aircraft, like the new bomber would be, it was decided to take a foreign design as the basis of the plane, to achieve the required characteristics. For this purpose, the Nippon Koku K.K. airline purchased the sole model of the American Douglas DC-4E airliner that was given in 1939 to the Nakajima Company after arriving in Japan, without making this knowledge public, to create the long-range bomber on its basis.

A G5N1 prototype, which became the first four-engine aircraft in the Japanese Navy, got off the ground in April 1941. The plane created by the Japanese designers retained the wing, the powerplant, and the landing gear of its American prototype, but it had a new fuselage with a glazed nose and a bomb bay, as well as a new twin-fin tail. The G5N1 was the first aircraft created in Japan to have a nosewheel.

The G5N1 bomber's combat load was only carried internally. Bombs ranging from 60 kg to 1,500 kg, in various combinations, could be suspended in the bomb bay positioned along the whole length of the centre wing section. The maximum bomb capacity was 4,000 kg.

A total of 4 G5N1 prototypes were built.