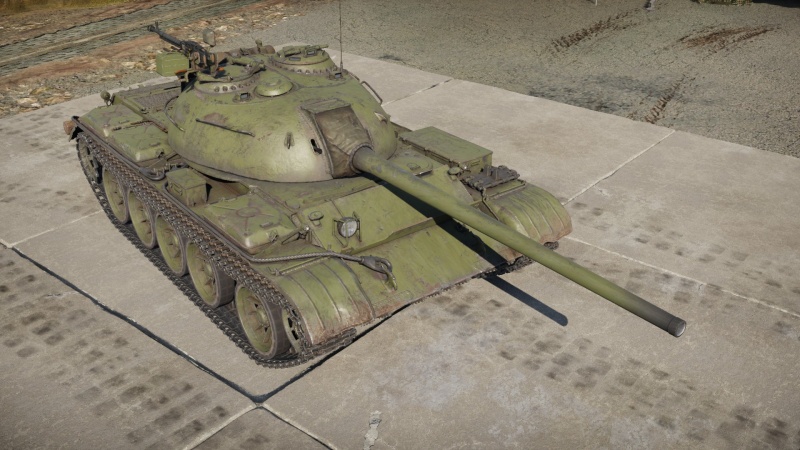 In-game, the 1951 model plays similarly to the 1949 model. It has the same reduced hull armour compared to the 1947 model but makes up for this with its better mobility and turret, which is not vulnerable to shot-traps like the 1947 and 1949 models are. The 1951 model also has access to a powerful HEATFS round.

The armour of the T-54 leaves nothing to be desired. While it does not get the 120 mm frontal plate of the T-54 (1947), it is one of the strongest frontal plates seen in an early MBT and is able to withstand full calibre solid shots from all nations (Obus de rupture for example, the French solid shot seen in most post war designs such as the Lorraine 40t, AMX-50, etc). However, the armour is nonexistent for HEAT and ATGM which are the main ammunition used in 7.7 to 8.7. The tank is practically immune to low calibre autocannon fire with exception of APDS rounds to the sides (seen in Warrior and AMX-30 DCA).

As a relatively heavily armoured tank and part of the Soviet doctrine, the mobility of the T-54 leaves much to be desired. Not only is top speed the lacklustre, but turn rate is not great and reverse speed is mediocre. Overall, the mobility is not the best and should not be relied on to be used to play as a fast paced vehicle. However, the power-to-weight ratio on the T-54 is impressive and is able to climb and move through rough territory with ease as well as push and pull tanks.

It's a priority to research Parts and FPE. After that, the player should focus on mobility upgrades or the Horizontal Drive modification, since both mobility and turret rotation are limited when the tank is stock. Also, the 3BK-5 HEATFS shell greatly increases the tank's damage output, and should be considered quite important as well. When grinding the first modifications, Arcade Battles might be more fun, because of faster-paced gameplay and the ability to see all threats. It may also be a good idea to activate 3-5 universal vehicle back-ups to be able to respawn twice in one match. General tips for the stock grind are the same as those for the T-54 (1947), read that article. 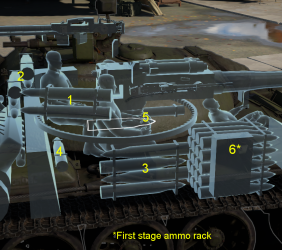 The T-54 (1951) is practically the same tank as the T-54 (1949), it has the same armour as the T-54 (1949) and the only difference is the addition of the new HEATFS round capable of going through 380 mm of armour (the War Thunder community generally accepts the T-54 (1951) as having the best ammunition overall). Again, the new round should be taken as a back-up option for the most armoured enemies, while the BR-412D should remain the main round.

The T-54 mod. 1951 was the final product of the T-54 family and the transition to early T-55 models. It featured the exact same hull, gun, NBC systems and fire control systems of the previous T-54 but with the TSh-2-22 telescopic gunner's sight. The mod. 1951 featured a turret redesign which removed the turret side undercuts, replaced radio with a new R-113 radio, reduced weight as the extra 20 mm has been removed, additional fuel tanks, fume extractor and addition of the TDA smoke generating system.