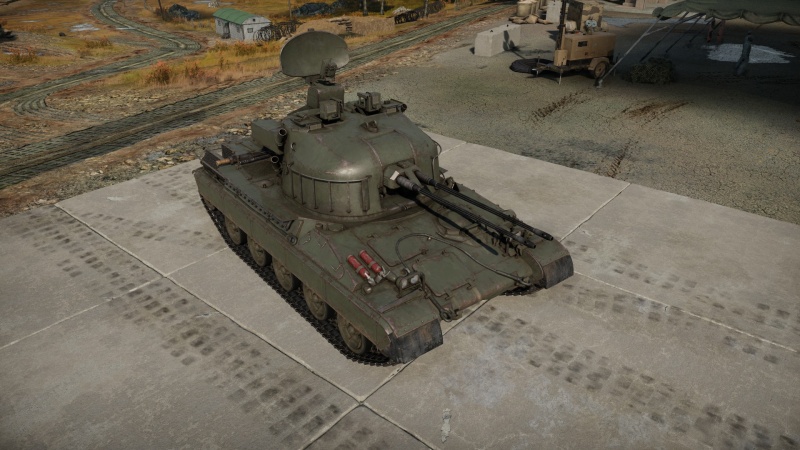 The AMX-30 DCA is a rank VI French self-propelled anti-aircraft vehicle with a battle rating of 8.3 (AB/RB/SB). It was introduced in Update 1.75 "La Résistance".

The AMX-30 DCA is based off the hull of the AMX-30 main battle tank, resulting in a decently armoured hull. The front glacis is heavily sloped and capable of bouncing most APHE shells and, with luck, some HEAT shells. However, the hull sides and rear are fairly weak, coming in at only 25-30 mm thick.

The turret is more modestly armoured, with 20 to 30 mm of armour. This is sufficiently strong enough to withstand 20 mm or 23 mm cannon fired from an angle, allowing you to shoot down enemy aircraft trying to strafe you.

Crew placement is fairly average, as the driver is in the center of the hull while the gunner and commander sit on the opposite side of the guns. However, the placement of the ammunition feed at the front of the turret means any penetrating shot has a significant chance of causing an ammunition detonation.It is not advised to take less ammunition, as the 30 mm cannons have a high fire rate.

As with the AMX-30, the AMX-30 DCA has a decent top and reverse speed of 65 km/h. This allows the DCA to keep up with its team, in addition to the ability to quickly escape danger.

However, note that the DCA lacks neutral steering and is somewhat slow to accelerate stock, meaning that it is possible to get caught off-guard and react too slowly.

The armament consists of 2 x 30 mm HSS 831A cannons with 300 RPG with a quick, fixed fire rate and can make use of 3 types of munitions: 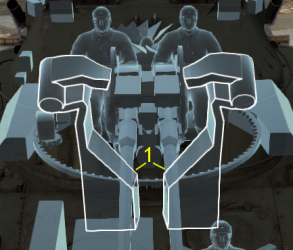 Ammo racks of the AMX-30 DCA

The AMX-30 DCA is equipped with a DR-VC-1A combined search and tracking radar. The radar is located at the rear of the turret and can be folded. The radar system but can only track targets within a 200° arc from the front of the turret.

Ideally, you should be in a place with horizontal cover against tanks and a wide field of view. Use the radar to spot incoming enemy aircraft. Lock onto the target within 4-5 kilometers in order to keep track of it, making sure to not fire.

For larger 2-4 engined aircraft, firing at 3 km may be effective. However, more agile single-engined fighters and most jet aircraft will be easily able to dodge incoming fire, meaning that you should wait until they close to 2 km before firing.

Fire in short bursts of 10-50 rounds each to avoid overheating and ammunition shortage. Moving the aim point around during the burst may help to disperse shots and increase hit probability, as even a single 30 mm HEI shell is deadly to most aircraft.

Keep in mind that the tracking radar does not work well at low altitudes, and will periodically stop tracking a target in order to scan for more incoming planes.

If forced into an anti-tank role, the AMX-30 DCA should be played as a support vehicle. With only 53 mm of penetration stock, it is unable to kill anything but IFVs and other SPAA. However, the 30 mm API and HEI rounds are incredibly potent at destroying tracks and damaging barrels, enabling you to assist teammates in killing tanks.

If facing enemy tanks alone, make sure that they are isolated before attempting to disable them.

Ideally, the enemy should be unaware of you and be flat-on (i.e perpendicular). From there, check to see if your belt has enough penetration to overcome his side armour. If it does, aim to take out his gun first (shoot directly below the turret), then his crew (driver's compartment, any survivors in the turret).

It was developed to be used against low-flying aircraft and low-altitude attacks with its two Hispano-Suiza 30 mm 831 A automatic guns coupled to an Oeil-noir fire control system. This system had already been installed on the AMX-13, in lieu of a heavier chassis, using a turret designated the S 401 A. Although this vehicle began production in the year 1962, the introduction of the AMX-30 meant that the S 401 A turret could be mounted onto a much larger chassis which improved the agility of the vehicle. It also provided a much more stable platform and with double the ammo capacity of 1,200 rounds instead of the 600 that the AMX-13 could carry.

The guns were designed to shoot in bursts of 5 rounds, or even 15 rounds per burst with the cyclic rate of fire of 650 rounds a minute. They were controlled by an analogue computer that received information from a Doppler radar, which could be folded into an armoured box when not in use to protect from damage. The fire control depended on visual tracking, meaning it could not be used in night time.