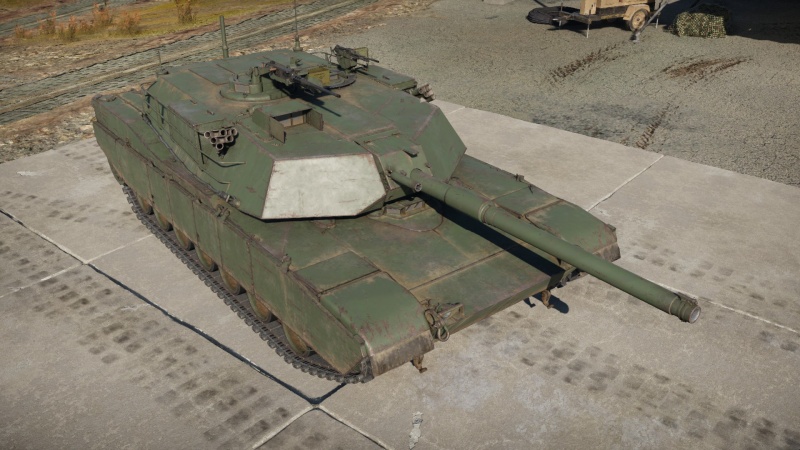 In-game, the M1 Abrams is a fairly quick main battle tank. It accelerates quickly, and will hold a speed of 32 miles an hour (52 km/h) over rough terrain. On city maps or paved surfaces, an M1 Abrams can easily reach its top speed of 45 miles an hour (72 km/h), thanks to its monstrously powerful turbine engine. With three speeds in reverse, it is also capable of an impressive 25 miles an hour (40 km/h) to back away from troublesome situations.

The M1 Abrams also suffers from a raised engine deck. As such, its capacity for "over the shoulder" shots and shots directly over the rear is very limited, because the engine deck prevents lowering the cannon.

Armour is decent, with an heavily sloped hull which can sometimes ricochet shots, sometimes into the turret, which may cause shots to go trough the turret ring or disable the gun barrel and or mantlet.

The turret fares much better against incoming shots, it can consistently stop most lower penetrating shots, it should however not be relied on, shells with over 440 mm of penetration will go straight trough the turret front, which are more than common at this Battle Rating, and even slight angles will drastically reduce the protection the turret provides.

The gun mantlet is also huge and all APFSDS and HEAT-FS rounds it faces can go trough (though this is a weakspot all vehicles have). Like most western MBT's, survivability is good, with the crew being far apart from each other aswell as wet ammo racks

Gun performance is adequate, while the shells are are good against angles, can penetrate weakspots and the sides of enemy vehicles, with ease. At far ranges the gun can struggle, especially against enemies in a hull down position for example: most Russian MBTs in a hull down position only have the following weakspots, gun mantlet and the driver hatch window, located just below the gun.

With three machine guns (two light 7.62 mm and one heavy 12.7 mm), the Abrams is well equipped at dealing with helicopters and lightly armoured SPAA.

Due to its unreliable armour, it is suggested to always try to find a sniping spot; in the maps where it is not an option, advance facing forward after checking for enemies. As long as your armour faces the enemy, you are relatively safe. When defending, go hull-down. Make sure there are places to retreat to if needed, and take advantage of the reverse speed and smoke grenades to run from ATGMs. Use the rangefinder when you can, but if the target is moving, you will probably miss. Try to guess based on experience if it comes to it. A good tactic would be to bind RMB to rangefinding and the mouse wheel for elevation adjustments. The M68A1 is a very good gun, but at 10.0, even with APFSDS, it struggles to penetrate many enemies even in the LFP, and trying to fight any soviet MBT in close quarters is just as fun as getting kicked in the teeth but thanks to its good zoom and field of view, a good way to play it safe would be sniping from far away and hoping to get lucky shots, since the ammo rack can hold 45 rounds. It is suggested to use the M735, since at distance many rounds will not hit the target and the M774 costs 600 SL to fire and has only got a better angle penetration. Although it has a low penetration, the M735 and the M774 are still APFSDS, and as such, you can get a penetrating hit on an enemy's side even with a very low impact angle.

Once the unsuccessful joint German-American MBT-70 project had been shut down in 1971, the Congress redistributed funds to the further development of the XM815 project, later known as the XM1 Abrams. The development of the XM1 Abrams was a competition between two designs of the Chrysler and General Motors companies, respectively. Early July 1973 marks an important date for the project after representatives of both companies travelled to Great Britain to witness the development of the new composite armor, named Burlington. Impressed by what they saw, both companies decided to reevaluate and optimize their designs' armor layout to increase its effectiveness, with General Motors changing the front shape of the turret to a sloped surface, whilst Chrysler retained its vertical design. By 1976, the XM1 prototypes were being readied for testing, with the finishing touch being the installation of the M68 cannon.. Testing of both prototypes took place in the presence of the new German Leopard 2 tank, which was shipped to the U.S. for comparison purposes. Once testing was concluded and the results evaluated, the turbine-powered Chrysler design was proclaimed the winner of the competition and thus the Chrysler design would soon enter production as the M1 Abrams.

The M1 entered production in 1979, with the first production version M1 leaving the factory floor in February 1980. Production of the M1 continued until 1985, with an improved M1IP version being produced briefly between 1984 -1986. By 1985, several thousands of M1s had already been manufactured and put into service. In August 1985 however, the M1 was outfitted with the license-built version of the Rheinmetall 120mm gun, as found on the Leopard 2 tank and subsequently entered production as the M1A1 Abrams. Following this modification, earlier M1 units would progressively be upgraded to M1A1 standard, but this is a story for another devblog in the future. The M1 Abrams saw the most active service with US forces primarily in operations in the Middle East, but known operators also include Australia, Kuwait, Saudi Arabia, Egypt and others. Nonetheless, the American M1 Abrams is one of the most successful and widely fielded modern-day MBTs in use anywhere in the world, and rightfully deserves its iconic status alongside other American legends such as the M4 Sherman and M60 Patton, to name but a few. The fact that the M1 Abrams is still being manufactured and used today, almost four decades after its introduction, serves as a testimony to that statement.