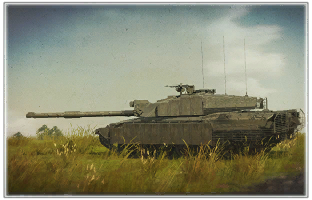 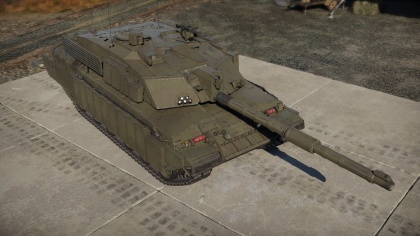 The Tank, Combat, 120-mm Gun, Challenger 2 (Dorchester Level 2F) is a rank VII British medium tank with a battle rating of 10.7 (AB/RB/SB). It was introduced in Update "Starfighters".

The Challenger 2 (2F) was created to give increased protection against shaped charges and as much is evident when evaluating the armour. While the internal composite armour remains the same from the previous variant, a large amount of external composite and ERA has been added to the hull front and sides as well as the turret sides. Additional slat armour has also been mounted to the sides and rear of the hull and turret.

With the only real change being the additional external armour, the same structural weakspots that exist on the Challenger 2 remain on the 2F. The large driver's port is an obvious target for enemy armour, which can penetrate it at almost any angle due to only RHA protection. Kinetic rounds aimed through the driver's port from the direct or near-direct front will often go straight through the tank, often taking several crew members, the cannon breach or the engine, occasionally resulting in a knocked out crew. Chemical rounds are less effective but fragments may set off the charges stored next to the driver, especially when fired at from above.

The gun mantlet is also a large weakspot, although kinetic rounds will be most effective, as chemical rounds will often only knock out the cannon breach or be blocked by the optics mounted at the top of the gun, which will allow the tank to pull back and repair provided it has the distance to do so. Kinetic rounds will often not fragment properly, going straight through the back of the turret, at max taking out two crew members due to the breach acting as a shield to the other side of the turret. Only when attacking from above will rounds have a significant chance of detonating ammunition due to the 2 stage system used by British tanks. Any ammunition stored in the turret will be warheads which are not able to be detonated.

As with the last variant and many other MBTs, the sides have no real kinetic protection, however the 2F has additional protection against chemical rounds. Most shots to the side of the front half of the turret have a high likelihood of taking out the cannon breach and a crew member, occasionally knocking out 2 or 3 crew. Any shots the the back half of the turret from the side will be ineffective due to the large amount of empty space. Aiming low on the tank's hull will give the best results for penetration and ammo detonation. Despite the additional ERA on the lower frontal plate, chemical rounds such as the German DM12A1 can still get through, and can get through the side mounted composite screens on a flat angle (0-25°).