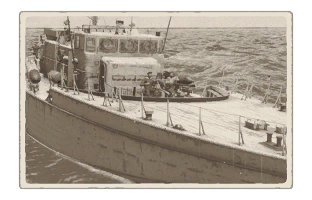 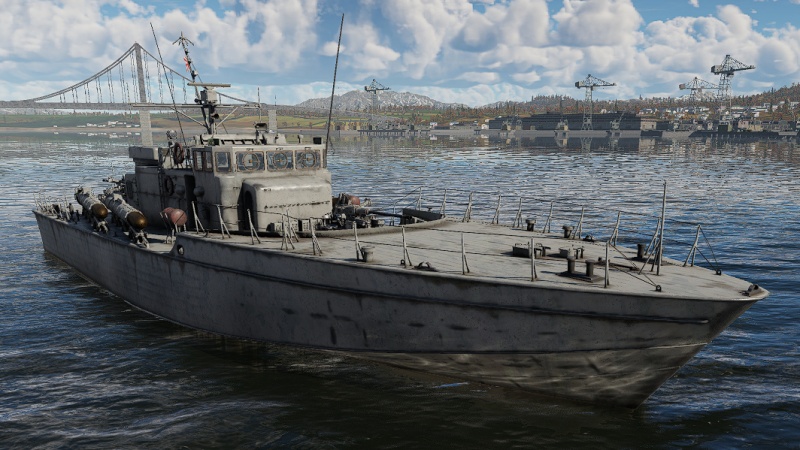 Each Bofors gun is placed on front and back of boat. This mean that both of them have large natural blind spot. These are most effective when being used against small craft such as torpedo boats, motor gunboats, minesweepers and submarine chasers. In its BR class, it is possible to face larger threats including destroyers which will mostly be unharmed by this gunfire. Aircraft are also excellent targets and can be brought down with accurate fire. You can load Universal belt, HE belt or AP belt. Usage of these belts is similar to lower rank boats; Universal is good for start but later you should stick to HE or AP by what kind of target you encounter. The downside of the primary armament is that they can easily overheat if you fire for too long.

This ship is armed with four Mk.16 torpedoes on its side. They are offset at a slight angle so you can't release all four of them at once on one target. The Mk.16 torpedo has a good speed of 85 km/h and 6.4 km range should be enough for close and mid-range combat between islands. The true advantage of the Mk.16 is 915 kg of TNT which is second highest in game and highest used on torpedo boats.

Usage of this boat is similar to Type T-38. You have very capable armament against other boats but that's about it. Type 11 is fairly big compared to other boats and mobility isn't its strong suit either. A good way to engage opponents is to stay back and use your fairly powerful armament against them, though the weapon placement means that if you want to use your maximum firepower you have to show your full profile to enemy. Try to look for islands and corridors where you will be hidden from high calibre long range cannons and ships with heavy armament that are common at this rank. You should not even try to engage bigger ships with cannons in open waters as they will notice you due to your size and can give you critical or fatal damage with a single shot. Using torpedoes is very situational; the only way to use them is to sneak around islands and attempt to surprise unwary destroyers.

In anti-aircraft role you have to rely on yourself as this boat doesn't have any secondary or AA armament. Although Bofors guns can be very effective against airplanes you should focus on ships which are a bigger threat for you.