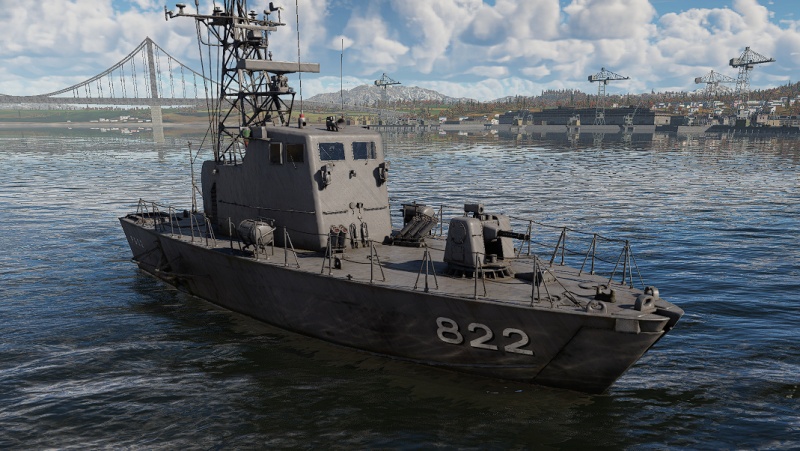 The No.1-class, PG-02 is a premium rank IV Japanese motor gun boat with a battle rating of 3.3 (AB/RB/SB). It was introduced as a premium pack in Update 1.89 "Imperial Navy". It was removed from sale after the 2020 New Year sale and was reintroduced in 2021 as a premium vehicle purchasable in-game with Golden Eagles

The PG 02 is a fast, powerful and very agile fighting ship that could be compared to a piranha; it's very fast and agile, with speeds up to 129 km/h in Arcade and 96 km/h in Realistic battles. Equipped with a very deadly 6-barreled 20 mm JM61 rotary cannon with 3,000 rounds of ammunition mounted on the deck, and a Mark 36 SRBOC decoy system with 12 smoke rounds.

This ship has a high profile, it does not have the sleek and stealthy appearance of the Jaguar-Klasse (140) or the Pr.1124 (1940). It is also possible to get stuck in low ceiling caves. It offers higher top speed, far more spacious internal design, faster acceleration and a steel construction, unlike the Jaguar-Klasse (140) which is made from a wooden construction and is slightly slower.

A PG 02 uses a sleek hydrofoil design, which allows the ship to gain this vast speed. Another advantage of the hydrofoil design on this ship is that enemy torpedoes can pass under it when in the broadside position, since the hull of the ship floats above the water, like a cloud in the sky.

The manoeuvrability of this ship is good. It's extremely fast in a straight line, provides good handling and responds well to sudden movements. With maps which have mud & sandbanks, coral reefs or underwater objects the hydrofoil will get the ship stuck on them. It's incredibly important to be vigilant in the surroundings.

For example: if the cap zone is near an island make sure to slow down and stay away from the shoreline or risk running aground and becoming an easy target for enemy vessels.

The PG 02 carries a JM61 cannon, with a fire rate of 3,000 RPM or 450 RPM with the 'Autocannon' modification. With APDS rounds available to this rotary, the 3,000 RPM option chews up just about every boat, and can even be used to decent effect against destroyers. Aiming for large ships' guns will allow you to freely gun them down. and the APDS will cut through most small ships, killing them within seconds. It's a fairly accurate gun, however it can bounce a lot in heavy waves and it's hard to lead with past 2.5 km, though your max range is around 3 km anyway so that shouldn't really be an issue.

The 130 mm Mark 36 SRBOC decoy system is a short-range mortar which launches chaff into the air around the vessel. In-game it allows the captain to launch two smoke grenades in the air, which detonate above and on either side of the boat. However, there are currently no guided missiles to be confused by chaff and thus they operate as smoke grenades.

The system is armed with 6 volleys of 2 grenades, one off each side of the vessel aiming forward and can be seen in front of the bridge. The system is present on the vessel even if the modification is not selected. By default, it is not bound to any key and thus is not available in-game unless a binding is set in the controls menu.

The smoke clouds in-game are less effective than the default smoke screen as their coverage area is more limited and gaps can remain in the smokescreen allowing an enemy to continue tracking the screening vessel.

The PG 02 only has one gun. If the gun is knocked out in battle, or has to reload, the ship does not have anything else to use to defend itself in combat. However the JM61 20 mm rotary cannon is able to destroy enemy ships rapidly with ease, the APDS rounds making short work of enemy ships.

Using the JM61 it has two firing options, with or without the Autocannon modification. The modification prevents the gun from overheating by limiting the gun to fire at a slower rate of 450 rounds per minute. Without the modification, the gun can overheat very quickly. To reduce this, fire using a one to two-second burst and allow at least one second to cool down after firing the burst. This reduces the overheating, by allowing it to cool down to a controllable level which in the long term allows for more ships to be destroyed at a faster pace. It is not recommended to take the Autocannon modification, as it limits the effectiveness of the gun while its only benefit can be compensated with good trigger discipline.

It's very important to note that the ammunition can be consumed very rapidly, as the cannon was designed to fire 3,000 rounds per minute! It requires up to 23 seconds to reload and the fastest reload with an ace crew qualification is 20 seconds. It's very important to make every burst count, for example targeting other torpedo ships, the fastest way to sink them is to aim for the torpedoes which will detonate and cause the enemy ship to explode and sink!

One of the additional valuable advantages the PG 02 has is its radar. The radar is able to target enemy aerial units and predict their lead.

Dealing with larger targets such as Armoured Gun Boats or Frigates, these are heavily armoured and pack powerful cannons, which can easily destroy the PG 02 in a single shot with a well placed HE round.

The best way to knock these floating sea tanks out is to use APDS rounds and target the following critical elements:

It is also possible to encounter destroyers. The PG 02 can be easy destroyed by a destroyer at any range. It's important to note that the PG 02 will be unlikely to sink a destroyer, though it may be able to cause a substantial amount of damage to it. However to do this, close range is needed, aim for the turrets and knock them out first, then the torpedo tubes - if the destroyer sees this ship approaching, it will lock on and destroy it.

Aircraft pose a major threat to this ship. Since it lacks any armour even the smallest calibre rounds are able to cause critical damage. When an enemy aircraft is detected, use the decoy system to cover the surroundings in smoke and hide until it has moved onto a new target. However, the PG 02 is able to take down enemy aircraft, rapidly fire a short quick burst and aim for critical elements: engine, flight deck and wing spars. The enemy aircraft will soon be diving into the clear water.

A variant of the Italian Sparviero class missile boats, the Japanese 1-go class boats were chosen to replace the aging PT 11 class of torpedo boats, with the Japanese navy acquiring the license for domestic production in 1991, with 3 being made. Unlike the Italian boats, the 1-go class were fitted with a 20 mm M61 Vulcan rotary cannon and different anti-ship missiles.

The PG 02 No. 822 was laid down on 25th March 1991, launched on 17th July 1992 and commissioned into the Japanese Maritime Self Defence force in March of the following year. It would stay in active service until 6th June 2010.