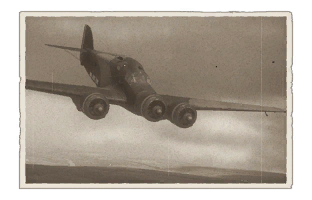 Due to its relatively low Battle Rating, the three-engined SM.79 serie 8 enjoys a relatively high speed for a bomber against most of the lower ranked opposition it faces. This aids its survivability, particularly in a shallow dive. Unfortunately, it is rather lacking in bombload options compared to the He 111s and Ju 88s and also has rather poor defensive fire arcs. Unlike the German bombers, however, it is armed with 12.7 mm Breda-SAFAT machine guns which can pack quite a punch against the flimsier aircraft it faces. The pilot also controls a fixed forward-firing 12.7 mm Breda, which is otherwise uncovered by any defensive armament. This gun can be useful for strafing light vehicles and trucks that will be encountered frequently in low-rank battles and can be used to shoot down other aircraft. It is somewhat more manoeuvrable than the He 111 H-3, but the Sparviero is by no means a fighter and will rapidly lose energy in turns. With the ability to carry 500 kg bombs, the SM.79 can use these to more easily take out pillboxes and heavier tanks, although this reduces the total bombload to only 1000 kg as opposed to 1250 kg with 250 kg bombs.

A mixed-construction monoplane with a retractable landing gear system including tail wheel. Crew: 4-5. Created in the SIAI (Societa Idrovolanti Alta Italia) design firm, led by Alessandro Marchetti, as a passenger aircraft. The prototype SM.79 in passenger configuration (civil designation I-MAGO) made its first flight on October 8, 1934.

The SM.79 was powered by three 9-cylinder radial air-cooled Alfa-Romeo 126RC34 engines with 780 hp and a metal variable-pitch SIAI propeller. The typical wide box-shaped fuselage of passenger planes was retained. But the characteristic dorsal “hump” in the fuselage was implemented and became the SM.79’s lifelong hallmark. Because of this, the aircraft earned the nickname “Gobbo” (“Hunchback”).

In the tail section, under the bomber’s fuselage, a pivot mount was installed with a 12.7-mm Breda SAFAT machine gun with 500 rounds of ammunition. In addition, a 7.7-mm Lewis machine gun with a rotary magazine (and 485 rounds of ammunition) was installed inside the fuselage. It was specially installed so that it could move from one side of the aircraft to the other. The gun was fired through large rectangular blisters located on the plane’s port and starboard side.

The bomb bay was located in the central part of the fuselage and was offset slightly to the right to allow access to the aircraft’s tail section. It could accommodate up to 1,200 kg of bombs in various combinations (2 x 500 kg, 5 x 250kg, 12 x 100 kg, or 12 12kg canisters of small fragmentation bombs). All of the bombs were hung vertically, except the 500 kg bombs, which were installed at an angle.

Once officially approved, the bomber was called the SM.79 “Sparviero” (“Hawk”), but the name failed to stick, and combat units continued to call the plane the “hunchback”."