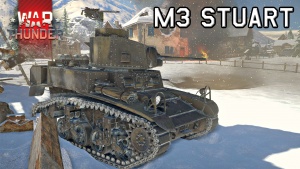 Being a light tank the M3 Stuart has fairly thin armour, it can generally protect against most machine guns but will usually not stand up against the main weapons of most enemy tanks at its BR. The inside of the tank is fairly cramped with the two turret members standing, this means that the likelihood of a crew member being hit is fairly high.

The M3 Stuart can reach a speed of 49 km/h off road and up to 50 km/h on road. It can feel sluggish while turning at lower speed as it lacks neutral steer, but when moving forward the turning is much smoother and quicker. The vehicle reverses at up to 5 km/h which while somewhat slow, is still usable in most situations on the battlefield. 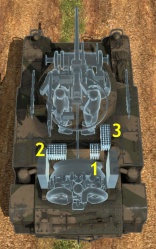 Ammo racks of the M3 Stuart

Alongside the main gun the M3 has 4 additional 7.62 mm M1919A4 machine guns. First MG is in a coaxial mount aligned with the gun, second is mounted on the turret top in a pintle mount and the last two are mounted on the hull sides in a fixed firing position. The M3 does also have a hull front MG but this cannot be fired.

When driving the M3 Stuart it is best to maintain some distance from enemy vehicles, this is advisable due to the somewhat thin armour and closely packed crew that you have to work with, if you are on a smaller map where keeping distance from enemy vehicles is not possible then it would be a good idea to use buildings and landscape features for cover and to keep your vehicle concealed.

In majority of cases you will be able to go through the frontal armour of enemy tanks (best pen is 75 mm) although some vehicles with heavily angled front armour may be able to stop your round being effective, a consistently effective tactic is to flank an enemy vehicle and fire into the side of the crew compartment, aiming near the turret to disable their ability to fire is a good way to use your first shot, thanks to the quick (at best 2.9s) reload of the M3 you can then put second and third shots into the enemy if needed to finish off their crew.

Another aspect worth mentioning here is the mobility of the M3, while not the fastest vehicle at its BR it certainly still has competitive mobility that will allow it to reach capture points in quickly or get to a good camping or flanking position before most enemy or friendly vehicles alike.

Specific enemy vehicles that bear mentioning are any German vehicles with the 20 mm KwK/FlaK38 cannon, this gun might be small but can have up to 64 mm of pen, which is enough to go through the M3 Stuart at almost any point even frontally, these guns can also fire 10 rounds at 280 rounds/min before having to reload the clip, this means that they will very easily take out your crew before you have a chance to respond, as far as countering the best chance you have is to angle your frontal armour which can make it difficult for the PzGr 40 rounds to pen, but generally speaking you will not stand much of a chance against vehicles equipped with this gun if you are openly exposed to their fire. 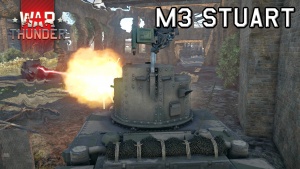 An M3 Stuart attacking a BT-7

At the beginning of 1940 the Ordnance Department put together technical requirements for a new tank, the need for which was clear at the beginning of World War II. The first prototype was refashioned after the M2A4 at the Rock Island Arsenal. The tank had a riveted turret with few viewing slits, and the new M22 mantlet had thicker armor. The hull's frontal armor was also thickened to 45 mm and the turret to 38 mm. The tank hull was assembled from rolled armor plates on a frame made from angle sections and flat bars using rivets, though later releases were partially welded. From the end of 1941 to the beginning of 1942 a lack of standard gas-powered Continental aircraft engines forced some tanks to be outfitted with 265 hp Guiberson T-1020-4 diesel-powered, nine-cylinder, air-cooled radial engines capable of reaching 2,250 rpm. The diesel tanks could be recognized by their Vortex air filters and were generally designated M3 diesels. At the end of 1941 the tanks with carburetor engines were equipped with two cylindrically-shaped external fuel tanks, each with a capacity of 102 liters, that were connected to the engine supply system. After being exhausted, the external tanks could be jettisoned by the crew without leaving the tank. Adding the new tanks doubled the M3's range.

M3 Stuart light tanks were also delivered to the Red Army and the UK via Lend-Lease to be used on all fronts in World War II beginning in 1941.