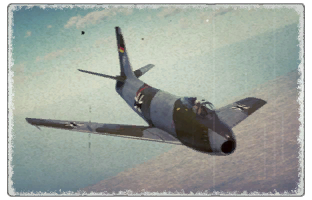 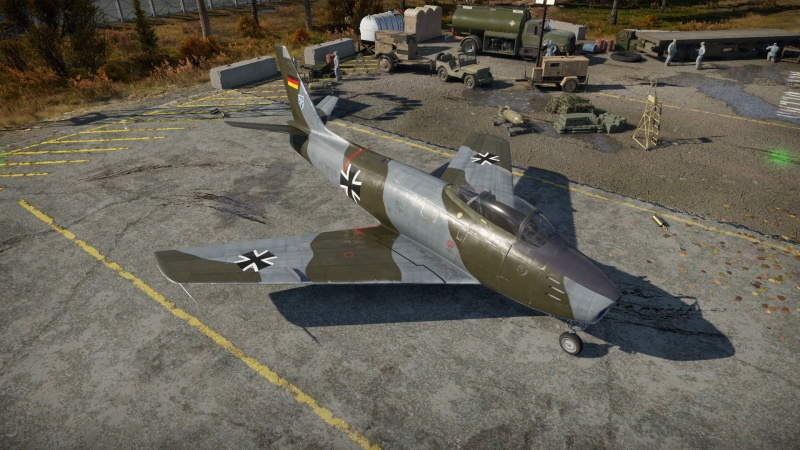 The CL-13A Mk 5 (Germany) can be outfitted with the following ordnance:

The CL-13's energy fighting capabilities outperform most if not all enemies of the same BR. Engagements should always occur on your terms, if you are in a bad situation make use of the Mk. 5's acceleration and roll rate to pull away if possible, then re-engage in an advantageous position.

The Mk.5's main pitfall is its lacklustre armament of six M3 machine guns. Often, sustained fire is the only way to down an enemy short of a pilot snipe. Snapshots will often result in a few hits and an enemy still very much in the fight. However, the high velocity and large ammo count makes accuracy a secondary concern. Pilots should not hesitate to douse their enemies in a hail of machine gun fire, as even a few hits can cripple the enemy and open them up for a second, fatal pass. Engaging in head-on passes with enemies sometimes leads to success owing to the velocity of the M3s, but pilots should be careful to start firing at significant distance and peel off before the 1.0 km mark to avoid enemy fire. Whilst dogfighting, the best shot of finishing engagements lies in exploiting the CL-13's energy superiority and forcing the enemy to bleed speed to the point where they are sitting ducks for your guns. This should not come at the cost of losing one's own speed, however, as the Mk. 5's high speed manoeuvrability falls off very quickly and can leave you as the sitting duck instead.

The CL-13A Mk 5 is equipped with an AN/APG-30 rangefinding radar, located in the nose of the aircraft. It will automatically detect other planes within the scanning area and display the range to the closest target. It is linked with a gyro gunsight and can help with aiming at close range.

The CL-13 series of aircraft were built by Canadair under licence from North American Aviation. These fighters would be operated by Canada until 1958, and a variety of other nations until much later, with the last variants being retired by the Pakistani Air Force in 1980. There were two major production runs of the aircraft. The first, the Mk. 2 and Mk. 4s with just under 1,000 built, were very similar to their US counterparts, with minor differences. The second run, the Mk. 5s and Mk. 6s of similar numbers, were patterned on the later versions North American Sabre, with larger wings for improved manoeuvrability. The major difference lay in the replacement of the General Electric J47 engine with the locally-designed more-powerful Avro Canada Orenda. The Mk. 6, with a more powerful two-stage version of the Orenda and improved control surfaces, is generally considered the best of all Sabre variants.

On 30 July 1953, the first Sabre Mk.5 flew with the Orenda 10 engine, which gave it a clear rate of climb and ceiling advantage over earlier variants. This improvement was accompanied by a new oxygen system and superior manoeuvrability and low-speed characteristics achieved by increasing the wing chord by six in. (15.2 cm) at the root and three in. (7.2 cm) at the wing tip. The aircraft also made use of a small vertical wing fence, a modification originated by North American on the F-86F, which dramatically improved manoeuvrability. Earlier variants of the CL-13 were equipped with leading edge wing slats that were removed in the Mk.5, leading to increased landing speed and considerably degraded low speed handling. The increase in engine power also came at the cost of range, a full 20 percent less than that of the F-86F. Canadair built 370 Mk. 5s with the majority designated to replace older Sabre variants in RCAF air squadrons.

Service in the Luftwaffe

In 1956 the newly-revived West German Luftwaffe ordered 225 Canadair CL-13 Mk. 6s to outfit 3 day-fighter wings. In advance of the delivery, 75 retired Royal Canadian Air Force Mk. 5s were supplied to the training unit Waffenschule 10 to facilitate the conversion of pilots to the Sabre. By April of 1960 about 25 of these aircraft remained airworthy, down from a peak of 65 in early 1959. All of the remaining Mk. 5s were scrapped or sold by March of 1962.[1]