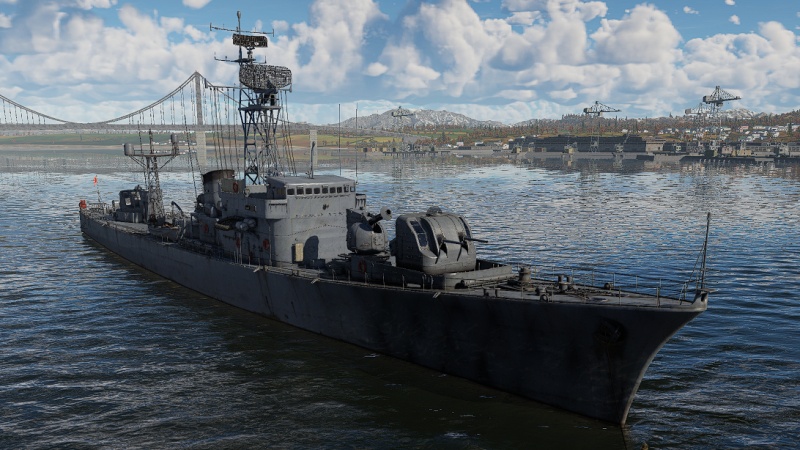 Isuzu carries four 3-inch Mk.33 automatic cannons in twin installation. The turrets are placed at the front and back of the ship and can effectively cover your vessel from all sides. HE shells can take care of unarmoured targets especially small boats which can be destroyed within a few shots. For armoured targets and destroyers, you can choose APHE shells but you still have to keep in mind that it is a 76 mm multi-purpose cannon. HE-VT shells are good for use in AA roles as there is not any secondary armament you can rely on.

As one of the special armaments, this ship carries Mark 108 Weapon alfa without any upgrades. This is an anti-submarine rocket, but in-game you can only use it for close-range combat against ships. It shoots RUR-4 rockets that have a speed of 306 km/h and carries 113 kg of TNT, which is equal to small torpedoes. The biggest disadvantage is the range, which is only 800 m especially, combined with the fact that fast boats can easily dodge these rockets. Blindspot in front of the ship (thanks to the main armament turret) makes this weapon very situational.

After unlocking the "Bomb mortar" upgrade, you can equip 2 x Mk. 6 depth charges which are projected from mortars. These weapons have an extremely limited range (only a few hundred metres off each side of the ship) and would only be used during a close-in brawl. Keep in mind that the depth charges do take a few seconds to fly through the air and sink before they detonate, so be aware of timing their firing. Each Mk. 6 depth charge has an explosive charge of 136 kg TNT, which will obliterate any small craft and deal significant damage to a larger ship.

Isuzu has upgraded firepower from its in-game predecessor Chikugo but it shares the same imperfections of not very long-range and small calibre compared to opponents you will meet. That means you should stick to the same tactics that work for Chikugo, such as not attempting to battle against long-range destroyers and rather focusing on boats and sub-chasers. You should not take this ship into the late game as there isn't any anti-air armament and you will be easy prey for bombers that can overwhelm you if coming from different directions.

During the late 1950's, the Japanese Maritime Self-Defence Force (JMSDF) was planning on expanding their destroyer fleet with a number of new ships intended to complement the recently modernized destroyers leased from the US Navy. However, these plans were revised shortly afterwards due to the JMSDF realizing that their frigates in service at the time, as well as being older leased US vessels, were starting to show their age and were getting ever closer to their planned retirement, scheduled for the early 1960's.

As a result, development of a new frigate began in the late 1950's, eventually resulting in the creation of the Isuzu-class. The first two ships of the class, Isuzu and Mogami, were laid down in April and August of 1960, respectively, while the remaining two ships, Kitakami and Ōi, were both laid down in June of 1962.

The first batch of ships entered service with the JMSDF in 1961, with the other half being commissioned in 1964. Ships of the Isuzu-class served faithfully with the JMSDF until they were decommissioned in the early 1990's, also serving as a base for the development of its successor design - the Chikugo-class - shortly after their introduction.