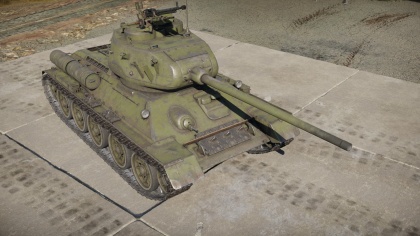 The Panthers are one of the most common tanks around 5.7, and they post a great threat with their deadly long 75mm cannon, thick frontal armor and adequate speed. You want to avoid engaging them at long range as the T-34 has only x3.5 scope magnification, making long range shooting super hard. Engage the Panthers within 500m and avoid shooting their frontal hull. Their number 1 weak spot is the gun mantlet, which is only 100mm and has a flat part in the middle. That is where you want to aim at, the T-34's APHE has sufficient damage to instantly destroy the Panther even form its turret. The second weak spot is of course the side, guaranteeing an instant kill. Generally APHE is enough to deal with the Panthers, and no APCR is needed.

For the Tiger II P, also aim at the vertical area of the frontal turret which is also 100mm. The best tactic is still flanking.

The Tiger's weak spots are the opposite with the Panthers. Their hull are unsloped and rather thin, while the gun mantlet is weirdly shaped and can absorb quite some shells. The best engaging range remains the same, within 500m. If the Tiger is angling, aim at the turret ring to disable the gunner, if not destroying it. Or aim at the hull side below the side skirt, which is only 60mm. If it is not angling, aim between the driver's vision port and the MG for an instant kill. Avoid shooting at these two parts as they tend to bounce / absorb shells. For the Tiger E, don't shoot at the lower glacis as there will be add-on tracks installed there, making it harder to penetrate.