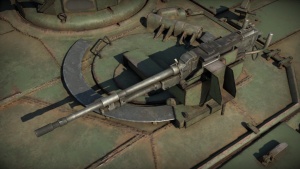 The M240 is an American 7.62mm General Purpose Machine Gun. The M240 is the American designation for a version of the Belgium FN MAG GPMG, designed for use as a co-axial machine gun for tanks In game the M240 is predominantly found as a co-axial (and on some tanks roof-mounted) machine gun on high rank American tanks, as well as on the Type 89. Being only a 7.62mm machine gun it is largely ineffective against all but the most weakly armoured, or open cabin, vehicles.

Despite being a version of the FN MAG the M240 performs differently. The M240 has the highest rate of fire of any American (or British) 7.62 mm machine gun at 750 rounds per minute, and a decent belt capacity. The Ballistic performance is the same as other 7.62 mm machine guns.

The M240 can only be equipped with one ammo belt consisting of one Armour Piercing (AP) bullet, followed by one Tracer (T) bullet. Neither bullet has much penetration (maximum of 10mm), however the AP bullet performs much better than the tracer bullet.

The M240 is an American 7.62mm General Purpose Machine Gun, cambering the 7.62×51mm NATO round, it is an American built copy of the Belgian FN MAG GPMG. The history of the M240 began with the failure of the M73 (7.62 mm) co-axial machine gun, being used on American tanks in the 1960s and early 1970s. The despite being designed from the ground up as a tank co-axial machine gun the M73 proved to be very poor at the role due to an extremely high failure and jamming rate. Despite attempts to fix the M73 the issues remained and in 1971 the US Army looked to replace it. A competition was launched to develop a replacement, however this was cut short in 1973 by the Yom Kippur War. The Israelis had used the M73 on their Magach (M60) tanks during the war and it's performance had been so dire that they deemed it unfit for purpose and demanded the Americans replace it with something better. The program to develop new machine guns was abandoned and the Army looked to existing machine guns to fill the role. In the end the two final candidate were the FN MAG 60-40 and M60, with the MAG winning due to better reliability.

The FN MAG was adopted as the U.S. Army's standard vehicle machine gun in 1977, replacing the M73 on vehicles. The M240 also proved popular with other section of the US armed forces and as an infantry gun. The M240 slowly replaced other American machine guns such as the M60.