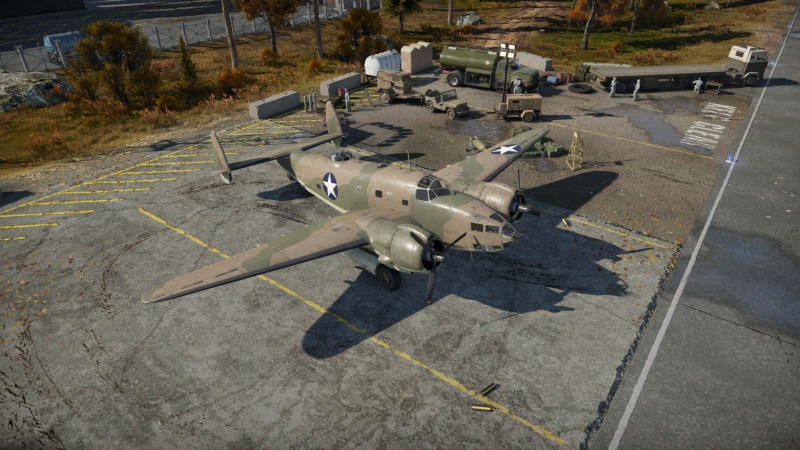 The B-34 is a typical American bomber in the sense that its decent payload is outdone by its defensive armament. While its maximum payload and the ability to carry a torpedo is nice, it's not necessarily as good as its ability to take and give out damage to other aircraft. Start with base/pillbox bombing, and should an enemy fighter come to engage, give him hell with your turrets. Do slight maneuvers constantly to throw off his shots while trying to put as many shells into his engine/pilot as possible. With any luck he will fall out of the sky in no time.

While flying the B-34 you can expect manoeuvrability and speed like few other bombers. Considering you are just a Rank II aircraft you have a good acceleration and max speed, which will allow you to get out of difficult situations, even being able to outrun some lower BR fighters, although never forget to use your turrets to shake enemies off your tail.

Your speed and climb ratio will be superior to most enemy bombers you face, therefore making it an easy task to intercept them. Although try to always keep it under 4,500 m as your engines aren't meant for high altitudes, and you will become a big and sluggish target for any fighter around. As a last defensive manoeuvre in this bomber it is possible to trade some altitude for speed in order to escape from a threat, however keep it at a max speed of 610 km/h IAS since going faster than that will completely lock your surface controls and eventually get you killed.

Given its surprising turn rate and speed for a bomber, mixed with a good offensive power, when used wisely you can successfully intercept enemy aircrafts that aren't yet aware of your position, as well as support your allies if you see an enemy tunnel vision-ed on them, however don't fool yourself into a dogfight since every fighter will outturn you sooner than later.

The B-34 can be outfitted with the following ordnance:

In the hands of an experienced player, the B-34 can be one of, if not the deadliest aircraft of its tier. While being in the bomber line of the tech tree, the B-34 is better suited for use as a frontine bomber, bomber interceptor, and even a heavy fighter in some situations. If played in a bombing role, try to get in low and entice enemy fighters into chasing you while you go for your bombing targets; your powerful 12.7 mm turret will make quick work of most enemy's you'll encounter at its tier. If played as a bomber interceptor, aiming for crucial parts of the target's aircraft (Engine, wings, cockpit, Etc.) with your robust offensive armament will take down enemy bombers quickly and efficiently. Using the B-34 in a heavy fighter role will require the use of your flaps, so make sure to use them when appropriate; as the B-34 has poor energy retention. Head-on's with enemy fighters are ill-advised, as your pilot is quite susceptible to frontal enemy fire as well as your engines that will take damage quite easily.

Your deadliest enemies will be aircraft with heavy machine gun or cannon armament (P-400, LaGG-3-8, Spitfire Mk IIb, Etc.) It is advised to get familiar with using the 12.7 mm dorsal turret while doing evasive maneuvers using flaps for dealing with them quickly before they can do major damage to your aircraft. If they dive on you and fly in front of you for a bit, try to damage them with your frontal armament. Do not let anyone get under your belly, as it is a huge weak spot that knowledgeable players will exploit. In the hands of a skilled pilot, however, you will have no problem going for engine shutdowns or pilot snipes that will quickly send your foes back to the hangar.

In the beginning of the war, the British were looking for a medium-ranged anti-submarine warfare and patrol aircraft to support the existing Avro Anson. The Lockheed company sent a drawing of their model 144 civilian airliner. The British Purchasing Commission saw the design and asked Lockheed to make modifications to the model 14, also known as the Lockheed Super Electra. Modifications include two fixed forward-firing Browning 7.7 mm machine guns in the nose. There was also the installation of Boulton Paul dorsal gun turrets with two Browning machine guns. Some models had beam guns installed, other had different engines or propellers. They called it the Hudson, eventually it needed a replacement. So Lockheed made it bigger and heavier and introduced it as the B-34 Lexington. It went under the US Army as the B-34, and the Navy as the PV-2 Harpoon (V because Vega aircraft division of Lockheed made the Harpoon). In British service it was simply called the Lockheed Ventura.