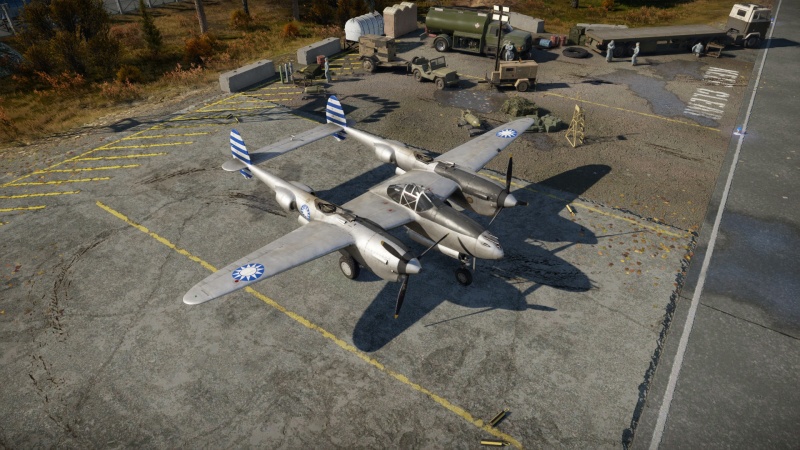 The P-38L-1 (China) can be outfitted with the following ordnance:

There are a few tactics to take into consideration when using the P-38L Lightning. All of them are viable, but some of them require more attention to detail, or else you can guarantee yourself a one-way ticket back to your hangar.

The natural role for the P-38 is the Air Superiority role. When playing in this role, you will often need to side-climb at the start of a match from the airfield because the P-38L is classified as a "heavy fighter" but not an "interceptor". Once you get to an optimal altitude of roughly 4,500 m (14,760 feet) it is paramount you keep your speed up to avoid getting jumped on by some of the better climbing aircraft. When climbing, it is best you keep your speed somewhere in the neighbourhood of roughly 330 km/h (210 mph), to keep your energy up as well. It doesn't hurt if you climb higher, keep your energy and speed constant. Once you have followed the steps to climb to altitude, start scanning for easier targets to support your allies. When you spot an enemy lower in altitude than you, dive down on them and line up your shots carefully- the 20 mm cannon has a good quantity of ammo, but it goes quickly in higher BR battles. Once you have lined-up your shots (preferably around 700-600 m away,) fire a quick burst, then climb away to avoid a counter-attack. This is where the dive-brakes come in great use, as they can keep your aircraft stable when in a dive and prevents the airframe from disintegrating in a dive. The P-38's nose-mounted weaponry will act as a buzz-saw on enemy planes, providing extremely accurate fire. Once you destroy your adversary, start scanning for new targets and eliminate those of the next highest value. Keep your speed, energy and altitude high enough. The recommended ammunition type for this role is the "Universal" ammunition for the .50 cals and the "Air targets" belt for the 20 mm cannon.

It is ill-advised to attack your opponents head-on- especially if it is against an Fw 190, or any Yak aircraft. That being said, getting behind your opponents is the best course of action. This is not to say a successful head-on attack cannot be done. If you have no alternatives but to attack head-on, fire a quick burst, then quickly hit the deck. The nose-mounted weaponry in this scenario is your greatest asset, and the astonishingly good roll-rate of the P-38 can help avoid any incoming enemy fire.

It is not advised that you spend too much time in a turning engagement with this plane. While the P-38L has a phenomenal roll-rate and very powerful Allison engines, prolonged turning will bleed your energy and eliminate your greatest advantage- speed. In addition, you are a rather large target, and getting caught in a turning engagement will only render you a highly exposed target to other enemy planes.

This is the role where paying attention to details is an absolute priority. This is given that the Anti-Aircraft fire is coming from actual players, and not artificial intelligence and one small mistake can send your plane down in a fireball. Nonetheless, the P-38L has all the tools necessary to be a ferocious Close Air Support aircraft. You have the option for two 500 lb bombs suspended underneath the fuselage of the plane or you can choose ten HVAR rockets. The distinguishing part of the Lightning, when used in ground attack, is that the bombs drop independently one-by-one, which allows for a second attack run if one needs to, allowing a chance for further kills. In addition to the options of bombs or rockets, the P-38's weaponry will punish any open-topped vehicles. The tactics for a ground attack are mainly brought out in making diving attacks in Ground RB. However, as mentioned earlier, you must pay attention to your surroundings- as you have no markers for enemy aircraft, and a loss of situational awareness will be your undoing. That being said, approach the battlefield from high altitude, or come in low and fast. When you spot an enemy vehicle, line up your attack run, then drop your bomb when you are close to the ground. Using the dive brakes is extremely recommended, as you can lose control quickly or need to pull up at a moment's notice. It is paramount you do not have "Assault Fuse" for your bombs, as you will be caught in the blast radius. When you have completed your attack runs using bombs or rockets, try and strafe enemy positions to spot for your allies and possibly eliminate enemy Self Propelled Anti-Aircraft vehicles as well. You can also act still as an Air Superiority fighter to keep your friendly ground forces in the game.

Your greatest threats come from the Focke-Wulf Fw 190 A-8, given the speed and firepower it has. You also need to worry about late models of the Bf 109, such as the G-6, G-10, G-14 and the K-4 variants, which have the speed, firepower and even the manoeuvrability to tear the Lightning apart. It is plausible you will face the Fw 190 D variants, which will give you a serious run for your money, as will the Ta 152s. You also need to take into consideration that you will be facing Allied aircraft captured by the Germans- most notable among them are the Tempest Mk V and the P-47 Thunderbolt. The vast majority of the German planes you will be facing have a high climb rate and are excellent energy fighters, which can leave you at a gaping deficit when facing Axis teams.

Japanese planes are notorious for their extreme turning abilities, which usually decimates Allied teams. This does not change in the higher battle ratings. The most dangerous Japanese aircraft that the P-38L Lightning will face is the Mitsubishi J2M4 Raiden, which has a top speed to rival even the Mustang. In addition, the J2M4 Raiden carries an armament of four 20 mm cannons, which will tear the Lightning to bits. Another dangerous opponent for the P-38L is the A7M1 and the A7M2 Reppu, which also have powerful armaments and a tighter turn radius than a Zero.

Any aircraft bearing the prefix "Yak" is going to give you issues. Most notable among all of these planes will be the Yak-3P, as the aircraft has very powerful nose-mounted weaponry and can turn exceptionally well. The Yak-9T will also give you some problems, as the Yak-9T's 37 mm cannon will turn your aircraft into pieces of flying debris with one well-placed hit. The La-7 will also be a viable threat, as it has powerful nose-mounted weaponry combined with amazing capabilities as an energy fighter. Do not head-on any variant of an Su-6 or IL-10, as their weaponry is mainly designed for busting open tanks and pillboxes. Do not tail either of those attackers for long either, due to their 20 mm defensive cannon.

With all the aspects mentioned above, the P-38L is by no means an easy plane to kill. A P-38L pilot will play this aircraft more conservatively/reserved - mostly using it in a Boom-n-Zoom fashion. However, a P-38L is a large target, thus making it highly exposed in a turn. That is the best way to secure a kill on a P-38L. Even if you only set the Lightning on fire, all the fuel tanks are either on the inside of the fuselage or in the wing-tips. That being said, a P-38L pilot will only be able to put out a fire if they exceed the structural integrity of the plane.

In addition, the P-38L has a bubble canopy, which offers minimal protection from incoming fire. Getting a pilot snipe on a P-38L is not totally uncommon.

The P-38L is also a very good energy fighter, thus rendering it able to make some very tight turns, but only for so long. If a Lightning manages to get behind you, try to out-manoeuvre it to then get behind or force it into a vertical scissors fight. In vertical scissors, a Lightning can only pull tight turns for so long before it bleeds too much energy- uses that to your advantage.

Heads-up for German, Soviet and Italian players. While you may have strong nose-mounted weaponry to attack the Lightning in a head-on engagement, the P-38L will make you pay dearly. The "Air Targets" ammunition for the AN/M2 20 mm cannons makes the Lightning an even deadlier foe - especially if you are flying a Yak. If you find yourself facing a Lightning in a head-on engagement, fire a quick burst, then quickly dive to avoid being hit from incoming enemy return-fire.

The Twin-Body Fighter at CBI and Pacific Theatre

The P-38 Lightning was already a rather successful fighter used by USAAF. After successfully shooting down dozens of German aircraft and participating in the hunt for Isoroku Yamamoto (山本五十六), some P-38s were then deployed in China operated by 449th Fighter Squadron and was used as escort fighters along with some P-51B for bombing missions over the Japanese-occupied Hsinchu; while some were used as escorts for F-4/5Es (reconnaissance variants of the P-38). The iconic twin-body design of the Lightning also gave impressions to Nationalist forces and the local Chinese dubbed the P-38 "Twin-Body plane" (雙身機).

Thanks to the extended range of P-38, they could reach over the skies of the Korean Peninsula and even the outskirts of Japan at Kyushu, some records even suggest that these F-5Es, operated by 21st Photographic Reconnaissance Squadron, helped USAAF on delivering nukes to Hiroshima and Nagasaki.[1]

Myth of P-38 Series in ROCAF

Due to the lack of information on the usage of P-38 interceptors by the ROCAF, there isn't too much information on whether they fought with the Japanese or later PLAAF during the Civil War; but the recon variant, F-5E, was used rather extensively by ROCAF before the end of WWII and some 43 of them were delivered to ROCAF after the war.[2]

Current historic research with the built number and accounting records from the USAAF shows that there isn't any direct evidence of P-38L interceptors being delivered to ROCAF, but instead P-38 based reconnaissance aircraft designated F-4 and F-5E. The only known loss of an F-5E over PLAAF (albeit piloted by Soviet pilots) was by Keleynikov Yuriy Yakovlevich (Келейников Юрий Яковлевич) of 29th GIAP, 106th IAD.[3][4] While F-5Es successfully hinted at the existence of PLAAF jet fighters from recon photos during a flight to Shanghai, forcing ROCA to retreat from Zhejiang costal islands, in just a few years (1953) at the advent of the jet age, F-5Es were first replaced by F-6s (F-51D or K Mustangs reconfigured for reconnaissance), then newer jets like RF-84F or RB-57D.[5]