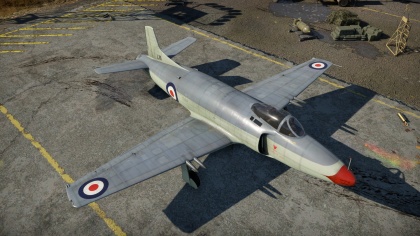 Following on from the Sea Fury in the Fleet Air Arm branch is the first operational carrier-based jet within the Royal Navy’s arsenal, the Supermarine Attacker. The Attacker is Britain's first Naval jet and offers good all-around performance for a first generation jet design as well as a ground attack and fighter bomber payload capabilities for a variety of situations. Available to research after the Sea Fury, the Attacker is a different approach to jet fighter aircraft by comparison to the Meteors, Vampire or Venom.

The most unique and unusual trait of the Attacker is its taildragger configuration and wing mounted armament. As the wing and undercarriage were shared with another of Supermarine’s aircraft, the Spiteful, the Attacker is the only British jet of the period to have a wing mounted cannon armament. Unlike the other British jet fighters which adopt nose mounted configurations, the 4 x 20 mm Hispano Mk V cannons on the Attacker does require careful use of convergence much like the Sea Fury and Seafires before it as a result of their positioning.

Mounted in pairs with two in each wing, 624 rounds of Hispano ammunition is available to the cannons providing a greater capacity than the piston fighters before it. The Attacker can also mount 2 x 500 lb or 1,000 lb bombs as well as 12 x 76mm RP-3 rockets with the GLBC Mk 3 and GRC Mk 8 Modifications respectively. This combined with the "Universal" or "Ground Targets" belts allows the Attacker to live up to its namesake, should pilots choose to use it in the fast ground attack fighter-bomber role.

The unusual undercarriage is also very forgiving upon landing, both on land bases and aircraft carriers due to the wide track. However, this can also prove to be a hindrance for fans of the Simulator Battles game mode and pilots who prefer cockpit view, as the aircraft is indeed a "tail dragger". This causes an extremely restricted view on the ground and when landing, especially on a carrier.

Utilizing the Air Targets belt and adopting the pure fighter role in the Attacker is equally as effective thanks to the aircraft's good all-round performance, a "Bubble" canopy that offers good all-round visibility for simulator pilots as well as a set of air brakes situated in the wings to aid in slowing the aircraft and energy management.