The Fletcher-class was a class of 175 destroyers built by the United States during World War II.

Vehicles are listed in order of refit year, not build year

The Ariake-class destroyer is a class of destroyers of the JMSDF. Two ships of the Fletcher class were lent by the United States Navy and were in commission from 1959 until 1974.

Both ships USS Heywood L. Edwards (DD-663) & USS Richard P. Leary (DD-664) were commissioned in early 1944 coming from the Boston Navy Yard and saw active combat during the war. After Japan's unconditional surrender, they were assigned to the Pacific Reserve Fleet until 10 March 1959, when they were handed over to the Japanese in accordance to the Japan-US Ship Loan Agreement. 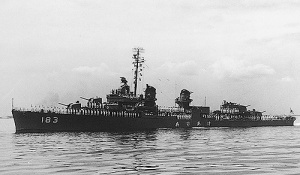 They would arrive at the Yokosuka Port on 16 April and on the 20th took part in their flag award ceremony into the JMSDF. Being commissioned as Japanese, Edwards would be renamed as lead-ship Ariake (ありあけ) and Leary renamed to Yūgure (ゆうぐれ) with pennant numbers DD-183 & 184. Directly after their commission, they would undergo reconstruction, removing all torpedo launch tubes, a trainee auditorium with a capacity of 40 people was included, and a part of the fuel tank was converted into a freshwater tank. This would allow the ships to be efficiently tasked as training ships.

Until 2 March 1970 they served their duty under the 2nd Training Corps which would be abolished, splitting the ships up leaving the Ariake to the Practical Experiment Corps where she would take part for hull and equipment experimentation whereas Yūgure would be tasked for mine warfare.

In 1974 both ships were stricken from the naval registry due to aging, and were returned to the US Navy at Yokosuka. They were sold there and dismantled in 1976.

The ships that were purchased were:

Ragged and outdated, nearing the end of their operational lifetime, they served in the Italian Navy for only just over five years. Lanciere in particular was used as spare parts and cannibalised for the other two destroyers which were later decommissioned in 1975.