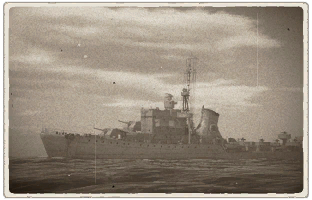 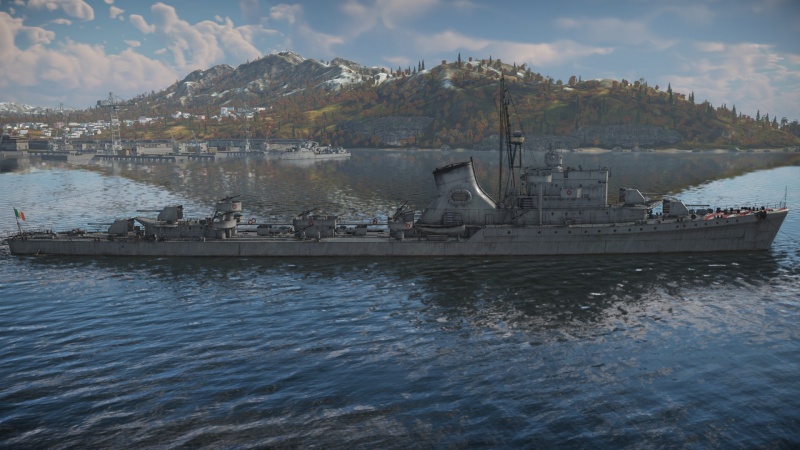 The Comandanti Medaglie d'Oro-class, RN Comandante Margottini, project is a rank II Italian destroyer with a battle rating of 4.0 (AB/RB/SB). It was introduced in Update "Raining Fire".

The Comandante Margottini is one of the Comandanti Medaglie d'Oro class of destroyers, the most modern Italian World War II destroyer design incorporating lessons learned by the Regia Marina during the war. She and the rest of her class were laid down but never completed, thus the Margottini is present in the game in her planned configuration. She features heavier main guns than previous Italian destroyers, much improved anti-aircraft armament, and even an air-search radar.

The Margottini has no armour whatsoever beyond the standard destroyer plating of 12 mm anti-fragmentation armour partially protecting her main gun mounts. However, she has a similar hull shape to the light cruiser Etna: a fairly large bow with a lot of empty space that can absorb AP shells or shrapnel from HE shells hitting the bow without too much damage to the ship. Her main gun ammunition magazines are also located below the waterline, and are thus hard to hit, especially at close range. The engine room is also located in the central part of the ship, slightly below sea level, which gives it a little protection.

However, she does have a fairly large unarmoured bridge, which means she is vulnerable to getting the helm disabled and losing crew from hits to the bridge. The main guns are also only partially protected by gun shields, and are thus also vulnerable to getting knocked out by nearby explosions and shrapnel.

The Margottini has a very large crew complement for a destroyer, at 277 men.

The Margottini has a respectable top speed of 65 km/h, driven by two turbines with a total power of 60,000 HP. The rudder shift time is just 5 seconds, which is very useful in combat situations to change trajectory quickly and effectively. The wide hull and shallow draft allow Margottini to remain very stable even during sharp turns. The Margottini can travel at 36 km/h in reverse.

The Margottini is armed with four 135/45 OTO Mod. 1938 main guns distributed in four single mounts, two in the bow and two in the stern. They fire heavier projectiles than the previous standard Italian destroyer weapon, the 120/50, but at a lower muzzle velocity. They also have a fairly low rate of fire of only 7.5 rounds/minute maximum with an aced crew. They do have greater elevation than previous Italian destroyer gun mounts, thus allowing some limited utility against aircraft.

The main guns can fire HE, HE-TF, and APHE. The HE has 1.8 kg of TNT, while the APHE has 1.4 kg of TNT. The HE-TF shell has the same amount of explosive as the HE but will detonate at the rangefinder's set range, thus allowing it to burst on air targets. In terms of ballistics, the HE, APHE, and HE-TF have a muzzle velocity of 825 m/s, which is slower than the shells of the 120/50 on the Dardo and Corazziere.

It is important to note that the stern-most turret (Y turret) has very poor traverse arcs because of the superstructure blocking it, requiring a large amount of broadside to be given in order to unmask the gun. The X turret ahead of it, in contrast, has full 360-degree traverse, and it can be brought into action very quickly.

This 37 mm cannon was built by Ernesto Breda as an automatic anti-aircraft weapon. The 37 mm/54 Breda cannon proved to be particularly effective at short-medium range and after several tests the Regia Marina decided to use them in twin installations (mod. 32) in 1934. On Comandante Margottini, 12 model 39 cannons were installed. The model 39 was the first of the two individually mounted models.

The 12 x 37 mm cannons are divided into two groups, four are arranged on the sides of the ship immediately behind the control room and the remaining eight are well distributed in the middle and rear of the ship.

The maximum range of the cannons is 5.3 km and the maximum effectiveness is 2.5 km and they are armed with tracer bullets, unfortunately not modifiable. These 12 cannons are very effective to ward off aircraft or to cause superficial damage to other destroyers. If there are small boats trying to get too close, the 37 mm will have no problem sinking them.

The Comandante Margottini is armed with six 533 mm torpedo tubes distributed in two triple tubes on the ship's centreline. These fire the late-war Si 270/533.4 x 7.2 Tipo M torpedo, which has a base range of 4 km at 93 km/h or 12 km at 56 km/h with the torpedo mode installed. The warhead is a respectable 270 kg of TNT.

The Margottini can also carry ten B TG 100 depth charges stored in the stern, each with 100 kg of TNT. These are located in depth charge racks on each side of the ship next to the upper stern main gun, and are rolled off the side of the ship into the water. They are potentially useful if an enemy ends up beside the ship for whatever reason, but it should also be noted that, if carried, the depth charges stored on the ship can detonate if hit by enemy fire, making them a potential hazard with very situational utility.

The Comandante Margottini is a destroyer with above average survivability thanks to her large size with a lot of empty space and large crew complement. It is best to have the front of the ship facing the enemy so that the large spacious bow can absorb as many hits as possible. However, one of the most vulnerable parts of the ship is the bridge: it is quite large and often the first to be hit in a firefight, especially when presenting the front towards the enemy. One way to reduce this is to zig-zag the ship or move just after firing or noticing the enemy has fired, taking advantage of the Margottini's good handling and acceleration.

Conversely, the firepower of the ship is rather underwhelming. With only four 135 mm guns and a slow rate of fire of only 7.5 rounds/minute at best, the Margottini will struggle to output as much damage as many destroyers at its battle rating. It is recommended to use primarily APHE shells as they have significantly more penetration and almost as much explosive filler as the fairly weak HE shell, although not all targets are suitable for the APHE, such as destroyers or ships with thin armour. Unfortunately, due to the low velocity of the projectiles, it is not recommended to engage enemies beyond 7 km as the 135 mm guns will not do much damage. The Margottini's torpedo armament is standard for Italian destroyers, forcing a choice between a range 4 km at 93 km/h without torpedo mode installed or 12 km at 56 km/h with torpedo mode installed. The former setting is potentially useful if the Margottini finds itself in a close range fight, while the latter setting is mostly useful as an area denial weapon.

The Margottini is, however, fairly unique among Italian destroyers in having a fairly strong anti-aircraft armament suite, consisting of numerous 37 mm and some 20 mm guns. She is also, along with the never completed Etna, the only Italian bluewater ship currently in the game with an air-search radar.

Beware of German ships and other ships with a high rate of fire such as the Fletcher, Akizuki, and SKR-7. With their high rate of fire, they can quickly decimate the crew even without causing major damage to the ship's components.

During World War II, the Regia Marina did not have enough destroyers available. By September 1940, 7 destroyers had been lost in combat, so a decision was initiated to build 7 new destroyers to replace them.

To save development and design time, a new batch of the existing Soldati-class destroyers were ordered.

These new Soldati-class destroyers got an additional 100 tons more in weight because of the new anti-aircraft and anti-submarine armament which was updated, the construction of the first units took place in October 1940 and 5 ships entered service between February and August 1942.

During World War II, the armament of the Soldati-class ships was modified several times and upgraded, eliminating a row of torpedo tubes and replacing them with anti-aircraft armament.

During 1941, while the second series of Soldati-class destroyers were being built, it became clear that more destroyers had to be built, in fact the Navy Ministry decided to incorporate all changes on destroyers, based on the experience gained in the war, so it was understood that a new class of destroyers had to be developed.

The committee assigned the task of designing the new class to General Carlo Sigismondi (Corpo del Genio Navale) who was assisted by Lieutenant Colonel Giuseppe Malagoli (Corpo del Genio Navale). The new class was practically an update of the Soldati class with the addition of more weight, the design of the ship changed in almost all parts except the layout of the engines which did not change, but the engines were upgraded to 60,000 horsepower.

The speed was reduced to 35 knots, a speed considered sufficient for all the missions that the new class of destroyers had to perform.

After these 8 units it was planned to produce a second series of this class of ship, the significant change of this new class was the replacement of the twin 120 mm/50 guns with single 135 mm/45 guns, then as anti-aircraft armament it was composed of 12 Breda mod.39 37 mm/54 cannons, the initial designs of the class when completed showed that the ship would normally be 2,600 tons of weight, 120 m in length, with a smokestack that was clearly inspired by the Soldati class.

During 1942, the project was again modified by eliminating the fifth gun positioned in the center of the ship to accommodate more anti-aircraft armament, in September 1942 the design was blocked in the same month orders were placed for 8 units of the second series (2 in Trigoso, 2 in Livorno and 4 in CRDA Trieste).

Later there was also a modification for the elimination of the stern director to favour the addition of more anti-aircraft armament.

Orders were placed for 8 units of the third series on 7 October 1942 with CRDA Trieste.

The name of the new class was called: Comandante Medaglie d'Oro. This name was chosen to remember the commanders who had received the gold medal (Medaglie d'Oro).

In the end, between May 1944 and January 1945, aerial bombardments were carried out on the shipyards where the ships were being built, as a result of the damage they were demolished.