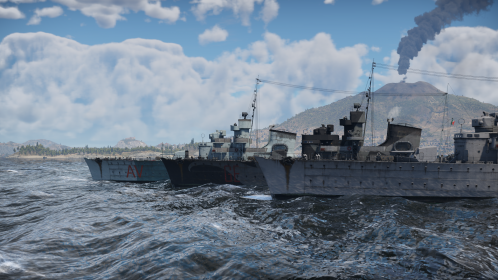 The Soldati-class were a group of 19 destroyers built for the Regia Marina.

Vehicles are listed in order of refit year, not build year

The Soldati-class destroyers brought to completion a series of attempts by the Regia Marina to build a type of destroyer that would be valid to operate together with battleships and cruisers in missions to counter adversary naval forces, and also to act jointly with the fast torpedo boats of the Spica-class in night torpedoing actions in the restricted waters of the Sicilian Channel.

The Regia Marina during the 1930s tried in various ways to create a more efficient class of destroyers than those already in service, and there were several attempts.

The first attempts were made in 1929 with the setting of the Freccia-class destroyers, which, although they were a step forward in comparison with the Turbine-class destroyers (especially from the point of view of autonomy and maneuverability) did not give the desired results, since they had to be made considerably heavier in the dead work to improve their lateral stability and seaworthiness.

In 1931 four Maestrale-class destroyers were set, which took the general characteristics of the Freccia-class, eliminated most of the defects of the previous class, resulting in a destroyer with satisfactory characteristics for the Regia Marina.

The most pronounced feature of these destroyers was their high speed, which, at trials, with light displacement, far exceeded 38 knots contracted to touch 41.3 knots with the RN Libeccio.

However, in practice, this speed proved to be entirely fictitious, as the Maestrale-class, with operating displacements on the 2,000-ton mark, failed to make more than 36 knots, and even in war, after the installation of new equipment and weapons, they did not exceed 32 knots.

Between 1935 and 1936, construction began on the 4 units of the Oriani-class, almost complete replicas of the Maestrale-class, but with greater installed power that enabled them not to register the marked decreases in speed of the previous class under practical operating conditions.

In 1937, the first 12 units of the Soldati-class were laid down, partly replicating the names of destroyers of 1905.

The first 12 units are Soldati-class 1°Serie.

All 1°Serie Soldier-class destroyers were delivered between June 1938 and the last Soldati-class of 1°Serie (RN Ascari) in May 1939. After the outbreak of the conflict, it was decided to build a second series of seven units, bringing the overall total to 19.

The last 7 units are Soldati-class 2°Serie

The RN Carrista was never launched, as she had to give up her stern to the RN Velite and her bow to the RN Carabiniere, both of which were torpedoed by British submarines. The RN Squadrista, on the other hand, was in the process of being outfitted when, after the armistice, it was captured by the Germans who towed it to Genoa, but still failed to complete it because it was sunk during an Allied air raid.

The remaining five units entered service between February and the last Soldati-class of 2°Serie (RN Velite) in August 1942.

The Soldati-class ships featured an extremely honed hull, and relatively uncluttered superstructures, to allow for the development of high speeds. The Schooner-type bow, characteristic of destroyers of the Freccia-class onward, was about 5.3 meters high on the waterline, and allowed good seakeeping from the forward sectors.

Immediately forward of the bridge deck was a 120/50 mm twin-barrel rig placed directly on the hull, and with a firing range of about 270 degrees.

The bridge was quite massive, and included: wheelhouse (with 9 protected hatches), command bridge, operations room and radio rooms, as well as various accommodations. Also on the wheelhouse sky was the large main firing station, and abaft this was a small telemetry tower also equipped with a large reflector for night firing.

Finally, on the overhead of the structure, on either side, were two platforms with twin 13.2 mm complexes for close AA firing, which contributed to the decidedly massive appearance of the whole, but allowed the ship's forward sectors, which were otherwise completely uncovered, to be beaten with anti-aircraft fire. On the other hand, however, one was obliged to keep some ammunition in an extremely delicate spot.

Aft of the funnel, on a deckhouse, were two platforms reaching to the edges of the hull, with two twin 20/65 mm complexes. Immediately below the step, were two motolances (one on each side) and two small boats.

In the middle of the ship, elevated about 70 cm from the hull, were placed two trinated torpedo-launching complexes with their uncovered launching units, separated from each other by a wide plank on which the single 120-mm cannon or illuminating howitzer, and a machine gun were placed. Finally, towards the stern, the last deckhouse with the second 120-mm twin rig, the partially covered emergency wheelhouse, and, forward of this, the aft mast.

On some units (RN Carabiniere, RN Ascari, RN Aviere, and RN Lanciere) a secondary gunnery unit was also arranged behind the 120 mm aft, but in the course of the war it was disembarked.

Internal compartmentalization and weight arrangement, following experience with the earlier types, had been particularly careful, so as to allow for good embedding and endurance qualities without having to resort to ballasting as had to be done with the Freccia-class.

The rudder, centrally placed between the two propellers and connected to the hull with a strong fin, together with the angular shape of the hull, contributed greatly to the overall good maneuverability of the ship.