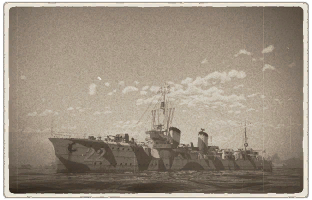 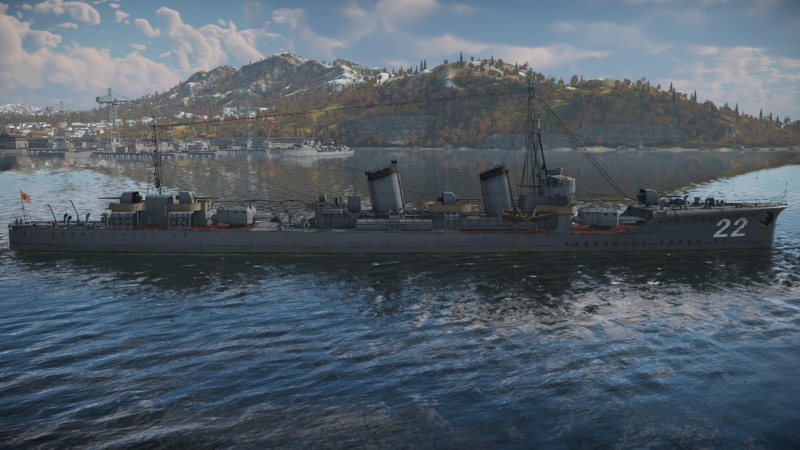 The Mutsuki-class, IJN Satsuki, 1935 (皐月, namesake: May) is a premium rank I Japanese destroyer with a battle rating of 3.3 (AB/RB/SB). It was introduced in Update "New Power".

Satsuki is a relatively well-armoured and survivable destroyer for its battle rating. Together with her sister ship, Mutsuki, this will be the first ship that's not prone to fires and the first one able to survive a single direct torpedo hit (unless it leads to secondary explosion).

The biggest issue in the ship's survivability is its lack of anti-aircraft armament. It's equipped only with two 7.7 mm auxiliary machine guns that are hardly useful even against wooden gunboats and nearly incapable of taking down anything airborne. Thus, the IJN Satsuki has to rely on a cover of other ships or time fuse 120 mm shells for protection.

With the speed of 62 km/h without any modifications, the IJN Satsuki is the fastest destroyer within its battle rating. Decent speed is supplemented by good manoeuvrability, making it capable of choosing engagements and occasionally even avoiding torpedoes other destroyers would not. The aced top speed is 69 km/h, which is easily enough to get around the battlefield. The rudder shift time is also very respectable, allowing for dodging patterns and making it a hard target to hit with torpedoes.

As Satsuki is premium, she will come with all the modifications unlocked.

Full broadside with all of of the Mutsuki's main guns, note the shockwaves coming from the end of barrel due to released pressure wave.
Main article: 120 mm/45 3rd Year Type (120 mm)

The IJN Satsuki is armed with four single 120 mm mounts, one in the bow, one just aft of the bridge in between the funnels, and two towards the aft. It's comparatively a powerful weaponry excelling especially at longer ranges against its equivalents.

Within its battle rating. IJN Satsuki has both the highest number of, and the highest calibre of primary guns. Its guns also have a second-highest muzzle velocity. That said though, it comes with a price - its shells are slow to reload, leading to the lowest sustained rate of fire among comparable destroyers. At the same time, damage output against warships is not as great as reload time might suggest, although still it's able to hullbreak almost any boat bar some unlucky hits at full-health units. Unfortunately for captains of the Mutsuki-class, the primary armament has a woeful turret traverse speed of 5°/sec (aced), making it difficult to switch targets and decreasing the overall versatility significantly. It would be very difficult to take the Mutsuki-class into more confined spaces as the turrets rotate far too slowly to deal with multiple torpedo boats or other craft.

Unlike most of the other nations, and typically to IJN rank III destroyers, it lacks armour-piercing shells for its primary armament what can be an issue when trying to deal with higher ranks. Alternative to standard HE is a researchable modification bringing in the Type 0 time fuse HE shells. Dedicated primarily for anti-aircraft duty, while very potent, the low number of fired shells and long reload time make for a hard choice and a very tricky way to protect itself from airborne attacks. 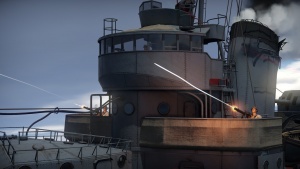 The secondary armament of the Mutsuki-class is two type 92 7.7 mm machine guns, each with 1,940 rounds of ammunition. The mountings are both abreast of the bridge, giving good all around coverage, but no overlapping arcs of fire except for the narrow frontal arc. They do virtually no damage and cannot be relied upon for defense against boats or aircraft. 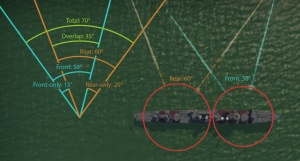 Graphic detailing port firing arcs for each of the launchers, with a total firing arc of 70° and an overlapping arc of 35°
Main articles: Type 90 (610 mm), Type 95 depth charge, Type 93 mod1 mine

The Mutsuki-class carries two triple centre mountings for 610 mm Type 90 torpedoes, along with 6 reload torpedoes in lockers alongside the rearmost funnel. This gives it the ability to reload mid-battle. Each torpedo has a 480 gram TNT equivalent warhead, and travels for 7 km at 85 km/h.

This gives it the best torpedo count, torpedo speed and damage at its rank and the second best range that can be upgraded to by far the longest range through the Torpedo Mode modification that adds 8,000 m for a total of 15 km range, making it capable of reaching opposing spawn area within nearly all maps played on the ship's battle rating.

Mutsuki-class's torpedo firing arcs are tricky to use. When switching between torpedo aiming modes, the first one to select is for the frontal mount, which not only has a narrower firing arc of the two, but its available firing arc is oriented towards the rear of the ship. This creates a situation where most of the unknowing players would only use a very narrow 35° arc, where the first launcher begins to be able to release torpedoes after coming about. Therefore, when manoeuvring bow-first towards the enemy, it's recommended to switch to the rear launcher first; when manoeuvring stern-first towards the enemy, it's recommended to use front launcher first.

The IJN Satsuki has an unlockable modification to equip Type 95 depth charges mounted on the Bomb Mortar. It's the only one of two destroyers within its battle rating to be equipped with that modification, making it a fairly unique ship equipment. The Mutsuki-class comes equipped with two mortars: port and starboard, each having one charge loaded and up to 3 spare. Charges cannot be loaded interchangeably, therefore only 4 are available to launch port and 4 starboard. Charges after ejection will be dropped at a constant distance away from the ship, player has only control over which side should charges be ejected on. Depth charges cannot be equipped onboard Mutsuki-class without the bomb mortar, it's the only way they can be deployed.

The Mutsuki-class is one of the more challenging destroyers in the game, forcing player to rely on positioning, primary weaponry and other teammates.

Her combination of a good survivability with speed and a long-range cannons make for a respectable fighter at range, however an extremely lacking secondaries create a huge opportunities for hostile torpedo boats or aircraft. IJN Satsuki in essence is forced to rely on friendlies, being best used in formation assisting other ships, using the cover of their anti-aircraft and trying to always keep hostiles at over 2.5 km, away from the range of their auxiliary guns firing back.

While maps the IJN Satsuki will fight on include small, narrow passages, those should be avoided for the fear of enemy boats - lack of secondary armament combined with slow, cruiser-like reload time on a primary cannons make for a very challenging task to destroy hostile torpedo boats, and being a destroyer: it has overall a poor manoeuvrability and a large size compared to many opponents it will face, making for a juicy target.

Overall, IJN Satsuki has a very steep learning curve, where player simultaneously has to master positioning in warships, leads on various targets at various ranges and a long-range torpedo gameplay.

The clock clearly visible on a rear mast of the Satsuki and certain other destroyers is in fact a Range Dial (also known as Concentration Dial).