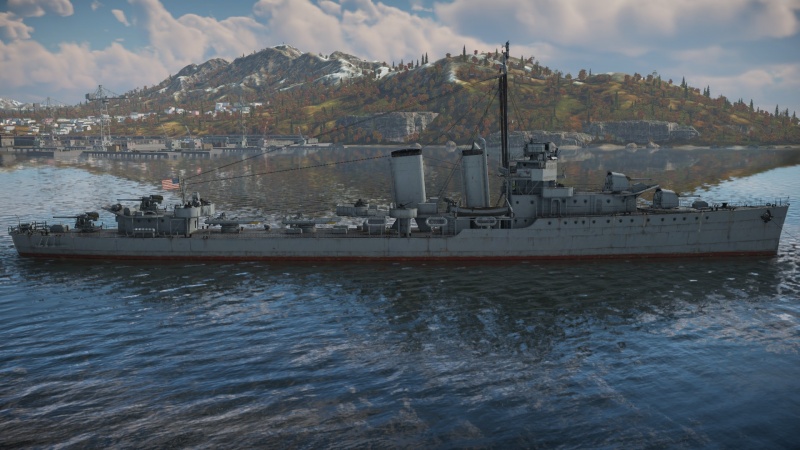 USS Aylwin has a total of 4 x single 5"/38 Mark 12 guns arranged in a balanced manner. These guns are rapid firing compared to earlier destroyers (13 rounds/minute) and have a very quick rate of traverse (25 degrees/second). However, due to low muzzle velocity, it can be difficult to aim at distant targets. Past around 7,000 m the shells will take over 10 seconds to land and tracking shell splashes will be challenging.

Like the other American 5"/38 Mark 12 guns, the Aylwin has the AAC Mark 34 HE shell as stock. The Common Mark 32 SAP and the AAVT Mark 31 HE-VT shells are available as upgrades. Making good use of the VT shell will mean that hostile aircraft stand little chance against you. HE shells will make quick work of light craft such as torpedo boats and sub chasers. HE can also be used against destroyers as they lack armour, while SAP can be used against cruisers with armour protection. Just be aware that at longer ranges and at significant angles, the SAP will be ineffective against armour plating.

Aylwin has access to 8 x 20 mm Oerlikon cannons for her anti-aircraft defences. 2 of them are just forward of the bridge, four of them are just behind the smoke funnels, and the last 2 are just in front of the after main battery mounts. These provide a wide range of fire and can make short work of aircraft that stray too close. They can be effective against hostile torpedo boats, but if these are firing at surface targets, it is highly likely that you will have torpedoes headed your way.

The torpedo armament on Aylwin is less than the preceding Clemson (DD-213) but it is more versatile as both of the quadruple 21" (533 mm) launchers are mounted on the centreline amidships. Due to the tight spaces on-board the ship, you do have to give significant broadside to fire the torpedoes, so be aware of your surroundings.

The Aylwin uses the Mk.15 steam turbine torpedo with a default setting of 5,500 m at 45 knots. This can be modified to an extended range of 9,150 m at a reduced speed of 33.5 knots. Each torpedo has a warhead of 224 kg TNT which can make short work of an enemy destroyer providing the hit is not on an extremity. Cruisers may take more than one, but even a single torpedo can be devastating to a larger ship.

Upon unlocking the "Bomb mortar" upgrade, you can equip 4 x Mk.6 depth charges which are projected from mortars. These are positioned near the aft end of the ship, right in line with the No.3 turret. These weapons have an extremely limited range (only a few hundred metres off each side of the ship) and would only be used during a close-in brawl. Keep in mind that the depth charges do take a few seconds to fly through the air and sink before they detonate, so be aware of timing their firing.

Each Mk.6 depth charge has an explosive charge of 136 kg TNT, which will obliterate any small craft and deal significant damage to a larger ship.

The first US destroyer with five-inch guns, Aylwin is a major upgrade from the Clemsons, boasting one of the best DPMs at her tier. Unfortunately, this comes at the price of a small broadside and a non-existent armour profile. Thus, Aylwin has two roles, depending on game time and preference:

Due to her powerful cannons, Aylwin can decimate ships at medium to close range. Unfortunately, due to her guns having somewhat poor velocity, at ranges exceeding 6,000 km, Aylwin's guns become harder to land shots with. At shorter ranges, her lack of anti-fragmentation armour punishes you for getting caught in enemy cross fire, as retreating can take some time. Hence, at a medium ranges, Aylwin should use her high rate of fire, and powerful guns to lock down cap zones, and support more protected destroyers such as Fletchers as they push up. This does not mean that Aylwin cannot cap, but does mean that one must be very mindful of enemy destroyers when using Aylwin, as not getting hit is a vital for this vessel.

Especially good when up-tiered or when being used as a second or third spawn, Aylwin's decent(ish) anti-air defence of eight 20 mm cannons is actual quite potent. Though low calibre, their ability to fire almost constantly as well their decent placement makes fighting Aylwin in an aircraft very risky. Naturally this AA is only good at short range, so one must always look out for air dropped torpedoes and low flying bombers, but it can still deter and often destroy even the most potent of attackers. In addition, Aylwin's main battery has a proximity-fused shell that can be researched. As it is radio controlled, it will always burst very near to where your gun distance is set, allowing you to use your high fire rate to tear down aircraft at longer ranges. This firepower can also help deal with short range gun and torpedo boats. As many players tend to bring these light craft in around the end game, when capping gets more fierce and most first spawns are destroyed, sailing into a contested area and letting your 20 mm cannons fire is still a feasible idea. Unfortunately, Aylwin is quite vulnerable to frigates, which the Germans, Japanese and especially Soviets have a lot of, so use your main guns and keep these close range monsters as far away as possible.