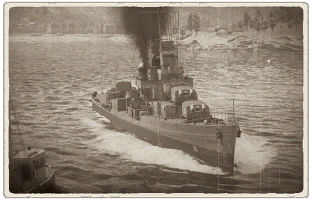 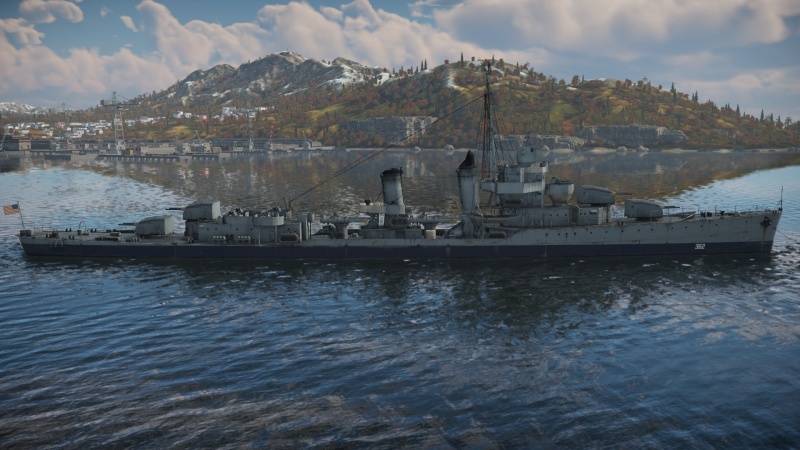 Moffett is equipped with anti-fragmentation armour, but this only helps against HE and is useless against shells from most cruisers. That being said, given its reasonable crew size (for a destroyer) and anti-frag protection, Moffett can serve as a destroyer leader and (briefly) tank shells whilst the rest of its team follows up behind. Moffett's turrets are somewhat protected from HMG and autocannon fire but are also large and prone to being disabled by dedicated artillery pieces above 76 mm, though you do have eight of them. The ship also has a row of torpedo tubes which can act as an easy ammo rack to detonate if torpedoes are loaded.

The ability to steam above 60 km/h makes Moffett a swift vessel, at the cost of some turning time.

The USS Moffett is equipped with 8 x 5 inch/38 (127 mm) SP gun mounts. All are built in a dual mount setup, allowing for more guns on target than single mounts. When using her first stage ammo storage, she can fire at a very fast 22 rounds per minute, decreasing to 15 rpm once the first stage storage is empty. This rate of fire is among the highest of any destroyer's main gun of any nation, and even the second stage ammunition reload is competitive. Each first stage ready rack can hold up to 40 rounds in total.

The turret traverse speed is 15 degrees per second, and gun elevation speed is 12 degrees per second. Both forward and rear turret groups have a 150-degree turning radius and can elevate 35 degrees and depress a total of 10 degrees. The range of fire and traverse speed for the turrets on the Moffett is not exceptional, but the high number of guns ensures that a fair amount of firepower is available in any direction. That being said, the level of AA that these guns can provide is limited by the elevation of 35 degrees; planes directly above the Moffett cannot be targeted.

The 5"/38 guns on the Moffett have access to a range of shell options, including HE, Common, SP Common, and HE-VT. These munitions are competent, being on par with foreign 127 mm guns. The HE and HE-VT shells have 3.2 kg of TNT filler and are excellent at disabling destroyer turrets and armament. The very high rate of fire allows for rapid retargeting once a module has been disabled, further contributing to the incapacitating power of the 5"/38. Because HE provides no advantage over the HE-VT, it is recommended to choose HE-VT over HE. Although HE is quite good at targeting ship exteriors, the Common shell type will provide much more internal damage and is much better at sinking ships quickly. There is a tradeoff between Common and SP Common, with Common having more filler but less penetrative power, and vice versa for the SP Common. While both shells will work, the Common shell will deal more damage as there is a lack of armour at the BR that the Moffett sits at.

The Moffett has only two 1.1 inch/75 Mk.1 "Chicago Piano" AA guns. They are slow to traverse and slow to fire, and as such the passive AA capacity of these guns are very low. Still, they do serve as a deterrent and are capable of destroying PT boats if the main armament is disabled.

Instead of using the M2 Browning MG like its tech tree counterpart USS Porter, the Moffett features five Oerlikon autocannons, which is a beefy upgrade compared to the Porter. Along with Chicago Piano secondary, the Moffett has a competent level of AA, and can take down planes with an average level of consistency.

Moffett is equipped with 8 x 21 inch (533 mm) torpedo tubes, positioned into twin mounts, one placed just behind the rear smokestack and the other between the two smokestacks. While it is not the most powerful in-game torpedo, it can still do its job well.

Similarly to her sister ship USS Porter, the Moffett excels at hunting other destroyers with its eight 127 mm guns and anti-fragmentation armour. The high number of guns and great quality of the main armament allows the Moffett to gun down nearly any other destroyer faster than some early light cruisers. Even at its relatively high BR for a destroyer, the Moffett is capable of maintaining a damage output that is competitive, if not top of the class, at a BR where cruisers begin to enter the fray.

In the right hands, the USS Moffett is even capable of destroying light and heavy cruisers with relative ease. 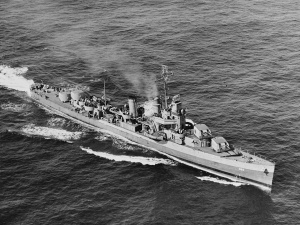 USS Moffett was the fourth destroyer of the Porter-class to be commissioned and the third to be launched. She was an inter-war destroyer design built for the US Navy. Commissioned in late 1936, the Moffett was immediately put to service as a peacekeeper in the South American theatre. She escorted President Franklin D. Roosevelt to the Atlantic Charter Conference with Winston Churchill and saw active service as a convoy escort in the Atlantic theatre. During her time as a submarine escort, she contributed to the sinking of two U-boats. Moffett was decommissioned after the end of the war and scrapped in 1947.[1][2]

The Moffett was a member of the Porter class, a class of eight American destroyers intended to replace the preceding Farragut-class. Despite being initially designed in 1916, the ships were not built until the early 1930s. Intended to fit within the 1,850-ton displacement limit of the London Naval Treaty, Moffett ended up displacing almost 2,700 tons full as the design was improved.[1] She was 116 metres long, and with 50,000 shaft horsepower, could make 37 knots (69 km/h).[1] Her main armament consisted of eight 5-inch (127 mm) single-purpose guns in four double mounts.[1] She also carried various anti-aircraft defences and eight torpedo tubes in two quadruple mounts.

Moffett was laid down in 1934 by the Bethlehem Steel Shipyard and was launched in December of 1935.[1] After being completed, she was formally commissioned on August 28th, 1936.[1]

After her commissioning, the Moffett was immediately put to use in peacekeeping operations. She sailed as part of the Southern Atlantic Neutrality Patrol in 1941, which was responsible for maintaining peace off Brazil's coast. During this time, she also escorted President Franklin D. Roosevelt to his conference with British Prime Minister Winston Churchill in Labrador, Canada.[2]

Following the American entry into World War II, Moffett served as a convoy escort in the Atlantic ocean.[2] It was during this time that she achieved her first submarine kill; this occurred when the Moffett sighted a U-boat that had been previously attacked by allied PBM Mariners. Along with the destroyer USS Jouett (DD-396), she successfully sank the submarine using gunfire.[2] Just three months later, Moffett was escorting another allied convoy when she encountered another submarine, U-604. Following a chase that lasted an entire week, the Moffett managed to severely damage the submarine using depth charges, which led to its scuttling.[2]

Moffett spent the remainder of the war as a convoy escort, defending allied convoys travelling from the Caribbean to Europe. She returned to the US in 1945 to receive a refit, but the war ended while she was still in the drydock. As a result, Moffett was decommissioned and scrapped in 1947.[1][2] She received two stars for her service during the war.