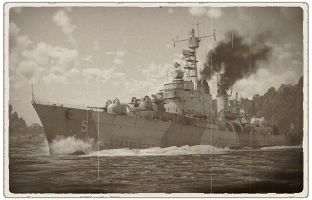 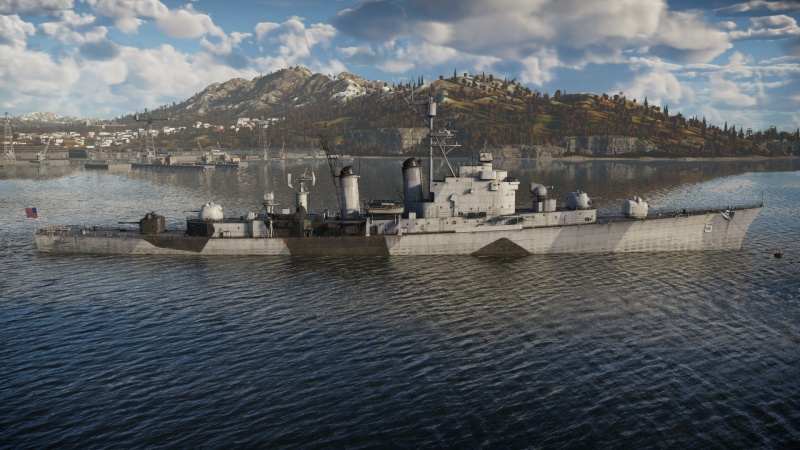 The Mitscher-class, USS Wilkinson (DL-5), 1958 is a premium rank II American destroyer with a battle rating of 4.7 (AB/RB/SB). It was introduced in Update "Winged Lions".

A sister ship of USS Mitscher, USS Wilkinson has more modern 76 mm guns with double the rate of fire, no 20 mm cannons, and a larger crew. It is otherwise identical to its sister. As a destroyer leader, it is a massive ship, rivalling some cruisers, but not having anywhere near the firepower, with only 2 fast-firing 127 mm guns and 2 automatic dual 76 mm cannons. The large size makes it harder to hide behind small islands, and is easier for enemy ships to hit. The firepower may seem underwhelming, having a total of only 2 main guns, but their high rate of fire allows for continuous fire, allowing an accurate player to disable enemy ships before they can reload.

The Wilkinson also benefits from Cold War-era electronics in the form of an anti-aircraft radar and very fast fire control adjustment. The radar allows the Wilkinson to maximise the AA power of the dual-purpose automatic 127 mm cannons, which can compensate for the otherwise very low number of anti-aircraft mounts on the vessel. The fire control assists fighting surface combatants, with a low computation time of 8 seconds and 4 seconds to update. This will allow the Wilkinson to better aim at longer distances, and provides a valuable tool for newer players.

As a Cold War "Destroyer Leader", the Wilkinson is significantly larger than other destroyers, and additionally has a very high crew count, even higher than the tech tree equivalent of the USS Mitscher; it's more fair to compare the Wilkinson with early light cruisers than it is to compare with conventional destroyers in terms of pure size and crew count.

However, the large crew and spacious design of the Wilkinson uniquely affects interaction with torpedoes; typically a single torpedo will not instantly destroy the Wilkinson, and may not necessarily cause complete incapacitation either. When facing a torpedo salvo, if it is impossible to completely dodge the torpedoes, it is recommended to only let the torpedoes hit the very front or very end of the ship to minimise internal damage. This will only result in flooding, a much smaller issue than instant destruction or complete incapacitation.

The mobility of the Wilkinson is sufficient, with a respectable top speed, but has somewhat limited manoeuvrability compared to other destroyers due to the Wilkinson's large size. Dodging incoming fire and torpedoes will be difficult for the Wilkinson, but this is somewhat offset by the high crew count of the ship.

The Wilkinson is armed with two single-mount 127 mm/54 Mark 18 cannons, positioned with one turret at the front of the ship, and one at the back of the ship. While the number of guns on the Wilkinson is significantly limited, the performance and damage output of these cannons compensates for the low number of guns; these cannons have a number of advantages over other destroyer-calibre guns. These guns have an exceedingly high fire rate, at 40 shells per minute. This is nearly twice as much as an American 5"/38 gun, for comparison.

The turrets are fully traversable over 360 degrees and have a high maximum elevation of 85 degrees, allowing for efficient targeting of surface vessels as well as good tracking of air targets as well. However, the 127 mm/54 cannons do not have particularly good ballistics nor accuracy, so precise aiming and long range sniping is somewhat difficult despite the excellent traverse and fire rate of the guns.

These cannons have a shell choice of HE, SP Common, and HE-VT shells. Individually, these munitions are heavier than other 127 mm guns and pack a bigger punch. The SP Common is the most notable shell type available, possessing both an adequate explosive filler of 970 g and a stellar penetration of 206 mm at 1,000 m. Also worth mentioning is the HE-VT shell, which has very good explosive filler and works very nicely with the rest of the Wilkinson's kit, including the high fire rate of the guns, the superb targeting angles of the turrets, and the anti-air radar.

The secondary armament of the Wilkinson consists of two twin-mounted 3"/70 Mark 37 cannons. These guns are fully automatic and do not overheat nor require a burst reload; they will fire at an astounding 100 shells per minute until the ready-rack of 144 shells is depleted. Additionally, the dispersion and accuracy of these cannons is quite good when player-controlled. Performance against air targets and costal vessels is sublime, with the 3"/70 guns excelling at destroying light and fast targets. The secondary armament can also be used quite well to disable external components of destroyers, although these cannons lack armour penetrating ammunition and therefore cannot damage destroyer internals.

The shell choice on the 3"/70 guns is straightforward, with a potential choice between HE and HE-VT shells. Both shells have the same explosive filler of 480 g of TNT, so these isn't any disadvantage for only choosing HE-VT over HE. Compared to similar post-WW2 76 mm cannons, these shells have relatively poor filler, with stiff competition with the 668 g of the OTO-Melara and 739 g of the AK-726, but are still more than sufficient at their role.

The Wilkinson can be equipped with four 533 mm Mark 35 torpedoes in fixed mounts. These torpedoes are not powerful compared to contemporary torpedoes, nor are they particularly fast, but still retain sufficient explosive power at the Wilkinson's battle rating. The primary limiting factor for these torpedoes are the fixed firing mounts, which means these torpedoes cannot be used with the same level of utility as on other destroyers.

In addition, the Wilkinson has access to two 320 mm Alfa antisubmarine rocket launchers. These rockets are very powerful, with an explosive mass of 113kg of TNT, but are heavily limited by a range of 600 m. These mounts have very exposed ammunition storages which deal a significant amount of damage to the Wilkinson when detonated. However, the relatively high crew count and large size of the Wilkinson means that the damage inflicted by a detonation of these rockets will not critically damage or wholely incapacitate the ship. Overall, the Alfa antisubmarine rockets are not recommended in general, but can be taken in some close-range maps.

The Wilkinson can be a very capable vessel, if its strengths are capitalised on. The high crew count and rapid-firing main armament lends itself to a close-ranged brawler playstyle. At close distance, the poor accuracy of the main guns is negated and the high fire rate can be used to efficiently disable or destroy enemy vessels. A prime strategy is to target the ammunition storages of destroyers and cruisers at mid- to close-range, which can be easily detonated thanks to the substantial penetration and explosive filler of the 5" main guns.