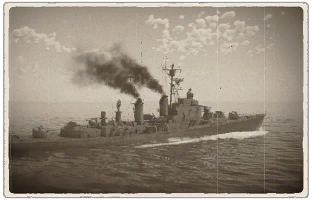 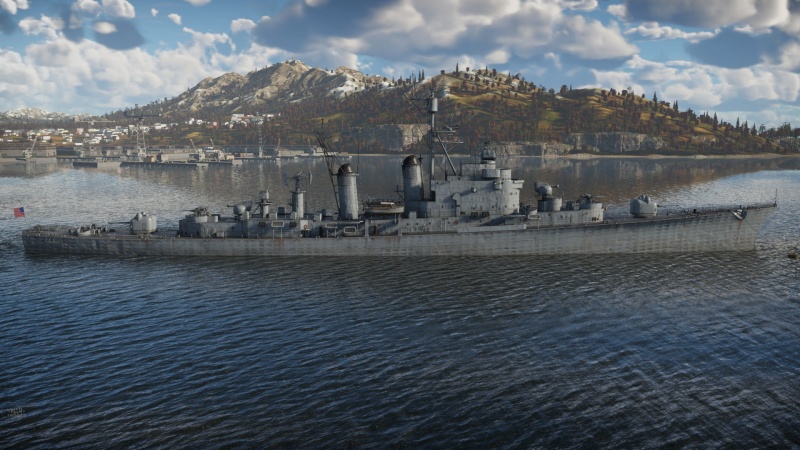 The Mitscher-class, USS Mitscher (DL-2), 1954 is a rank II American destroyer with a battle rating of 4.7 (AB/RB/SB). It was introduced in Update "Ground Breaking".

Built during the early Cold War to serve as a "Destroyer leader" to be armed with various armaments for different targets, the Mitscher is unusually large. At a whopping 150 m in length and over 4,800 tons of displacement, she even dwarfs the Japanese experimental cruiser Yubari and has a size closer to that of light cruisers.

The Mitscher is barely armoured. The ship only has thin armour to protect the two cannon turrets and a gun shield for Oerlikon autocannons, the ship will attract incoming fire from all gun calibres and take full damage. Her internal modules are unprotected and can be easily damaged, especially her rocket ammo racks that can be easily detonated due to lack of protection.

Being a destroyer, the Mitscher is reasonably fast and manoeuvrable, though her large displacement for her class and long length limit her acceleration and agility.

The main armament for the Mitscher is two 127 mm/54 Mark 18 autocannons mounted in a single turret at the bow and stern. The main turrets can be fully traversed over 360 degrees and consequently have very good coverage. While there are only two main guns for the ship, which severely limits its burst damage, and has notably worse accuracy compared with other 127 mm guns, these weaknesses are compensated by an extremely fast rate of fire of 40 shells per minute, and thus allows the Mischer to deal a similar continuous damage output as other destroyers at her BR range. Moreover, the shells fired by the Mitscher are heavier and more powerful than WW2-era 127 mm shells in terms of both penetration and explosive filler.

The Mitscher has three type of shells; an HE shell with similar damage output to other American destroyers, an SAP shell with very good penetration of 156 mm at 5,000 m that is capable of damaging enemy cruisers, and an HE-VT shell that is very useful for engaging aircraft thanks to the gun's wide coverage and fast reload, especially when used with the anti-air radar that the Mitscher is equipped with.

The Mitscher can be equipped with four 533 mm Mark 35 torpedoes in fixed mounts. These torpedoes are not powerful compared to contemporary torpedoes, nor are they particularly fast, but still retain sufficient explosive power at the Mitscher's battle rating. The primary limiting factor for these torpedoes are the fixed firing mounts, which means these torpedoes cannot be used with the same level of utility as on other destroyers.

The Mitscher also has access to two 320 mm Alfa antisubmarine rocket launchers. These rockets are very powerful, with an explosive mass of 113 kg of TNT, but are heavily limited by a range of 600 m. These mounts have very exposed ammunition storages, which deal a significant amount of damage to the Mitscher when detonated. However, the relatively high crew count and large size of the Mitscher means that the damage inflicted by a detonation of these rockets will not critically damage or wholly incapacitate the ship. Overall, the Alfa antisubmarine rockets are not recommended in general, but can be taken in some close-range maps.