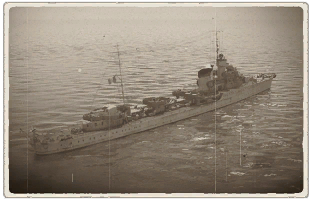 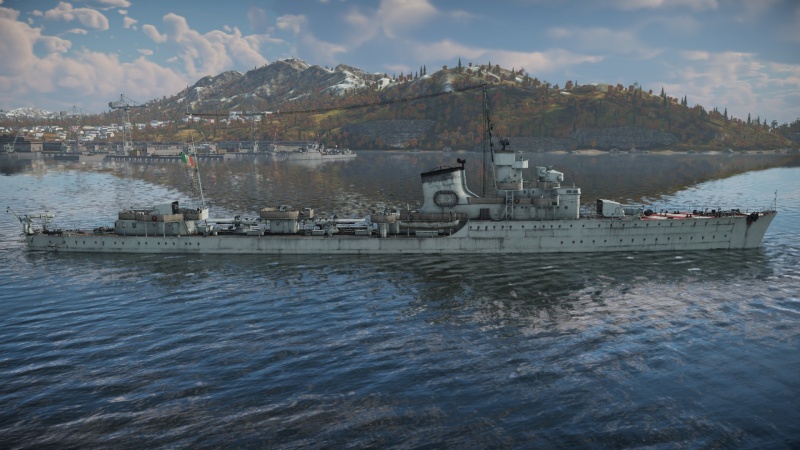 The Soldati-class, RN Aviere, 1940 is a premium gift rank III Italian destroyer with a battle rating of 4.0 (AB/RB/SB). It was introduced during Update "Red Skies" as a reward for the 2021 Summer Landing event.

All the soldati-class have the same armour the only thing that difference them are armament or crew.

The RN aviere has no armour whatsoever other than 12 mm anti-fragmentation shields protecting the main gun mounts. These mounts are, however, open-backed, and can be disabled by nearby explosions if they land behind the gun shield. There are also some large fuel tanks providing some degree of protection to the transmission and the stern and amidships main gun magazines.

The RN Aviere has a massive unarmoured bridge that takes up almost the entirety of the forward superstructure, which makes her very vulnerable to getting the bridge disabled.

The RN Aviere has a crew of 187 men, compared to the other Soldati-class it has much less crew so it cannot sustain as much damage as RN Geniere and RN Corazziere which have crews of 215 men.

In both AB and RB modes, the RN Aviere has a very good acceleration both forwards and backwards from a standstill, this gives you a better chance to dodge torpedoes or enemy salvoes.

The RN Aviere has four twin 20/65 Breda Mod. 1935 cannon, two on each side of the ship. These are decent at short and medium range anti-aircraft weapons.

Because of the railings surrounding these weapons, they cannot depress enough to engage surface targets closer than ~1.1 km and have a slow rate of fire, making them useless against coastal boat.

The torpedoes are placed in the center of the ship can only be launched when pointing left or right, due to the torpedo mode modification the torpedo range can be increased but the speed is reduced.

Depth charges, on the other hand, are placed in launchers one on the left and one on the right, you have to use them in a certain way because they are not dropped into the water but are launched for a few tens of meters.

Instead of having 5 120mm cannons it only has 4 which allow it to damage or destroy other destroyers with one shot, APHE are perfect against destroyers and light cruisers while the heavy ones need enough shots to do serious damage to them, HE are perfect against small targets or firing on the decks of enemy ships so you can disable the ship's control, while torpedoes are the ship's main piece of equipment and cause serious damage to enemy ships or complete destruction.

Reduced crew is a disadvantage for RN Aviere, which means you cannot be in prolonged combat against other ships.

In Battle RN Aviere must be used with cover (an island, rock, etc.), thanks to your acceleration you can get out of cover and fire a few shots then return behind cover so you avoid enemy damage, if you find open maps without cover you will be an easy target so move away and fire at a distance dodging incoming enemy shots.

She was assigned to the 11th Squadriglia di cacciatorpediniere, then to the 3rd, 1st, 5th, 8th Divisions successively.

In the pre-war period (before 1939) he carried out training activities.

In 1939, he was in Naples for the Naval Review organised in Naples on the occasion of Prince Paul of Yugoslavia's visit to Italy, and cruised with the Squadron in North Africa and the Dodecanese.

During the Second World War, he carried out intense activity, completing 145 missions of which, 41 escorting, 16 searching for the enemy and ultimately covering 58,000 Miles (93341.952 Km)

In 1940 she participated in the Battle of Punta Stilo (on 9 July 1940), firing squadron torpedoes against enemy larger ships, after 12 October while she was with the 11th Squadron and 1st Torpedo Squadron she participated in an attack east of Malta against the cruiser Aiax, but before it could open fire it was hit by 152mm cannons, which immobilized it and it lost 8 men after this fact The unit returned to Augusta escorted by RN Geniere in turn was taken to La Spezia to carry out work until 10 December.

In 1941 RN Aviere participated in the 1st Battle of Sirte.

On 17 December 1942, north of Biserta, while on an escort mission with the RN Black Shirt, the German ship Ankara was hit by two torpedoes from an enemy submarine, causing the rapid sinking of the ship.

In 1936, the Royal Italian Navy initialized development of a new class of destroyers, based on the previous Oriani class designs. New ships were supposed to install improved main battery guns and a reinforced anti-aircraft gun battery. Soldati class destroyers were produced in two large batches (series). One of the ships of the first production series was the destroyer Aviere (Italian "pilot"), which was completed in 1937 and became part of the 11th destroyer battalion. She received her baptism of fire in the Battle of Calabria, where she made a torpedo attack against the British fleet. In the battle at Cape Passero in October 1940, she attacked the cruiser HMS Ajax, she received serious damage from the enemy fire and went to the port of Augusta for repairs. After repair was completed, she continued combat service in the Mediterranean. In December 1942, during an escort mission en route from Naples to Bizerte, she was attacked by a British submarine P-228. The destroyer was hit by two torpedoes, followed by the detonation of the ammo stowages, after which she sank. Of the 230 crew members, only 30 were saved.