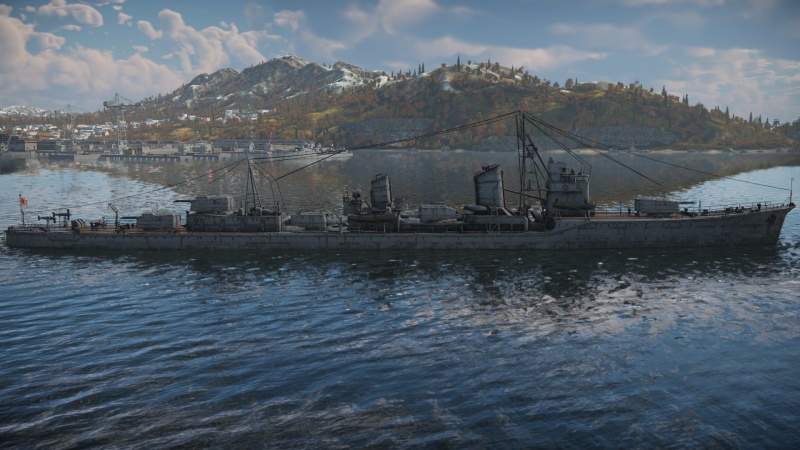 The Yugumo-class, IJN Yugumo, 1942 (夕雲, namesake: Evening Clouds) is a rank II Japanese destroyer with a battle rating of 4.3 (AB/RB/SB). It was introduced in Update 1.89 "Imperial Navy". This is a last torpedo focused boat, before player gets introduced into the gunboat-style of the Akizuki destroyer.

Fully-spaded IJN Yugumo is both: fast and manoeuvrable, allowing it to quickly face the enemy for an optimal torpedo deployment

IJN Yugumo upgrades over IJN Ayanami in survivability, primarily due to its lower profile, but also higher crew count. Notably Yugumo has a much lower freeboard, lower forecastle and much smaller smoke funnels. This in effect gives it a better chance of avoiding enemy fire, especially at the long range, even though overall it is a longer ship. Additionally its survivability further is aided by having ammunition stored deep underneath the water line, what ensures survival if faced with AP shells, and having torpedo turrets protected against fragmentation damage, though they are still one of the easiest components to damage on the ship.

That said though, comparing to the equivalents in its BR, the ship has a relatively low crew count, sailing just a 2/3 of the Leningrad men, in a short-range fights Yugumo has to rely on its overwhelming firepower to take down the enemy before suffering overwhelming causalities itself.

Stock Yugumo has a maximum speed of 58 km/h, which upgrades to 79 km/s with all the seakeeping modifications. Overall its relatively comparable with equivalents in other nations, if not slightly slower, though the differences are within 5% range between most of the destroyers in the same BR. Maximum reverse speed is -23 km/s stock and -31 km/h spaded.

As always, the highest priority in modification research should be put on Tool Set and FPE. Beyond that primary focus should be on Unsinkability part of the tree, possibly with an addition of Rudder Replacement. Note that Targeting upgrades are not mandatory, as guns can keep up with a turning rate of even a fully upgraded Seakeeping. Finally, as with all of the destroyers, Bomb mortar is the least important upgrade of the bunch.

Yugumo's primary guns are shared with Ayanami, offering the same capabilities and the same shell choice. Despite of being in a higher BR the ship stands a fair chance against its counterparts, though with increasingly challenging opponents and added care has to be put in an accurate gunnery and torpedoes play an even more important role in disposing opponents.

The Yugumo is equipped with two twin mountings of the 25 mm Type 96 autocannon. Its setup clearly plays a primary role as an anti-aircraft weaponry, having turrets located to provide optimal AA coverage, however they are classified as an auxiliary armament and will use those crew skills instead of anti-aircraft. The high-explosive type rounds this gun fires will have no trouble knocking out any airplane it hits. AP type rounds are also available and can be used against small torpedo boats that want to sneak. Each twin mounting is placed on side of the ship which mean they can't shoot at the same target unless its aircraft.

Unlike its predecessors, Yugumo uses a new, Type 93 Model 1, Mod 2 torpedoes. Those are much more powerful, having over 30% more explosive power, which enables it to sink nearly any destroyer with a single hit. To compare with equivalents of other nations, Yugumo's torpedoes have an equivalent of 627.2 kg TNT, while German G7a has 358.4 kg, British Mk.IX has 340 kg or US Mk.15 has 224 kg, all also having much lower range and slower speed. It's one of the best torpedoes available, bested only by Type 93 Model 3 or more modern anti-ship torpedoes, such as Mk.16.

Yugumo has a tier IV modification available that unlocks the Bomb Mortar, allowing it to equip 8 Type 95 depth charges. All are stored above deck and ejected pneumatically to either port or starbord, up to four on each side.

Depth charges currently have an extremely limited use, having no submarines in the game and being limited to a combination of a static position where they were dropped at, and a specific time at which enemy has to arrive in order to risk any damage from the charge. Realistically it should be the last modification researched on the ship, as it provides no palatable benefit during the gameplay.

IJN Yugumo is one of the most formidable destroyers, owning it largely to its outstanding torpedo armament, but also otherwise well-rounded mix of survivability, mobility and the firepower. Due to lack of AP rounds and a relatively low crew complement Cruisers are its absolute bane, being able to knock it out with a single lucky salvo, while themselves not having to worry much about anything but torpedoes. Like all torpedo-centric destroyers Yugumo excels in Arcade Battles with an ability to re-spawn torpedoes mid-battle, while having much tougher time in Realistic Battles.

Main article: History of the Yūgumo-class

IJN Yugumo (夕雲, Yūgumo, literally: Evening Clouds) was the lead ship of her class (夕雲型駆逐艦, Yūgumo-gata kuchikukan, also called Third class) laid down on June 1940 at the Maizuru Naval Arsenal (located in the Kyoto Prefecture), launched on 16 March 1941 and completed on 5 December 1941.

Soon after commissioning on 18 April 1942 she took part in an intercept in an attempt to engage the U.S. fleet group which launched the Doolittle Raid, however, all attempts to locate any of the hostile ships failed. In June 1942 Yūgumo took part in the Battle of Midway as a principle defender to the aircraft carrier Hiryū, and later on, took part in rescuing a number of survivors from the battle (although not from the Hiryū herself). In August she took a part in the battle of the Eastern Solomons as the screen for the Fleet Carriers Shōkaku and Zuikaku, and two months later in the battle of the Santa Cruz Islands as a part of the Vanguard group lead by the battleships Hiei and Kirishima. After the battle, she took part as the rat transport (or as it was nicknamed by US forces: Tokyo Express) moving supplies and troops into the Guadalcanal Island while brining back wounded soldiers. It continued till Operation Ke when Japanese retreated from the island. During the retreat, The Yūgumo rescued all 237 survivors of her sister-ship Makigumo after it struck a naval mine while executing a manoeuvre to avoid torpedos from a pursuing U.Ss PT boat. Yūgumo continued in a troop and supply transport role between Pacific islands till May 1943 when she docked to the Yokosuka port at the home island, where she received maintenance and an additional crew training. In June she sailed north to the Kuril Islands and then to the Aleutians, evacuating Kiska island with 479 men returned safely to Japan.

The Yūgumo's final encounter was the Battle of Vella Lavella in the Solomon Islands on October 6. Here, during a night encounter shrouded with poor visibility and terrible weather conditions, Commander Matsuji Ijuin failed to identify U.S. ships in the local area and sailed his formation of four destroyers right into their line of fire. At 20:55, upon finally realizing the error of the predicament, both sides released torpedoes, with Japanese ships turning hard to the starboard (right) and opened fire with their deck guns. Yūgumo being the closest to the enemy received the bulk of the gunfire and soon started burning. At 21:01 Yūgumo's torpedo hit USS Chevalier (DD-451, Fletcher-class) detonating the forward magazine and tearing her bow off all the way to the superstructure. Despite this brutal blow, the Chevalier still stood afloat and fired torpedoes back at Yūgumo, resulting in a direct hit at 21:05. Unthinkable, only five minutes later at 21:10, the Yūgumo sunk, while surprisingly Chevalier was still afloat. Unable to be saved, at 23:26 Chevalier's captain gave the abandon ship order, followed by scuttling by a torpedo from the USS La Vallette. Later, the detached, still-floating bow of the Chevalier was found approximately mile away and also scuttled with depth charges. After the Yūgumo's sinking several sailors were rescued by her sister ship Kazagumo, however, a number of Japanese sailors were captured by the U.S. PT boats. There are two accounts of the events following the sinking, with one reporting a story of a captured U.S. lifeboat from the wrecked Chevalier, while the other reports a raft made of Yūgumo's remains. Either way, over 20 sailors made it back to the Japanese-controlled Bougainville island after refusing a rescue from one of the PT boats.

Out of the 241 man crew at the time of her sinking most died at the sea that fateful day.