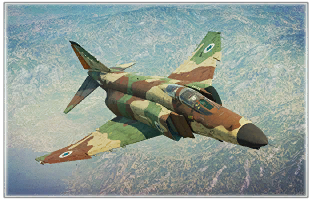 The F-4E Phantom II is a rank VII Israeli jet fighter with a battle rating of 11.0 (AB/RB/SB). It was introduced in Update "Winged Lions".

This aircraft is almost identical to the American F-4E Phantom II with little changes like Israeli weapons.

The F-4E Phantom II (Israel) is armed with:

The F-4E Phantom II (Israel) can be outfitted with the following ordnance presets:

The F-4E Phantom II is well-suited for most in-game situations. For attacking ground targets, the plane is armed with an assortment of bombs, rockets, and missiles. Against air targets, players may employ the vehicle's deadly air-to-air missiles and frontal cannons. Three externally-mounted gunpods may be equipped. Although they will undoubtedly increase the vehicle's destructive capabilities, they also appreciably hinder flight performance through induced drag. In many situations, one front-facing cannon is all that is required to dispatch an opponent aircraft. As for the missiles, the ones used by this plane are average at its rank, comparable to the R-60 missiles equipped by the MiG-21MF (Germany) and the MiG-21SMT (albeit with worse manoeuvrability). The AIM-9G missiles are most effective when fired from between 2 to 4 km away from the target. Any closer will make it harder for the missile to hit the target and the end result could be a miss. At higher altitudes the AIM-7E-2 missiles can ensure better results when shot from 4 - 6 km range as they are almost impossible to dodge at these heights.

The F-4E has a high rate of climb. This is however where most of its performance advantages end. Due to its weight, the Phantom has rather mediocre acceleration, and not a very high top speed. It is not advised to dogfight anything other than Starfighters and other Phantom variants, as the F-4E has a very poor turn rate. Although the aircraft has better energy retention than most of its opponents, it still bleeds considerable amounts of speed while turning, which can't be regained very quickly due to the aircraft's heavy weight. It also performs quite poorly at low speeds, which is also caused by its weight.

Israel was a prominent user of the F-4 Phantom II, having acquired its Phantoms starting in 1968. At first, the USA was unwilling to offer Israel the F-4, but developments in 1967-1968 led the USA to reconsider its position. Notably, a French embargo of Israeli aircraft and the defection of a Soviet MiG-21 convinced the USA to sell its F-4Es to Israel. The first of these aircraft arrived in January of 1968, nicknamed Kurnass (Heavy Hammer) in service.

Israeli Phantoms saw their first combat action in the War of Attrition (1967-1970) against Egypt, where they were used against Egyptian ground and air targets. During this time, more Phantoms continued to be delivered including six RF-4E reconnaissance Phantoms. During the Yom Kippur war, Israeli Phantoms were once again used against air and ground targets. This conflict also marked the debut of the AGM-65 Maverick in Israeli service shortly after the missile entered service with the USAF.

In total, Israeli Phantoms scored ~116 aerial kills against Arab aircraft between 1969-1982 compared to ~55 combat losses (total number disputed). The last Phantom was delivered in 1976, with a total of 204 aircraft delivered, including some as replacements for aircraft lost during the Yom Kippur war. In the last decades of the 20th century, the Phantom was complemented with newer aircraft such as the F-15 and F-16; the last Israeli Phantom was retired in 2004.