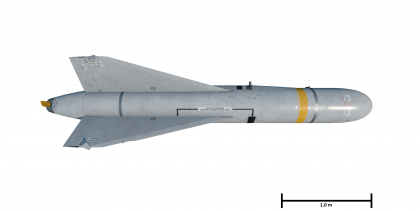 The AGM-62A Walleye I guided bomb (scale is approximate)

The AGM-62A Walleye I is an American guided bomb for aircraft use. It is one of the first guided bombs introduced into War Thunder in Update "Ground Breaking".

In War Thunder, the AGM-62 has a TV guidance sensor similar to the AGM-65B missile. It is best used against ground targets, moving or static, and when there are no SAM threats present. Attempting to use the AGM-62 in a SAM heavy environment will likely get the launching aircraft shot down, as by the time one gets to a proper release altitude and speed, found a target, and then dropped it, a SAM system will have likely already spotted and engaged you (often while you're busy searching for a target). Furthermore, the slow moving, predictable nature of the Walleye means that radar guided AAA can easily destroy it should they spot it.

The AGM-62 can also lock positions on the ground making it difficult to determine when the guidance system has locked onto a vehicle/target or the position near the vehicle/target. This is an issue for ground realistic battles where a stopped target may start moving at any moment making it important that the vehicle is being tracked, and with no way to determine whether the target or the ground is locked, it can make these weapons somewhat annoying to use in ground RB. Furthermore, the AGM-62 uses whatever bomb timer you have set, so remember to reset it to "0.0s" when selecting Walleye loadouts, as a bomb delay for the Walleye serves no purpose.

Also remember that in night battles the sensor on the AGM-62 cannot lock anything, making it useless, so choose a non-Walleye loadout in said battles.

The original concept of a glide-bomb was a bomb that was essentially equipped with wings to allow a bombardier in the cockpit of an aircraft to guide the bomb into the target by means of wires or radio control, typically by using a joystick. Examples include the early VB-1 AZON, which was in essence a bolt-on tail assembly for the AN-M65A1 thousand-pound general purpose bomb that could steer the bomb left and right, to the gargantuan VB-13/ASM-A-1 TARZON, which mated a radio-control system for an earlier development of AZON called RAZON to the massive British-designed 12,000-pound Tallboy Bomb, designed to be dropped from the B-29 Superfortress on large, hard targets, such as enemy ships and factory complexes. The two bombs, for their time, were relatively successful, but still exposed several inherent vulnerabilities to their design. 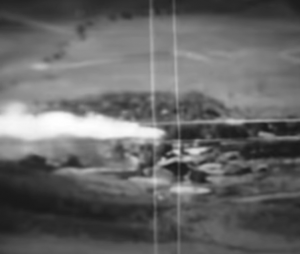 Rifle! An early Walleye's seeker footage, presumably from combat in Vietnam. Note the footage grain and the eight lines running crosswise transposed over the screen. These eight lines show where azimuth and elevation are in relation to the bomb, as well as outlining a square that shows what the bomb is currently guiding onto.
The first problem was that in order to guide such a weapon, an aircraft must fly straight and level, as well as staying in a position where the bomb can still be seen from the bombardier's sight, or at the very least, the cockpit. The technology of the time limited the AZON and TARZON to Azimuth Only, which meant that the bomb required the bombardier to aim the bomb like a regular bomb, and then provide minor course corrections using the azimuth system. The bomb could not, for example, be steered into the path of an oncoming train, nor track and eventually hit a ship moving towards the dropping aircraft. AZON and TARZON were thus usually employed against large, wide targets, like railway bridges, marshalling yards, factories, and dams, with great success. Destroying a moving target was very much. Other attempts at self-guided bombs of the era, such as the ASM-N-2 "Bat", used radar. Radar technology, while having come far since the turn of the century, was very much still in its infancy compared to the modern day, and the Bat was easily confused by ground clutter.

The Walleye's genesis came about thanks to a TV-loving NAS China Lake engineer named Norman Kay. In his spare time, Kay enjoyed creating television sets, and in 1958, he developed a camera that could follow and trace moving items in a picture by using a "blip" that it could project. By using a piece of circuit-board, Kay had just created the first device capable of tracking moving objects by using the difference in contrast between said item and the background. Later refinements would follow, and with a team of fellow engineers including Jack Crawford, Dave Livingston, George Lewis, Larry Brown, Steve Brugler, Bob Cunningham and long-time friend William H. Woodworth, would engineer the bomb that would eventually become Walleye. Among other challenges that they faced and defeated were refining the bomb's trajectory, eliminating the use of vacuum tubes in order to both simplify production and to ensure that the bomb was capable of making the turns and twists needed by a guided weapon, and withstand the shock of carrier catapult takeoffs, and the dilemma of procuring funding- initially by wheedling funding away from the AIM-9 Sidewinder project, which was concurrent to the tv seeker's development. By 1963, the development of the bomb had become official, and after a period of competition between various firms, Martin-Marietta won the contract in 1966 for full-rate production.

The AGM-62 was engineered to have a link between the seeker and a small TV monitor in the launch aircraft's cockpit, which is what would be used to select the target for the seeker. In the words of one of the engineers- the seeker "wasn't smart enough" to know that "a bridge was a bridge", but it could use the contrast between the bridge and whatever surrounded it and home in on the patch of contrast differential. Proposed features for the first iteraton included a datalink, which would not be integrated on initial Walleye I variants. However, the camera could still be used to see where the bomb was going, which would be important for allowing fire-and-forget capability. Pilots could now drop a bomb and then immediately turn away from the target, monitoring the bomb's progress, and once the data-link ability was integrated, provide course corrections for the bomb.

Walleye I used a thousand-pound warhead from the 1,000 lb Mark 83 General-Purpose bomb, recently developed in the 1950s in response to the need for lower-drag bombs. The unit was initially powered by a heavy set of lithium-ion batteries, but these were soon replaced by a ram air turbine on the back of the bomb, giving it the distinctively large propellor, different from propellor-driven tail and nose fuzes on older GP bombs like the AN-M65A1 that its predecessors had used. Large, triangular fins driven by hydraulic actuators were attached onto the rear, allowing the bomb to move left and right, and stabilize on the target. The seeker was the first-ever fully solid-state TV camera in existence. The bomb was meant to incorporate a revolutionary new data-link feature to allow the pilot to aim and steer the bomb while in flight, but tihs feature was temporarily dropped due to time constraints. Later versions of the bomb would reincorporate this feature into the bomb, allowing mid-flight course corrections. The bombs would find great success in Vietnam, chalking up successful missions such as the final destruction of the infamous Thanh Hoa Bridge and several successful missions against power plants, including a raid that destroyed Hanoi's main source of power a mere two days after Ho Chi Minh's birthday. The bomb would continue to be used, including with the data-link upgrade, during the Gulf War in 1991, after which it was gradually retired from US Navy and Air Force service as newer warshots, such as the GBU-15, AGM-65, JDAM and improved Paveway Variants came into service, and improved targeting pods allowed for laser-guided bombs to be more easily guided onto target.