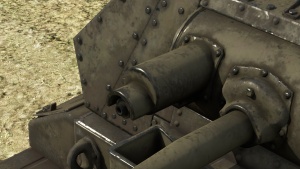 The Vickers machine gun was only outfitted on a few inter-war tanks, of which include the following:

The Vickers machine gun can only be equipped with one ammo belt consisting of one Incendiary Tracer (IT) bullet, followed by two Armour Piercing (AP) bullets. Neither bullet has much penetration (maximum of 10mm), however, the AP bullet performs much better than the IT bullet.

Due to the very low penetration of this weapon, it is largely ineffective against enemy armour (although you may be able to penetrate some vehicles with extremely thing armour). The gun is primarily useful for killing exposed crew members in open-topped vehicles, and SPAA, which are fairly common at the low battle ratings this gun is found. The gun can also be used for ranging, as well as marking enemy vehicles and obscuring the view of enemy players (shooting at their gun sight). You can use the gun against aircraft however it does minimal damage, has a low rate of fire and is usually co-axially mounted, making hitting aircraft difficult.

The Vickers machine gun (sometimes simply called the "Vickers gun") is a predominantly water-cooled (however, there are also air-cooled variants) .303 (7.7 mm) British machine gun produced by Vickers Limited. Its heritage dates back to the Maxim Gun, which was invented by Hiram Maxim in 1884, and was one of the first recoil-operated weapons ever built. After Vickers purchased the Maxim company in 1896, they worked on an improved version of the Maxim gun, reducing it's weight and increasing reliability; creating the Vickers machine gun in 1912. The British Army formally adopted the Vickers gun as its standard machine gun on 26 November 1912. The Vickers gun served through the First World War and second world wars as an infantry gun, as well as being fitted to many tanks and aircraft. It was withdrawn from service with British forces 1968, last seeing operational use was in Aden Emergency in 1963. It was replaced in UK service with the L7 GPMG (seen in game as the L8A1, L8A2, L37A1 and L37A2), a British version of the FN MAG.

During the period before WW1 and WW2 the Vickers machine gun was fitted to a number of tanks, however with the outbreak of WW2 the BESA (7.92 mm) machine gun became the standard tank mounted weapon of the British Army (hence the Vickers gun is only seen on a few inter-war vehicles in-game).