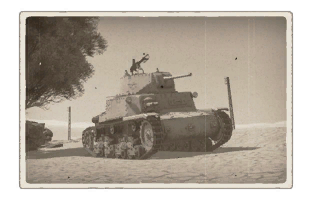 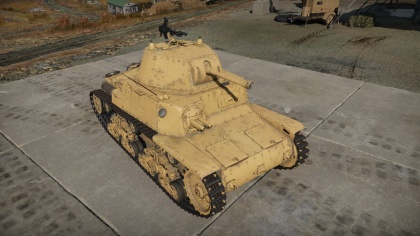 The M13/40 (II) is a rank 1 premium Italian medium tank. It was introduced during Update 1.85 "Supersonic" as a battle reward in the 2018 War Thunder Festivities. It has since been available for purchase with Golden Eagles.

An average gun for its BR can penetrate the front of some of the tanks it will face and one-shot them. It has decent armor, strong enough to bounce shots at a high angle. The worst aspect of the M13/40 (II), as with the rest of them, is its speed. Poor acceleration makes it hard to achieve its top speed of 32 km/h, and it's even less worth it to go up hills with worse vertical angles.

Armour is same as all M13/40 - Angle your tank to have 36 to 50 mm effective armour thickness and use it to block enemy shots. Destroy British tanks as soon as possible, as every single one of them can destroy your tank.

However, the default camouflage is now the desert one, which means you will be at a disadvantage on non-desert maps at first in terms of stealth.

Like the M13/40 (I), it can be used as a breakthrough tank to push through enemy defences and slowly, but surely destroy them, while driving at them at an angle to maximise armour effectiveness. This role is reinforced by a fact that this tank has better reload rate and doesn't have to suffer two counter-shots for one, and can destroy all the tanks that pop out of cover with nearly no break.

The important difference from other models is that your gun depression is somewhat worse, so scaling hills is even more risky and has less worth than before. Instead, focus on pushing enemy tanks, as your fire rate when trained is 3.5 seconds, and your ammunition is good enough to destroy most tanks in one shot.

Intended to replace the unsatisfactory M11/39, the M13/40 retained its main mechanical features, but with a more powerful gun in a fully rotating turret. The M13 was slow, unreliable, and suffered from the tank commander doubling as the gunner. Similar to early Russian and French tanks, it did not receive radios as standard equipment until 1942. Nevertheless, it became the standard Italian medium tank from 1941 on, and is the best known Italian tank of the war. In War Thunder, the M13/40 (II) represents those made in the mid part of the production run, with hydraulic traverse gears and fixed radio installations.