Difference between revisions of "Hs 123 A-1" 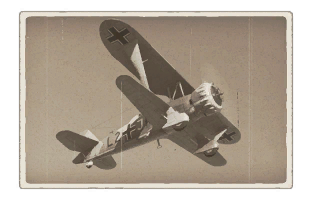 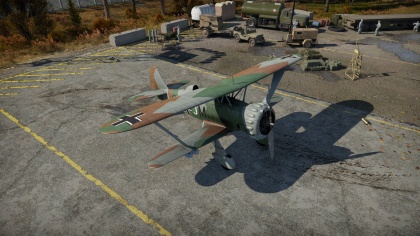 The Hs 123 A-1 can be outfitted with the following external ordinance:

In AB, the Hs-123 is a ground attacker/emergency fighter. Use your bomb load and guns to dispatch as many ground targets as possible, while making sure to keep the enemy off of your six. if someone does get on your six, pull a snap turn and keep him from getting a good shot on your for as long as possible. If you can't get onto his six you'll have to hope help arrives soon.

In RB, the tactics change massively. Use your bomber spawn to stay above the enemy team, and dive only after the enemy fighters have passed below you. Hit their tanks and other targets with your bombs through either dive bombing or low level bombing (set a 2 second fuse then fly as low as you can, dropping just before you lose sight of the target). After your bomb load is exhausted, engage soft targets for a while. If there are none it's time that you kill some of the enemy team, begin to climb and look for damaged fighters/attackers returning to their airfield, then pounce on them. Your 7.92 mm machine guns are good, but be sure to aim for wings, as most aircraft you'll face will likely be able to absorb most of the MGs you put into their fuselage.

First flying in 1935, the Hs-123 was Henschel's response to the 1933 Reich Ministry requirement for a dive bomber. After the Successful delivery of 250 aircraft it's christening of fire began. In 1936 the Hs-123 was sent to spain where it's usefulness as a close air support aircraft was well known. Being able to accurately place it's powerful bombload and reliability outweighed it's short range and saw extensive service in that role. After the Beginning of World War 2, The Hs-123 saw service on the front line airfields, where it's quick turn around time and ability to take heavy damage was appreciated by pilots and ground crews alike. Despite this the Luftwaffe considered them obsolete and most squadrons re-equipped to Stukas or Bf-109Es (Jabo variant).

At the Beginning of Operation Barbarossa the Hs-123 saw it's rebirth, where it's ability to survive heavy damage and it's reliability shone through. Even in the Winter, where more modern aircraft would fail to even start, Hs-123s could be counted upon to provide close air support through the bleakest of weather. In 1943, Generaloberst Wolfram von Richthofen asked if production of the aircraft could be restarted, however the jigs had been taken down in the henschel plant all the way back in 1940.