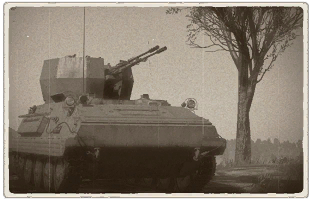 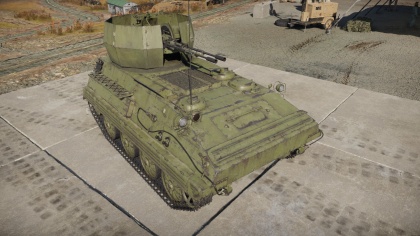 The ZSD63 is a rank II Chinese SPAA with a battle rating of 4.0 (AB/RB/SB). It was introduced in Update "Starfighters".

The ZSD63 is currently the first vehicle in the Chinese SPAA line and offers some much needed anti-air capabilities to Chinese tankers. Though it looks rather like a jury-rigged technical from the Middle East, having a turret with twin autocannons grafted on an APC chassis, it packs some serious firepower for its rank. A slight brush from the ZSD63's rapid-fire cannons will tear most aircraft to shreds. Lightly armoured ground vehicles will also learn to fear the onslaught of AP rounds, which cut through them like a buzzsaw. While it has excellent firepower, the defensive capabilities are very lacking; the large size and paper-thin armour make it an attractive target to anything on the battlefield. Other issues include the limited belt size, with each gun only having 40 rounds, and the truly abysmal reload speed. Despite these challenges, the ZSD63 can be a very fun vehicle to play and will serve well as an anti-air vehicle even beyond its lowly rank; the succeeding Chinese SPAAs have a much lower rate of fire and are harder to use against aerial targets until the WZ305 and its fused shells are researched.

Despite its armoured box look, one would be hard pressed to call the ZSD63 "armoured". The armour is almost entirely 8 mm thick all-around, save for the 12 mm upper glacis. The near vertical sides may as well be unprotected. Adding insult to injury is the high mounted open top turret with the crews' heads exposed on top like pumpkins. Even coaxial rifle-calibre machine guns stand a fair chance of penetrating this vehicle. While you might survive a few glancing bullets or have shots pass through the empty rear compartment, the best survival tactic is to avoid being seen and stay close to cover for quick retreats after firing off a few bursts.

On the other hand, the extremely thin armor will result in most shells over-penetrating, given that most fuse sensitivities are around 10 mm. An over penetration through the empty space is likely to do little to no damage. Although you might survive, it is still a clear warning that you are exposed to lethal firepower and you should immediately relocate if possible.

Note that the ZSD63 can be hull-broken. Avoid being hit by HEAT or HE rounds.

Mobility is good, though somewhat underwhelming compared to what the statistics might suggest. With 19 hp/ton, the ZSD63 accelerates to 60 km/h forward on paved roads and the suspension works quite nicely on all kinds of terrain. Off-road speed is less impressive, topping at around 30-35 km/h. The 8 km/h reverse speed leaves something to be desired but is better than most contemporary vehicles. Overall, the ZSD63 is mobile enough to follow teammates and flank, though it is not exactly lightning fast and there should be no expectation of arriving at the battlefield far ahead of everyone else.

The ZSD63 is arguably the most lethal autocannon system at its rank in-game. Each cannon fires a staggering 10 rounds per second (600 rpm) with extremely high velocity and precision. The excellent turret traverse speed makes tracking targets very easy. Aircraft are instant confetti under its FI-T rounds. Although the AP-T penetration at 100 meters is only 60 mm, declining to 47 mm at 500 meters, the high fire rate and high velocity allow multiple hits at weak points until a kill shot is made. Light tanks, tank destroyers, and other SPAAs are generally easy targets. Medium units should not be too difficult to eliminate either, and even heavy tanks can be disabled by the cannons when aimed at vulnerable locations. The weaknesses are the limited belt capacity and the extremely long reload time, so be highly conservative with your fire control. This monster will be just as effective in Rank VII as in Rank II.

Avoid trying to switch belts in the middle of combat as might be done for other SPAAs. Doing so will put the guns out of commission for potentially more than 30 seconds, which is unhelpful to say the least if there are enemies around. This is also why it's important to consider bringing full AP-T belts at all times. It is capable of both anti-air and anti-tank. Most planes cannot resist more than 2 AP hits from your deadly 25mm guns, so there is really no need to bring HE / default belts. Spending minutes to switch belts for different targets only makes you defenceless and vulnerable.

Ammo racks of the ZSD63

When attacking ground units, be extremely cautious and avoid exposing your weak armour. Choose a pure AP (AP-T) load to double the chance of penetrating hits and head straight to good ambush spots. Wide flanking manoeuvres are a good idea, allowing you to attack the weak sides of light targets. Going wide, you will likely encounter other weakly armoured units like the popular M24 Chaffee, which is very vulnerable to the 25 mm cannons. Know your targets and aim for weak points. The ubiquitous Shermans are generally tough customers from the front, where at most the transmission housings or perhaps ventilators can be penetrated, but the terrible hull side armour is a good target. The lower side armour behind the tracks is an especially good weak point if facing Shermans with applique side armour, and spraying a wide burst in that area can knock out the transmission, ammo, and driver. Other medium tanks like the Pz.IV F2 and Chi-Nu are vulnerable from the front at close range. T-34s are tougher targets and can only be reliably penetrated frontally in the turret cheeks (for "small turret" models like the T-34 (1940)) or the turret ring at close range. The hull sides are thicker and better sloped than other medium tanks and also have fuel tanks protecting the turret crew, so during flanking attacks, try to shoot the lower hull armour to knock out the engine and driver/machine gunner before going for the turret side. The AP round does not have explosive filler so multiple penetrating hits are needed to defeat a tank. Remember that the ZSD63 also has access to artillery, a very useful spoiler to keep your targets off balance.

For self-defence, it is important to know how to disable opponents quickly and efficiently, with minimal time and ammunition expenditure. Obviously the optimal situation is to knock out a target's crew before they can attack the ZSD63, but this will not always be possible. The twin cannons can destroy tracks and tires almost instantly, but for turreted vehicles this will not prevent the target from returning fire. If only one track is destroyed, even a casemate tank destroyer can potentially scoot around enough to fire back (though this can expose their sides). Destroying the engine is a good move when shooting from the sides or rear for this reason. Destroying gun barrels is also a good idea, but this can be difficult if said barrel is pointed directly at you, presenting a small cross section. Destroying turret rings can also be helpful, but this is not really possible outside of close quarters, and some tanks like Shermans don't even have vulnerable turret rings. Juggling these techniques takes practice, and some may end up using a lot of ammo, so it's best not to use the ZSD63 offensively against multiple well-armoured opponents. Damage targets just enough to save yourself and allow your teammates to finish them off. A target with upgraded crew skills might be able to repair their damage before the ZSD63 can reload!

When it comes to anti air duty, you must avoid firing continuously for longer than 1 second or so. The cannons have noticeable recoil and the limited ammunition capacity does not allow for much "Spray and Pray". Before any planes spawn, it is recommended to locate yourself between the points and the spawn, and find some hard covers. This way you can get close to most of your teammates and target incoming planes easier, you don't need to worry about getting shot by enemy tanks, and you can use the covers to dodge strafing planes. Then, as soon as an enemy plane spawns, slowly shoot single salvos towards it to draw its attention. Most planes will go head on for an easy SPAA kill, knowing that all SPAA have weak armor and not-lethal-enough firepower. If it is a bomber, position your hull sideways for quick retreat from bombs. Planes diving straight towards the ZSD63 are very threatening, but at the same time they would have signed their own death warrant; use your great gunsight magnification to work out the plane's flying path, and spray a 1-sec burst of 25 mm rounds in their flight path. 1-3 hits will shred most planes apart. With this method a 40-round clip can take out 1-2 planes. Fire conservatively if the target is not flying directly towards or away from the ZSD63.

Note that the default gun camera seems to be located between the guns, as a result when shooting at a target your vision will be mostly obstructed by the muzzle smoke. Some solutions include moving slightly away from the old spot to get out of the smoke, or use the "camera from gunner sight" option, although it may not be practical for other tanks.

Expect to go to allied cap zones more than most vehicles to replenish ammo and possibly another crew member.

The 装甲输送车 (Zhuangjia Shusong Che, Armoured Personnel Carrier) ZSD63 was China's first domestic armoured vehicle design. China initiated the work in 1958 with a prototype finished in 1960. It is also sometimes called the "Type 63", both a name system used to refer to Julian year of production start. The basic steel box design is simple and functional, designed for small arms protection and have all terrain operation with amphibious capabilities. Although it is a domestic Chinese design, the Soviet design influence is strongly visible. Thousands have been produced with hundreds sold to other countries making it one of the most successful military vehicles built.

This SPAA version mounts a turret on the roof armed with twin PG87 which is based on the Soviet ZU-23-2 23 mm auto cannon which was modified to use domestically produced 25x183B 25 mm rounds. As the name suggests, this weapon was put in production in 1987 making for a retrofit of an approximately 23 year old chassis. This turret seems to be literally mounted on the roof, as there is no hole into the hull of the ZSD, likely an attempt to maintain is amphibious ability despite additional weight. In addition, a pair of extending feet for stabilization were added, but are not functional in-game. It is likely in real world operation the vehicle had to be stationary, feet planted, and crew externally passing the large and heavy ammo magazines to the loaders on top.