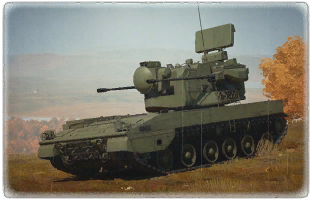 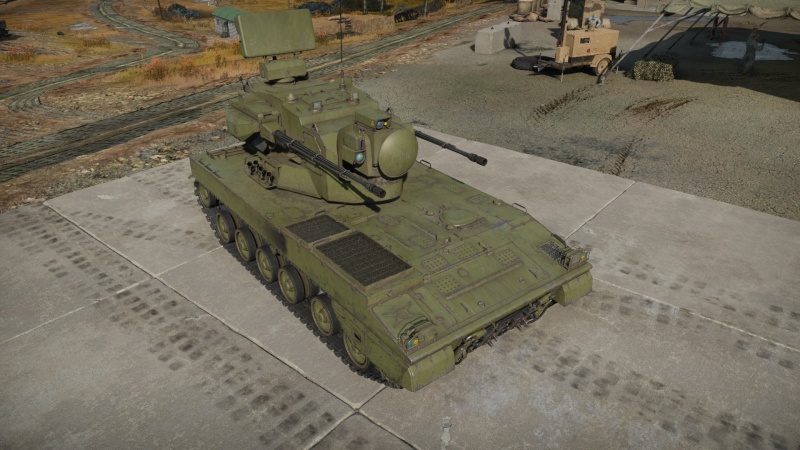 The PGZ09, nicknamed the "猎手", or Hunter, is a rank VI Chinese SPAA with a battle rating of 8.3 (AB/RB/SB). It was introduced in Update "Red Skies".

The PGZ09 is a Chinese counterpart to the Flakpanzer Gepard and Type 87 designed to intercept incoming aerial targets such as helicopters, drones, or cruise missiles. With its high off-road speed, advanced electronic system with separated search/tracking radar, electro-optical tracking system, as well as a 2nd gen thermal sight, it can prove deadly to both careless aerial and ground targets and provide field air-defence to its allies wherever they are with its mobility.

The chassis provides sufficient protection to the crew against small-calibre guns and shrapnel from explosions. As it is a SPAA, only the hull front is sufficient to stop HMGs and maybe some autocannons, while the turret itself offers little protection with only 8 mm of armour. Vulnerable to overpressure damage, the PGZ09 cannot survive artillery strikes, bombs, rockets or high-calibre HE shells. Its tall search radar is very visible and therefore likely to attract fire. If it is hit by anything with explosive filler it will be broken, the shrapnel and blast will also pass down the thin turret roof and damage/destroy components like the targeting radar and crew. Thus you need to be aware of whether the search radar antenna is exposed even when the tank is behind cover.

Thanks to the powerful 8V150 engine producing almost 800 hp, this turbocharged diesel engine lets the PGZ09 have a satisfying top speed of 65 km/h, a vast improvement over the WZ305 and making it one of the fastest tracked SPAAGs along with the Gepard, AMX-30 DCA and VEAK 40. It can follow teammates with ease and retreat to a safe position if anything comes at you with its -15 km/h reverse (only its tech-tree successor PGZ04A, ZTZ99A has higher reverse)

As a variant of the Swiss Oerlikon GDF-002, the PG99-35-2 shares the same traits as the 35 mm Oerlikon KDA guns found on other nations' SPAAs: high rate of fire, high muzzle velocity, and sufficient penetration to tear down most vehicles from the sides with ease. But due to the internal design of the PGZ09, it has lower ammo count than its Western and Japanese counterparts, carries only 40 APDS rounds as emergency anti-armour and most of all: its inferior -2° depression angle where it will be a major problem at complicated terrain. 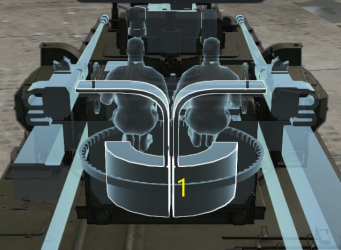 Ammo racks of the PGZ09

Like its counterparts in NATO and Japan, speed is your friend and the PGZ09 is among the fastest ones, as an SPAA, your first priority should be aircraft and helicopters. At its BR range, few aircraft come with an RWR, so there should no worries on keeping the radar always on. If brought to a higher BR, do not keep your radar on for extended periods of time, as it will give yourself away to aircraft with RWR, so turn it off and only utilize the tracking radar after enemies have been spotted; alternatively, it comes with optoelectronic tracking system which helps concealing yourself from RWR equipped aircrafts (hotkey Y-1-4 by default changes between its tracking systems) or tracking low-flyers with excellent accuracy; another thing worth mention is that it's the only Oerlikon GDF-002 equipped SPAAG that comes with a thermal gunner sight (2nd generation), further accelerate your speed on spotting enemies from the background. Keep in mind your subpar ammunition count, so unless in emergency or fast-and-close targets, trigger-happy firing is not an option.

The PGZ09 can also be used in an anti-armour role to a certain extent thanks to the good penetration of 35 mm shells, these rounds are lethal to lightly armoured vehicles and the sides of Cold War MBTs, albeit the PGZ09 has the worst gun depression among SPAAs (at a mere -2°), making it struggle in even slightly uneven terrain, so keep some distance from land-based enemies if you're in a gunfight. Additionally, it has only 40 rounds of APDS at disposal so think twice before unleashing them on enemies. Do remember that those 8-10 mm of steel all-around won't help you too much on stopping some higher calibre machine guns, autocannons and anything with explosive fillers.

Note: when using the PGZ09 in the anti-armour role with thermals on, avoid placing the target at the front-right side of the hull. This is the location of the engine exhaust pipe, to the right of the driving compartment. Its heat will glare the gunner's thermal optic and heavily disrupt your aim.

When locking onto an air target using your fire control radar, the green square that captivates the target will gently float around, leading to the guns bobbing around as well. This can considerably decrease the accuracy of your bursts as your guns are not aiming at the exact centre of the target. The low accuracy is especially noticeable when the target is close to stationary, for example targeting a hovering helicopter 3 km away. The fire control radar will also give a wrong lead signal when the target is flying at treetop level. Therefore to counter these issues, you must switch to the optronic tracker. The PGZ09 is equipped with an optronic tracker just like that of the SIDAM 25 that gives more accurate lead. Open the multipurpose menu, then press 1 - 4 to switch to the optronic tracker. You will see that the original light green arc indicating your fire control radar scanning area decrease from 180° to ~30°. The optronic tracker gives a way more precise lead that won't float around or get interfered by ground clutter, and also allows you to target aircraft when the fire control radar is destroyed, making it the ideal targeting method against aircraft. You will however have to manually switch to it in every battle.

During the late 1980s, after attempts to make their own AA guns to replace the obsolete Soviet 37 mm, the PLA sought instead to purchase the renowned Swiss Oerlikon 35 mm GDF-002 cannon. In 1987, a deal was made and examples were imported along with the Skyguard system, and in 1990, China got a license for domestic production under the name PG90. When the later arms embargo in the 1990s stopped additional importation, Chinese-made domestic upgrades resulted in the PG99, which is said to be on-par with the GDF-003.

It saw extensive use defending facilities and as a towed gun. The PLAGF found the need for a new SPAAG to replace the PGZ95 (later the PGZ04A) for mobile field air-defense, and made good use of the 35 mm cannon with modern electronics. Early prototypes of the vehicle featured a hull based on ZSD89 APC. PLAGF also proposed a wheeled version, but this was ditched due to difficulties in mounting all the equipment onto a wheel-based chassis.

In 2011, a new type of SPAAG was seen on state television, designated "PGZ07" by observers, little was known about it until the Victory Day parade in 2015 where this SPAAG was officially revealed by the PLA, officially known as the PGZ09 and it shared the same universal chassis with PLZ05 SPH. Equipped with the latest doppler search radar and optoelectronic equipment onboard, AHEAD and airburst shells, and the ability to equip 4 surface-to-air missiles, it, along with its predecessor the PGZ04A, serve as the cornerstone of the PLAGF's field air-defense system.