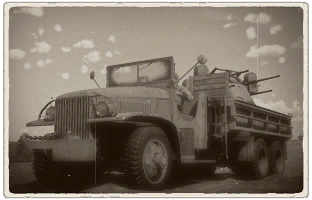 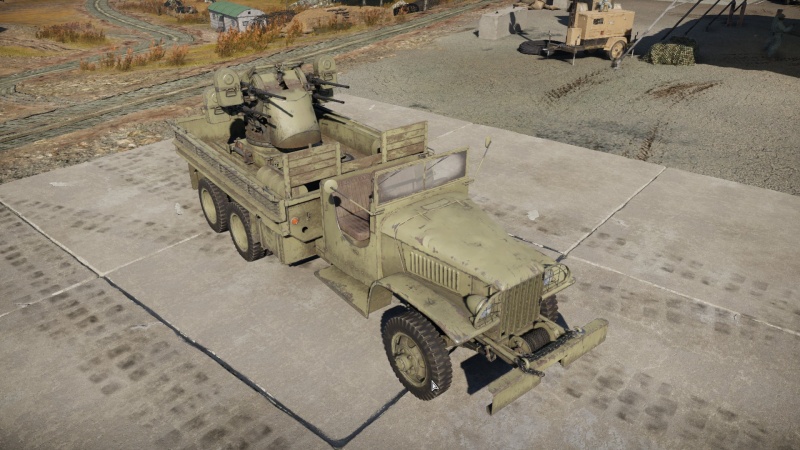 The CCKW 353 (M45) suffers from extremely poor survivability that is even worse than some of its SPAA counterparts at a similar BR. Armour scarcely protects the two drivers at the front, the most protection for them being the engine in front of them and the small pieces of metal "doors" below them. Therefore they are almost entirely exposed, and can be easily knocked out by any weapon available to the enemy. The only crew member of the vehicle with any protection to speak of is the gunner - a 12.7mm plate covering his position. It likely won't save the gunner however, as it can only protect against rifle calibres. It goes without saying critical components like engine, transmission and gun aiming drives are all poorly protected. Taking all of this into account, stay as far away from any areas receiving artillery fire as it can destroy the vehicle extremely easily.

The CCKW 353 (M45)'s mobility is average. Its top speed on hard surfaces (e.g. city road, dry dirt) is quite fast, at ~60 km/h, though it does need a few seconds to accelerate to that speed. It responds well in turns, allowing it to navigate through urban environment with relative ease.

Just like every other wheeled vehicle, however, it is very sluggish on soft terrain such as snow or mud, especially when it is just starting to accelerate. Its reverse speed is poor (only -5 km/h) which is something you need to take into account when you peek out of a cover. It also has low engine power and light weight, making it very difficult to crush obstacles like metal fences, light poles or even a wooden barrel, thus you need to select the best route in a map to avoid driving into similar obstacles scattered on the streets, usually urban maps have a lot of them. In wild maps, select the route that allows you to drive on roads as much as possible, whether it be a concrete road or a dirt path.

The firepower of the CCKW 353 (M45) is very effective, but only if it is against aircraft and lightly armoured ground vehicles. The 4 x 12.7 mm M2 have adequate fire rate and great fire density, consistent trajectories and good shell velocity, which makes it fairly easy to lead an aerial target and score constant hits. A few hits can usually damage components like cooling systems and skin, but if you are luck enough you may snipe the pilot. In a head-on with an aircraft, the 12.7 mm AP bullets can go through the armour plates on aircraft around this BR, and reach anything behind. The bullets are also great at setting fuel tanks on fire.

Against ground targets, your only targets are wheeled vehicles (e.g. Sd.Kfz.234/2), SPAA (e.g. M16 MGMC) and certain light tanks (e.g. A13). The great fire density of the bullets can easily wipe out multiple crew members immediately upon penetrations. However common tanks (e.g. Pz.IV C, M3A3) are very hard if not impossible to penetrate frontally or even from their side.

The traverse/elevation speed of the gun mount is quite fast, and has great elevation & depression angles of -10/+90 degrees, allowing the player to track fast targets or to combat in hilly battlefield well.

It is not recommended to bring out the CCKW 353 at the very start, because unlike certain SPAAs, this truck is not fast.

For anti-air duty, find a spot somewhere between a friendly spawn and a cap point. This way you can react to unexpected situations effectively: if frontline teammates collapse, you can quickly retreat to spawn; if teammates advance, you can also keep up easily. Do not stay too close to the frontline, as you do not want to face enemy tanks. Unlike the similar M16 MGMC which can resist rifle-calibre bullets, the CCKW 353 does not offer any protection to anything, therefore to protect the two exposed drivers, you will want to find a hard cover, point the truck sideways to only expose the back turret and hide the drivers behind cover. This way strafing planes cannot hurt the drivers, increasing your survivability. Once enemy aircraft spawn, shoot sparse salvos towards them to draw their attention. Do not fire continuously yet, disguise yourself as a slow-firing SPAA (e.g. Sd.Kfz. 6/2) which is less fearsome in the minds of pilots. Upon seeing your tracers, most pilots might choose to go for a head-on with you, knowing that most SPAAs are easy targets. As they dive towards you, fire a long burst and lay a stream of bullets in their flight path, remember to also aim up a little. A few hits from the .50 cals is enough to damage critical components such as cooling systems, control surfaces or even pilots. Keep firing prolonged bursts even when the target aircraft bank away, as they are now low and slow. If a plane drops bombs at you, immediately move back to cover. If the CCKW 353 is used with the 3.7 lineup, be way more careful since aircraft around this BR have either cannons or numerous MGs comparing to the ones around 2.0, and the increased fire density is very fatal for the exposed crew.

Watch out for remaining ammunition. The CCKW 353 has 200 rounds each gun but reloading is very slow, making the CCKW 353 and the team vulnerable in the worst moments. Total ammunition of less than 130 rounds should be emptied and reloaded with full magazines.

For anti tank duty, only target the ones you can penetrate, including armoured cars, SPAAs, light tanks, tank destroyers, etc. With the quad .50 cals it is very easy to wipe out these targets with a short burst. Against tanks, you are very much defenceless but if you are in a safe position, shoot at their tracks or gun barrels. Although this might not damage anything, the hits will grant you assists when they are killed by your teammates. Note: always face the side of the truck towards the direction where enemies are most likely to appear, since the CCKW cannot aim directly forwards.

Relocate immediately if the red "artillery fire" notification flashes. Shrapnel from nearby explosions can badly damage the truck's tires, transmission and crew.

The GMC CCKW-353 was a 2 1/2 ton six-axle truck operated by the US and other Allied forces during WW2. It was the second most produced US truck, with only the MB Willy Jeep beating it in production numbers. The CCKW series as a whole had a wide array of variants and models produced, with over 520,000 units produced between 1940 and 1946. The Republic of China specifically would have the open cab CCKW-353 variant used in a wide variety of roles, from general transport, artillery towing, and fuel trucks, to mounting the M45 Quadmount in the rear bed as a SPAAG. The M45 Quadmount was a powered turret containing four 12.7 mm M2 Browning machine guns and was introduced in 1943. The M45 was most commonly found mounted on dedicated SPAAG platforms like the M16 and M17 halftracks, or the M51 and M55 towed trailers. The M45 could be mounted anywhere including truck beds, trailers, and static positions. Both the CCKW and the M45's service in the Republic of China is undocumented, and it is likely that both were received during, or shortly after WW2. The CCKW-353 was at least seen mounting the M45 in its bed during the 1961 National Day parade. The CCKW was likely phased out by the M35 2 1/2 ton truck during the mid to late 1960's, while the M45 was phased out of service by the T-81 20 mm anti-aircraft gun in the 1980s. It is not known if the M45 or the T-81 has been mounted on the bed of the M35 2 1/2 ton truck in ROCA service.[1]