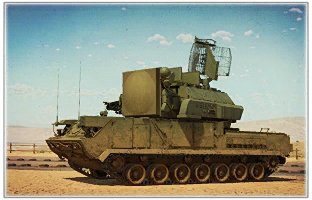 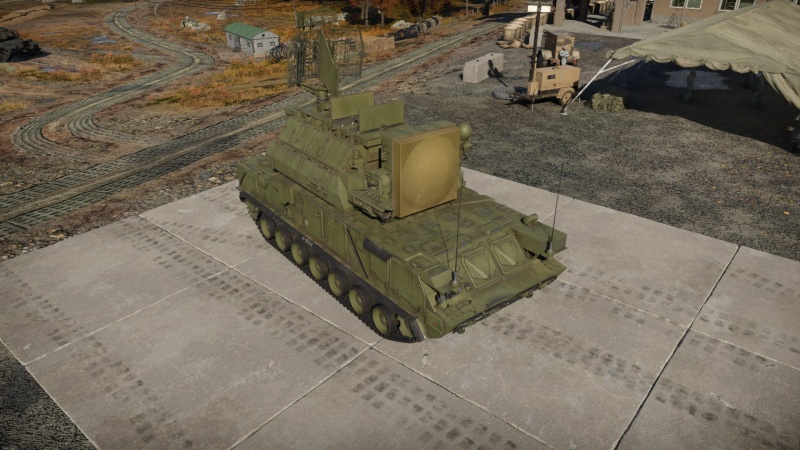 Sitting at the end of the Chinese SPAA line and one of the more recent military purchases of Russian equipment by the PLAGF, the Tor-M1 also marked the introduction of SPAA systems that can track and engage multiple targets at once; with its 8 cell VLS onboard and great mobility even at such a huge size, as well as its 9M331 SAMs, the Tor-M1 will strike fear to any aerial targets and provides a vital long-range anti-aircraft measure for the Chinese tech tree.

The chassis of the Tor-M1 (GM-5955) is based on the GM-335 universal chassis, the same as the ZPRK 2S6 in Soviet service. What makes it stands out is the huge size of the battery system; not only does it have overall large dimensions that are barely smaller than the German FlaRakRad, the huge 9K330 "Scrum Half" radar system also easily gives it away during operation so fold down the search radar after confirmed detection for concealment. Its nature of a mobile SPAA battery also means that it does not have any protection against oncoming shots, the overall protection was only rated for rifle-calibre fire or shrapnel so hiding from enemies' guns and cannons is again crucial for its survival.

Thanks to the V12 diesel engine and transmission with the same gear ratios on both directions, the Tor-M1 is one of the fastest tracked SPAAs, particularly in reversing (almost twice faster than the wheeled Type 93!). This allows the Tor-M1 to keep up with the team for field air-defense, while having more than enough speed to retreat into cover when necessary.

The Tor-M1 system has only one type of missile at its disposal - the eight 9M331 missiles inside its 8 VLS cells. Thanks to its sufficient speed and advanced electronics, along with the ability to track-while-scan and track 2 targets at once, the Tor-M1 is extremely efficient at long-range anti-aircraft operations. While it is one of the most advanced systems in the game, do bear in mind the somewhat limited overload, radar detection angle and the around 1 km dead-zone of the missiles due to the cold, vertical launch (the missiles are ejected from the launcher with compressed air and ignite mid-air) - attempt to terminate any aircraft as far away as possible.

As the long-awaited long-range SPAA for Chinese TT players, Tor-M1 also introduces some unique features from its counterparts in different countries- the most iconic feature is the unique cold-launch VLS cells onboard that ejects the missile vertically, which then turns and ignites its motor from a safe distance. While players can enjoy the aesthetic feature of the Tor-M1, this also means that it has a minimal firing range unlike its counterparts with "direct-fire" SAMs: a 1 km dead zone around the vehicle that can be embarrassing when aircraft show up in the radius at tree-top altitude on very rare occasions. Do remember that Tor is not an SPAAG with guns, so players used to the PGZ04A will need to make extra sure nothing comes too close to handle; teaming up with friendly SPAA armed with cannons or "direct-fire" missiles is also viable for better efficiency. Though the high elevation of the sight can make sure targets that are high overhead (anywhere before 75°) will face a miserable end thanks to the radar system. The other feature of the Tor-M1 is the capability of TWS with up to 2 tracked targets, if in any occasion when there are multiple targets in range, the system can quickly take down two of the locked targets before moving on to the next wave; note that the targets must be within a 15°x15° scan zone of the radar and the other target should be locked via the "Select Radar/IRST target to lock on" button. Depending on the desired accuracy of acquisition, changing the scanning pattern of the radar may be necessary for targets at different altitudes.

The speed of the GM-5955 chassis is very satisfactory for changing positions, while the extreme reverse speed can make sure the Tor-M1 can retreat to safety with ease. However, do remember that it is also a huge vehicle (one of the tallest even with radar mast folded, at 5.1 m), both ground vehicles or aircraft can see such a huge vehicle from a distance; so hide the vehicle at all costs and never move in plain open fields - the speed itself most likely won't save the vehicle, and hits from enemy explosives will very likely overpressure the crew.

Drones - Due to their relatively small size and being high-flyers, drones could be annoying targets to deal with. While they are fragile once hit, do make sure that every shot counts and beware of any other aircraft - players are likely become distracted by drones and miss other, more dangerous, targets.

Helicopters, especially Ka-series - Although the launch range is up to 12 km and able to deal with 2 targets at once (within the same scan zone), it's better for Tor-M1 to take them out straight from their bases for the least risk. Remember to take them down via the IRST tracker for best efficiency, as it doesn't trigger RWR. They might be aware of continuous lock from radars, but it might not be the case when the battlefield is full of missiles which trigger their MAWS - they will need some time to determine whether it is them or their allies being targeted. If players are not confident with the dead-zone of 1.2 km, work together with gun-equipped SPAA to eliminate close-range blind-spots.

Attackers, especially those with LGBs (ie. Q-5L, MiG-27K, Harrier GR.7) - A very common situation for top-tier air-defense is that, due to the awareness or carefulness for possible SPAAs in operation, most attackers choose to opt for a very high entrance altitude for the best result against the team and often against Tor system itself; in most cases, those who fly straight into the battlefield or are concentrated on ground-attacking will often miss the trail of the 9M331. For aircraft that are flying too high for radar acquisition, it is better to leave them for interceptor aircraft or other SPAAs with "direct-fire" missiles.

The Soviet Army developed a complete and extensive field air defense network to repel possible oncoming air assaults from their enemies, with a great variety of missile systems for short-range defense. Although there are SA-8 Gecko/9K33 Osa systems for the army, the Soviet Armed Force still requested a successor to the 9K33 system with land/sea-based systems for different platforms, tackled by the joint efforts of Antey, Fakel and Altair (now part of the Almaz-Antey). After extensive tests under the restrictions from the armed forces and the use of their latest electronics including PESA radar, the ground-based version Tor (9K330) entered service in March 1986. The -M1 variant (9K331) was a further improvement for the system including the capability of attacking 2 targets simultaneously, revised missiles, new FCS, as well as new electronics for complicated battlefields with electronic interferences. The new system joined the Soviet Army in 1991.

While they were used extensively by the succeeding countries of the Soviet Union and some export customers in various conflicts, the system was also involved in the accidental shoot-down of Ukrainian International Airlines flight 752 (PS/AUI752) in early 2020 over Tehran.

Although the PLAGF had developed some systems of the HQ (HongQi 红旗; Red Banner) family of SAMs including HQ-7 (licensed French Crotale EDIR) and domestic HQ-61 for short-range field air-defense, the load per vehicle and range were deemed insufficient. PLAGF signed the contract with Rosoboronexport for total of 35 systems from 1997 to 1998[1]; these systems including the missiles were then reverse-engineered and improved with new domestic electronics and later known as the HQ-17 system, distinguished by a shorter, rectangular "solid" PESA search radar and AESA tracking radar, as well as longer range (15 km) than the imported -M1 systems.

The "Tor" short-range surface-to-air missile system was put into service with the Soviet Army in 1986. At that time, "Tor" was one of the most advanced air defense missile systems in the world, but almost immediately after commissioning, the Antey Concern initiated an upgrade program. As a result of the modernization, "Tor" received an additional fire control channel, the kill ability of the missile warhead increased, and the algorithms for hitting low-flying targets were improved. The updated system designated Tor-M1 was successfully tested in 1989 and soon after entered service with the Russian army in 1991. At the moment, Tor-M1 is serving in the Russian army, as well as actively exporting.