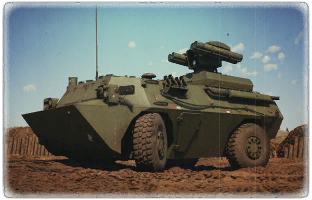 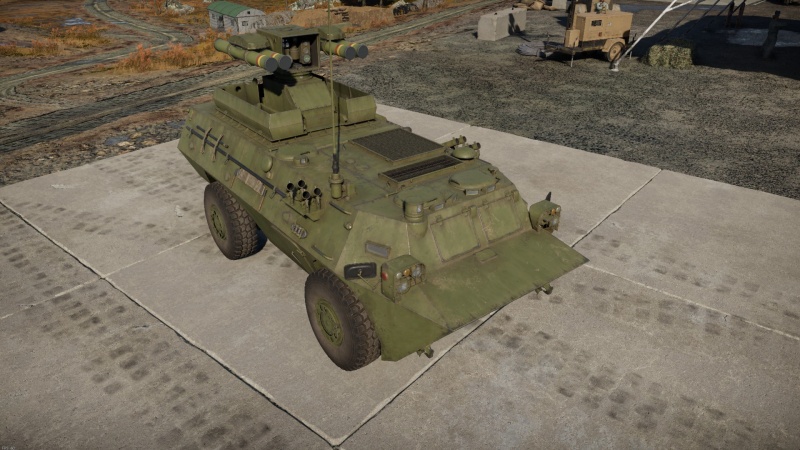 The AFT09 is a rank VI Chinese tank destroyer with a battle rating of 8.7 (AB/RB/SB). It was introduced in Update "Drone Age".

A 4x4 Chinese ATGM carrier from late 1990s with up to 12 HJ-9 ATGMs onboard. Thanks to the HJ-9's unrivaled penetration, sufficiency fast missile speed and good FCS, players can send even the toughest enemies straight back to the hanger from a single hit of HJ-9.

Players of the Chinese tech tree might think that the chassis of AFT09 looks very similar to that of PTL02/WMA301- in fact this is a correct assumption as this is also a variant of the WZ551 chassis aka WZ550 with a 4x4 config; while player of VAB MEPHISTO in France will find many similarities to it. Most of the features on WZ551 are identical on both chassis other than being a 6x6 (551) / 4x4 (550) respectively, especially the overall protection. To sum up the overall protection in a few words, it would be: paper-thin. For the protection, other than the lower part of the chassis, the whole vehicle can only stop rifle-caliber bullets; anything that is larger than a M2HB is more than enough to tear down AFT09 and its 4 crews with ease even at long distance; so be extra careful on where should AFT09 appear.

Since AFT09 is based on the WZ551 chassis but reduced into a 4x4 instead of 6x6, WZ551 family mostly shares the same Detuz BF8L413F engine and ZF 5S-111GPA transmission; this reduction in size also means that it goes faster than its other cousins (at 95 km/h)while has a slightly better but still horrible -8 km/h reverse, so make sure to plan your route to cover; the overall mobility is also good so make sure to utilize it for getting into shooting position before enemy does.

HJ-9 ATGM
Two-plane stabilizer
Reduces the swing of the gun in two planes while moving
Autoloader
Automatically feeds projectiles into the breech. The speed does not depend on the skills of the loader
Ammunition12 rounds
Belt capacity4 rounds
Reload15.0 s
Fire rate60 shots/min
Vertical guidance-10° / 10°
Fire on the moveup to 6 km/h
Main article: HJ-9

The main and the only armament on AFT09 is the HJ-9 ATGMs onboard, these 12 rounds of missiles are the 2nd generation ATGM of PLAGF from late 1990s; players might found this missile looks like a longer BGM-71 TOW with an anti-ERA detonation rod, but do not underestimate the missile itself- at a top speed of 500 m/s and having an unrivaled tandem warhead with 1,200 mm penetration at its tier that is more than enough to even send the infamous T-80BVM at top-tier to their kingdom come, it can be ensured that any vehicles it hit will either be destroyed instantly or severe damage from the missile itself; which is also true for light vehicles that would be overpressurized by the missile itself.

Note: the final 4 missiles at the internal rack clears out only when all missiles has been fired.

Players of VAB MEPHISTO will soon find themselves home as AFT09 shared a very similar config of missile launcher and chassis; both vehicles are 4×4 and have a retractable launcher with 4 missiles. AFT09 shares the same chassis with the PTL02, but thanks to its relatively lighter weight, it has a higher top speed than the latter and a slightly faster reverse speed; although this might not sound like much for such a lightly-protected vehicle, the mobility itself can ensure AFT09 be fast enough to take advantage positions before enemies do, be ready to counter enemies assault or retreat as soon as the tides have turned. Do remember that the overall protection of it is only rated for rifle-caliber bullets, anything larger is like a hot knife through butter, therefore covers are the most essential element to ensure the overall survival of the vehicle. The number of smoke grenades on the vehicle might be low, but it is still enough for a quick retreat.

AFT09 has a triumph card in hand- its HJ-9 missiles. At its current tier, there is practically no vehicle that can stop its 1,200 mm penetration missile that flies at 500 m/s, this also ensures its capability even at the top tier as HJ-9 can even penetrate some of the most infamous MBTs in-game with ease. Fitted with ±10° vertical limits and a 1st generation TVD, this also ensures players can find targets at a faster rate and deliver the fatal blow to enemies; alternatively, its 5.5 km range is also threatening to hovering helicopters since most missiles at this tier can barely fly 4 km, a precise hit on them will very likely knock them out right away if they are unaware of such a huge missile.

As the development of the previous generation ATGM has settled (HJ-73) and earlier HJ-8 were proved ineffective against the latest MBTs from both USSR and NATO, PLAGF was in dire for a new heavy ATGM with new guidance system as well as sporting their latest FCS. The new missile started its pre-development theorization in early 1980s and officially started its development in 1988, the result was the HJ-9 that has been finalized in 1995; the new missile was first shown in the 50th and 60th National Day Parade as the vehicles G phalanx and 14th phalanx respectively on a WZ550 chassis with different camouflage designs. In NORINCO catalogues, they also displayed a tripod variant as a standalone weapon system or onboard a open-top Iveco truck as its main weapon; the only export customer, Rwanda opted for an APC with a HJ-9A launcher on top instead.

Being based on a shortened version of the Chinese ZSL92 APC, the HJ-9 features excellent mobility, typical for most wheeled vehicles regardless of rank. Specifically, the HJ-9 can reach an excellent top speed of 95 km/h on paved roads thanks to its 290 horsepower diesel engine. On the other hand, the vehicle’s comparably low combat weight and the resulting high power-to-weight ratio enable it to cross even rougher terrain with relative ease - just be wary of boggy areas and deep snow as these considerably hamper the mobility of wheeled vehicles in general.

In most cases, wheeled vehicles don’t feature heavy duty protection so as to not hamper their mobility. This principle also applies to the HJ-9. Engineers only equipped the HJ-9 with steel armor up to 12 mm in thickness as well as bulletproof glass for the windows. Needless to say, this makes the HJ-9 highly susceptible to everything but small arms fire and shrapnel. Aircraft in particular may prioritize the HJ-9 over other targets due to its poor protection and lack of a defensive roof-mounted machine gun. As a result, commanders are best advised to make the most use out of the HJ-9’s excellent mobility and constantly change position after each engagement to ensure they remain an elusive target on the battlefield.