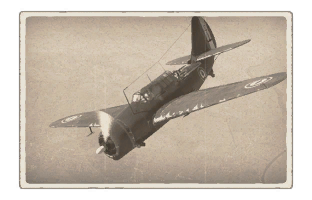 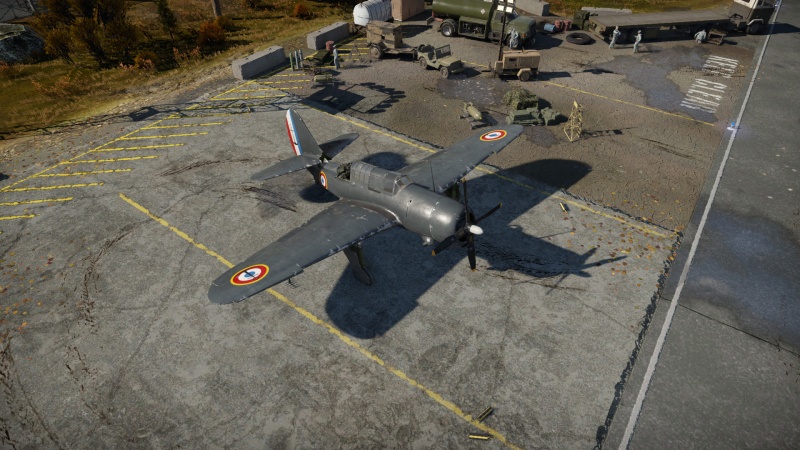 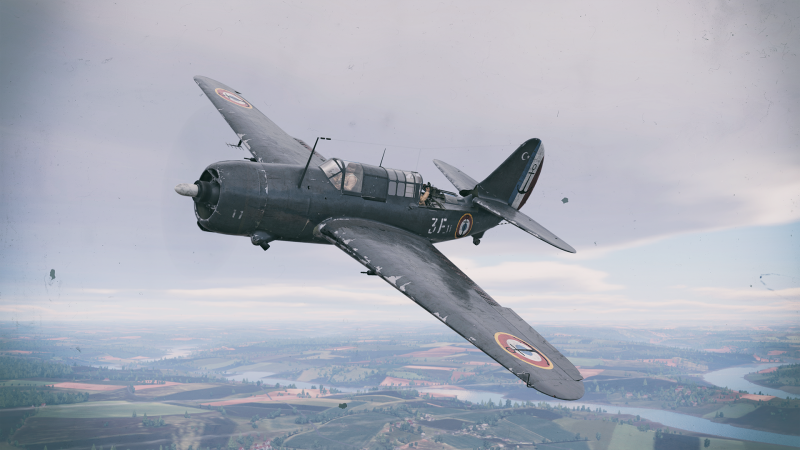 The SB2C-5 Helldiver dive-bomber was designed as a replacement for the SBD Dauntless in US Navy service. US pilots may be familiar with the SB2C-1c and SB2C-4 and this plane is virtually identical besides its inability to carry the 1,000 lb Type A magnetic mine. While the Helldiver works well as a dive-bomber or attacker, its good armament and bomber spawn also allow it to hunt other aircraft. The good turning ability can be a lethal surprise during dogfights.

The SB2C-5 is large and bulky, as with many other US Navy aircraft. Its speed, climb, and acceleration are poor by fighter standards, not exceptional by attacker standards, and acceptable by bomber standards. Roll rate and general energy retention are substandard as well. But like the Soviet IL-2, it has a good turn rate in the horizontal, which can turn the tables on enemies who underestimate the SB2C. The rudder tends to lose effectiveness at higher speeds, so take advantage of the airbrakes during extended dives to maintain control.

The SB2C-5 is a fairly rugged plane. In head-ons, the pilot is protected from instant knockouts by the bulletproof glass and the radial engine can soak up some incoming fire. The firewall behind the pilot also helps to avoid pilot knockouts from the rear, though the gunner has very limited protection and the fuselage fuel tank might be ignited by cannons or heavy machine guns. It also presents a very large target, so don't allow enemies to sit on your tail.

The AN/M2 cannons are very powerful. They have a decent rate of fire and good muzzle velocity along with strong kinetic effects for the AP-T rounds and good explosive filler for the HEF-I rounds. Use either Default, Air Targets, or Universal: Default consists of 2/3rds HEF-I and 1/3rd AP-T, which works just fine, and Air Targets consists of 3/4ths HEF-I and 1/4th AP-I for those who want maximum explosive damage. For ground attack, the Universal belt has 50/50 AP-T and HEF-I content and is the best option. Ground Targets and Stealth have practice rounds that deal little damage, so these should be avoided. Note that the HEF-I rounds don't have tracers, so those who are not accustomed to leading the cannons should consider Universal.

Gun convergence should be considered since the cannons are mounted far apart on the wings. 400-500 m should work well.

The SB2C-5 has a good array of ordnance. It can carry up to 2,000 lb of bombs, which is not exceptional for its rank but not bad either. The HVAR rockets are somewhat underwhelming in terms of explosive power and ballistics and typically need direct hits to destroy ground targets. They also cannot be taken in conjunction with other ordnance, so it is best to avoid them. The twin M2 Browning gun pods are a significant boost the SB2C-5's firepower and are a good choice for bomber hunting or head-on engagements at the cost of dogfight performance and bomb carrying capacity. The torpedoes should be disregarded. They are useful against ships and only ships, but there are currently no French naval units to pair the Helldiver with.

The twin 7.62 mm machine guns are not very effectively at warding off enemies at the Helldiver's rank. They can only pilot-snipe aircraft with no bulletproof glass and are not very effective at setting fires or damaging modules. Causing an oil or fuel leak is a lucky occurrence and the defensive gun should not be relied upon to protect the plane.

The SB2C-5 enjoys a bomber spawn in RB, but using it as a pure bomber is not very productive since its bombload isn't very impressive; 2,000 lbs maximum is not enough to take out a base at its battle rating. As such, the bombs are best used against ground targets and pillboxes. The cannon armament, decent durability, and bomber spawn also make it good at hunting other bombers, who may not expect to be intercepted by another aircraft so quickly.

One method of using the SB2C is to use it initially as a high-altitude bomber hunter and later as a dive bomber and attacker. There is a window of time at the start of the match where enemy fighters will generally not have climbed up to bomber altitudes, and during this time any bombers encountered are typically not escorted. The powerful AN/M2 cannons can destroy enemies from a safe distance and the SB2C can afford to take a hit or two from defensive gunners. When enemies and/or teammates have reached your altitude, start thinking about when to dive down. If you are carrying bombs, they can be used to destroy quickly pillboxes and tanks. The cannon and gun pods can be used against lightly armoured targets, and if there is a surplus of ammo, against light pillboxes as well. The SB2C can use its manoeuvrability and guns to dive down and engage enemies below it, but keep in mind that the energy retention and climb rate prevent it from regaining that altitude easily once expended. Try to stay close to teammates as a knowledgeable enemy fighter will know to exploit the SB2C's poor speed and vertical performance to take it out safely. If any enemy attackers have survived up to this point, the SB2C stands a better chance of cleaning them up. But be wary of head-ons; some attackers like the SM.91 have ludicrous forward armament that exceed the SB2C handidly, and others like the IL-2 have both lethal guns and heavy armour.

The SB2C-5 can be used to good effect in Ground RB, though it does not have an accompanying tank lineup at the battle rating of 4.0. The best loadout for tank busting is the 1 x 1,000 lb + 2 x 500 lb bomb setup, which should be sufficient for a few sizeable bomb drops. This SB2C lacks the ability to carry the extremely powerful magnetic mine available to its US cousins, which makes it somewhat less entertaining, but the traditional bombload is often more practical. Bomb delivery is easy due to the SB2C's slow speed and easy handling. The airbrakes are helpful for deep dives. Once the bombs are expended, keep an eye out for enemy fighters and attackers. The SB2C can fare surprisingly well in the low-altitude turnfights common in Ground RB, so make good use of the cannons. The cannon's AP-T rounds also do good work against lightly armoured vehicles like light tanks and SPAA, and even some medium tanks like the Panzer IV. Note that SPAA is a major threat to the SB2C since it is slow, big, and not heavily armoured, so keep an eye on the ground and try not to stall out in full view of a Wirbelwind.

The Curtiss SB2C Helldiver was a dive-bomber that entered service with the US Navy in 1942, replacing the earlier SBD Dauntless. A much larger aircraft than the Dauntless, it was powered by the R-2600 Twin Cyclone engine and featured an internal bomb bay. The Helldiver experienced difficulties during development and was initially unpopular with its crews. It had a shorter range than the Dauntless, was difficult to maintain, and had worse handling characteristics, earning it some colorful nicknames like "Big-tailed Beast" or "Son of a ***** 2nd Class". The design was progressively improved and the SB2C served extensively in the Pacific, participating in the sinking of the Japanese battleship Yamato and other storied campaigns. The US Navy continued to use the SB2C after the end of World War II for a few years, but the concept of the dive bomber had become outdated due to the advent of powerful air-to-ground rockets, guided weapons, and other technological advances. Even during the war, the Helldiver's role was often taken over by fighter-bombers like the F6F Hellcat. The Helldiver was retired in 1947 and a number were sold to other countries.

France purchased 110 SB2C-5 Helldivers beginning in 1949 as a replacement for their own SBD Dauntlesses and used them until 1958. The SB2C-5 model was a minor improvement over the SB2C-4 featuring slightly more fuel and a modified canopy that did not enter service with the US Navy until after the end of World War 2. The Helldivers were based on three French aircraft carriers and saw use in the First Indochina War.