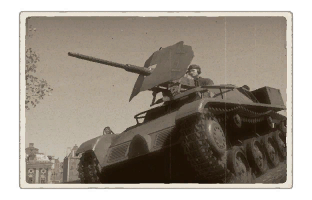 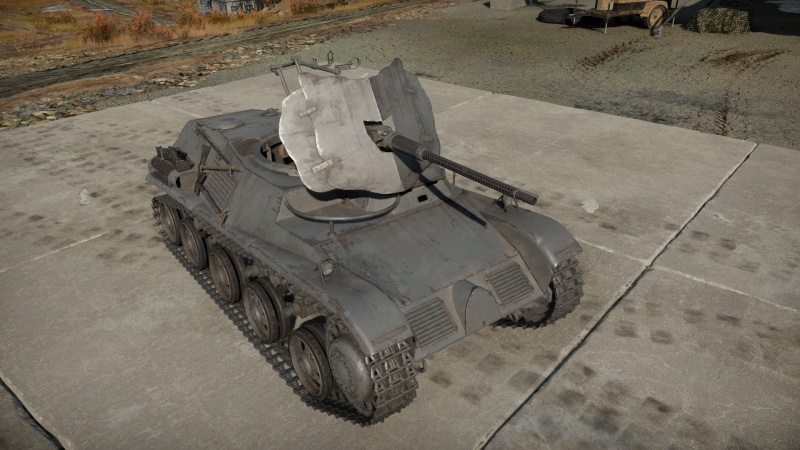 The Pansarvärnslavettvagn fm/42 is a rank I Swedish SPAA with a battle rating of 1.3 (AB/RB/SB). It was introduced in Update 1.97 "Viking Fury" as the Swedish rank I self-propelled anti-air vehicle.

Historically the Pansarvärnslavettvagn fm/42 was a Swedish attempt at creating a self propelled platform for the Bofors 20 mm anti tank/anti air autocannon L/70 (Swedish designation 20 mm automatkanon (akan) m/40). The idea was to reuse the chassis of the failed Landsverk L-120 prototype tankette and fitting it with the aforementioned weapon to trial the concept. The trials were somewhat successful and would lead to the development of the Swedish SPAA Lvkv fm/43.

The Pvlvv fm/42 is a fairly weak vehicle in terms of survivability, at least in Realistic and Simulator mode where it will be knocked out after losing one crew member. It features no meaningful protection from any angle, with only 10 mm of armour protecting the front of the hull and 16 mm of effective armour protecting the gunner. This armour is superficial really, as even heavy machine guns will have no trouble getting through the armour of the vehicle, and seeing as it's only manned by two crew, a shot through the flat armour of the drivers port will easily knock the vehicle out of action. Additionally as it's open-topped, it's very vulnerable from the air, and the gun can't angle directly upwards, meaning the gun shield can't be used to protect against enemy aircraft. This vehicle may survive a poorly placed shot, but most of the time the armour is not in any way reliable. 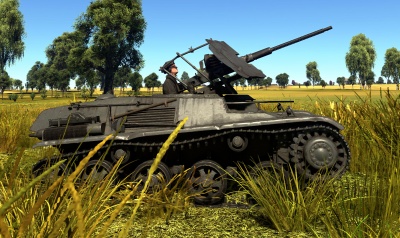 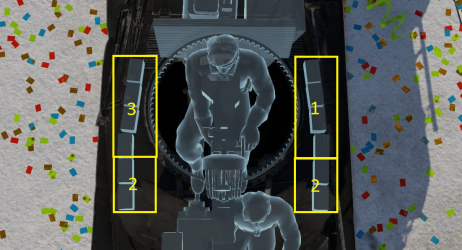 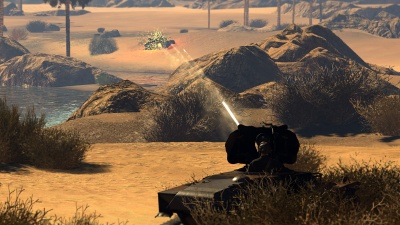 The lack of elevation for the cannon makes engaging aircraft tricky and sometimes impossible if the map is quite flat, as to engage aircraft this vehicle needs to be positioned on high ground or at an angle on the terrain. In general, it's not recommended to attempt to engage aircraft unless the player is confident that the plane can be taken out in one burst, as if an enemy aircraft notices the Pvlvv fm/42, they'll also likely know the Pvlvv fm/42's flaw of being unable to elevate the gun very high, so they will simply dive right down on top of the vehicle to strafe out the crew, which is a fairly easy task as from the top the crew have no protection. Therefore, the player needs to pay constant attention to the locations and distances of enemy aircraft, and always face th gun shield to them to avoid having the gunner exposed and strafed.

Due to the extremely limited ammo capacity, this SPAA cannot enjoy the luxury of spraying shells at low-flying planes. The most potent way of downing planes is to do head-on with them as this method uses little ammo. First, locate an enemy plane and fire single shots towards their flight path. These shots would certainly miss but will hopefully get the plane's attention. Most planes might choose to strafe an SPAA for an easy kill. If they do start flying towards you, immediately enter gunner view and zoom in. This SPAA has a very good gunsight, allowing the player to clearly view a target precisely track it. As the plane dive at you, aim slightly upwards at it (at the tip of its vertical stabiliser) to compensate for shell drop. The more vertical the dive is, the closer you should aim for the very centre of the fuselage. Then give a 1-second burst while very slightly moving the mouse up and down to enlarge your shell spread, increasing the chance of scoring hits. Of course do not spread too much, the shells should be concentrated at and around the fuselage. Usually 2-4 hits will guarantee a critical hit if not a kill.

Note that even if the player has the 'camera from tank gunner view' ticked off (gun camera will be within gun barrel), the gun camera's location of this SPAA will still be below the barrel. Therefore if the target is close, aim down a bit to compensate for such layout.

Despite being classed as an SPAA vehicle, it truly excels at fighting ground vehicles. As this vehicle has very little ammunition, engaging ground vehicles allows the Pvlvv fm/42 to potentially maximise its shots on target. Engaging aircraft usually results in lots of missed shots, which largely isn't too much of a problem generally for SPAA as they're usually equipped with lots of ammunition, but as this vehicle isn't, all shots need to count, and as such leading shots on ground targets is much more consistent that it is the recommended way to play. 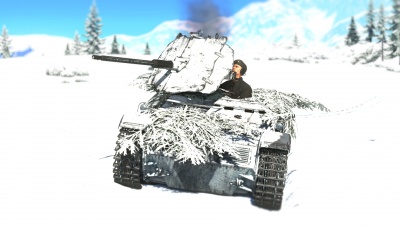 Not much is known about this tank since only one was ever built and was never put into active service. It was designed in 1939 off of the Landsverk L-120 tankette.