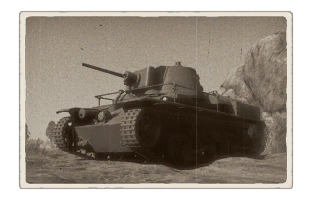 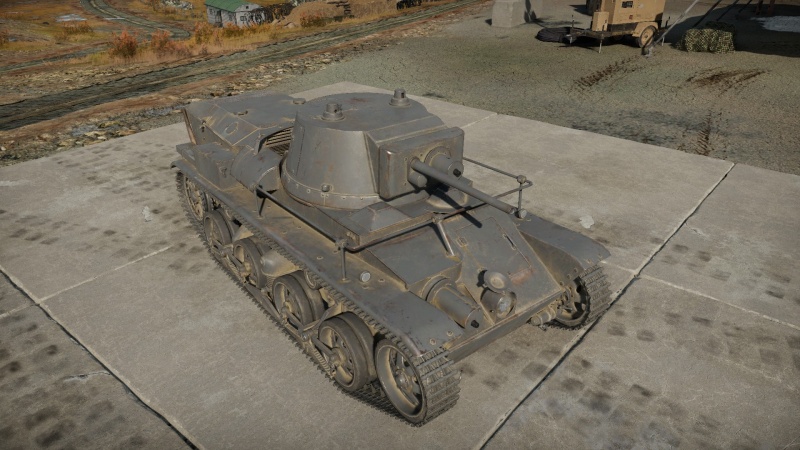 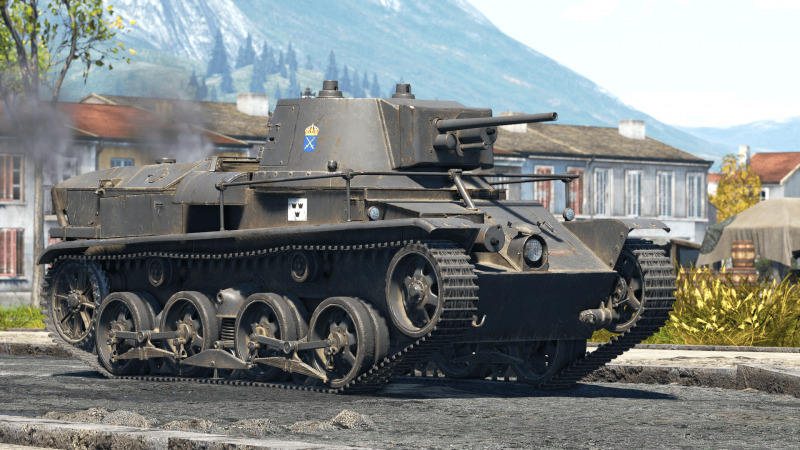 The armour of the Strv m/31 is thin and should not be relied on. The frontal hull armour tops at 24 mm and is poorly angled, meaning that almost any tank can penetrate it (e.g. BT-5, M2, Pz.II), even the .50 cal! The hull side is 24 mm thick which can also be penetrated with ease, but sometimes if the enemy messes up their aim, an angled 24 mm side may bounce one or two shots.

The turret front is weak against high-penetrating tanks like M3 GMC and Panzerjager I, as it is still 24 mm thick and not angled. Against weaker small-calibre rounds it may be effective to some extent. The gun mantlet is full of 'obstacles' like the armoured housings for the coaxial MG, the cannon barrels and its hydraulic recoil cylinders which, with the implementation of volumetric shells, became fairly good at catching shells and making them lose penetration. Thus the parts where shells can actually go through without being interfered are very small and hard to target. Other than the gun mantlet, the rest of the turret, when viewed from the front, is composed of extreme angles, which will certainly ricochet any shells. When shot from other directions than the front, the turret is still poorly armoured and is not very likely to stop any shells.

The post-penetration survivability is very low since the 3 crew members are seated closely to each other. An explosive-packed shot would usually knock all of them out. Even a solid shot/autocannon shells might easily knock out 2 crew members, destroying the tank.

The one positive side is, perhaps, that the transmission is not located near the front, so the Strv m/31 will not be immobilized if it gets frontally penetrated.

The mobility of the Strv m/31 is in the top range. Though not as fast as tanks like BT-5, this tank is still able to lead the charge with its great speed (both on and off road). On average the Strv m/31 can cruise at around 42 km/h, allowing it to get to any location on time. The reverse speed is also great, topping at 19 km/h meaning the player can usually retreat from danger without turning around, increasing survivability. The tank's mobility gives it more agility to conduct short range tactical manoeuvres. The hull traverse is slightly worse, often needing a forward/backward acceleration before turning. Overall, the Strv m/31 is fast and agile.

The Strv m/31 is equipped with a 37 mm kan m/38 cannon, a good gun for a tank its rank. The cannon has adequate accuracy, which allows for the engagement of distant targets to some extent. It also has a short reload time of ~3.5 seconds ensuring quick follow-up shots, if the first shell failed to knock out the enemy target. An impressive -10° gun depression means the tank can comfortably fight among hills.

The default slpprj m/38 round is very average, with around 50 mm of penetration which is usually enough to penetrate most tanks, such as T-26, M3A1, Chi-Ha, etc. The post-penetration effect is quite poor, but this is to be expected for a solid APBC shell. The good news is the fast reload, which allows you to quickly pinpoint crew members untouched by earlier shots.

The unlockable slpgr m/39 shell comes with a 15g explosive filler which can be very helpful given that most early-war tanks are crammed with a small number of crew members. This will result in the Strv m/31 easily knocking out tanks like BT-5/7, Pz.II, Ke-Ni in one shot. One thing to note, is that the slpgr m/39 has slightly worse penetration than the default APBC, so it will struggle against better armoured tanks such as an angling M13/40.

The slpprj m/49 APDS will be a nasty surprise should the m/31 fight in an uptier. This shell has formidable penetration of 105 mm, allowing the m/31 to penetrate tough tanks such as B1 bis/ter, Matilda, or Valentine. Its velocity of more than 1,000 m/s is very fast, meaning sniping moving targets is easier. Such velocity leads to a noticeably flattened trajectory, further easing the task of sniping. Just like the default APBC, this shell has poor post-penetration damage, so be sure to aim for critical spots and use your fast reload well. 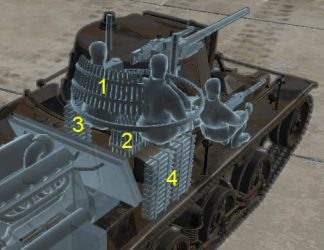 Ammo racks of the Strv m/31

The Strv m/31 is equipped with a 6.5 mm machine gun, nothing out of the ordinary. It is useful for attacking AA vehicles or more lightly armoured foes.

The Strv m/31 is a light tank with poor armour. It shouldn't be used to rush into the heat of the battle or you will get knocked out very quickly. Its armour is inadequate, it can't even stop 12.7 mm HMG fire. Instead, it should be used to flank other enemy tanks, using your excellent speed to your advantage. The Strv m/31 has an unconventional armour layout. Its frontal area (e.g. upper hull, glacis area) armour is very weak while the rear is really strong. This tank also has pretty good speed in reverse, so you can drive into battle facing backwards using your rear armour and engine to soak up damage.

The Strv m/31 was designed during the 1930s as a continuation development of tanks German designer Joseph Vollmer had designed. When the Germans took over AB Landsverk in 1920 they had the idea of a tracked and wheeled armoured vehicle, which during that time was not allowed to be developed under the Treaty of Versailles. From the design and idea Joseph Vollmer had in Berlin, this idea would continue to be developed in Sweden using AB Landsverk. The tank would be designated L-30 by Landsverk and, along with the development of the L-30 which had both wheels and tracks, there was a purely tracked model of the tank which would be designated L-10.

AB Landsverk got an order from KAF in Autumn 1931 to build one L-30 and three L-10 for trials after an in-depth analysis of the vehicles where the L-30 and L-10 would get extensive trials. L-10 would be designated Strv m/31 while L-30, which shared the same construction, would be designated Strv fm/31. After many delays, the L-30 was finally ready from the AB Landsverk, but was deemed to be too outdated and all the advanced technology that had been put into it would make it too vulnerable, as in the meantime tracks had become stronger and suspension systems a lot more comfortable in tanks, favouring the L-10 instead.

When the L-10 was delivered from the factory, it could showcase the construction with new modern ideas being presented. Instead of the usually riveted armour, the tanks were welded, which improved the survivability since riveted tanks could eject rivets from enemy shell hits and become projectiles in the crew compartment. Along with the new armour, it also used a prism periscope in glass which would improve the view for the driver and not use the slits tanks used which, though they could be closed to protect from enemy fire, in doing so would turn the driver blind which would be inefficient to have.

L-10, designated Strv m/31 by the army, had adequate armour for the time with a total of 24 mm at the front. Also like the other tanks during this period, they were equipped with a 37 mm Bofors gun and two machine guns, one in the turret and one in the hull. They were also equipped with radio equipment and a strong 150 hp Maybach engine. However, Strv m/31 would come with a lot of problems, it was considered a good vehicle on terrain but the tracks would break a lot and would have a lot of problems with the transmission.

Strv m/31 saw very little use in service and was proposed to be dug down on Gotland as a static defence. They were also proposed as command tanks. The tank will always be an important part of tank history, leading the way for how the tanks would be constructed being the most advanced tank of the time during its early days.

Swedish tanks aren't very well known even by many enthusiastic historians or fans of military vehicles. However, many of the design and technological solutions conceived by Swedish tank designers were unique and rather practical. Sweden's armoured vehicles are truly fascinating, and the Swedish ground vehicle line in War Thunder will present to you some highly original tanks with one-of-a-kind features and gameplay finer points. We'll start our overview of the Swedish tech tree by looking at the first tank starting the progress of all the Swedish ground vehicles. Meet the reserve Strv m/31 (from "Stridsvagn", Swedish for "tank"), a 1935 light tank. According to some experts, this little tank came close to being the most high-tech tank of its time!

In 1930, the Swedish firm Landsverk developed two tank designs – one fully tracked and the other with a wheel/track arrangement – differing in their chassis construction and armour. In the autumn of 1931, the Swedish government ordered four experimental prototypes – one wheel-and-track and the other three fully tracked. The versatile tank could switch from tracks to wheels in an incredible 30 seconds flat and reach speeds of up to 80 km/h in such a configuration! However, the wheels were unable to bear the weight of substantial armour, so it was limited to 14 mm for this modification. The fully tracked version could cope with armour up to 24mm thick, which is pretty respectable for a pre-war vehicle. Moreover, the designers took a risk by choosing welded armour plating over the more common riveted design, this also had its advantages. Even more interesting is that they set the angle of the frontal armour plate in order to increase the chance of enemy shells ricocheting. Put into service under the designation Strv m/31, the new tank was given the Maybach petrol engine, which was able to provide a power-to-weight ratio of approximately 17-18 horsepower per ton. The tank's armament comprised a 37 mm cannon with 122 rounds. All of the prototypes were put into service, though they required certain improvements. The vehicles' weak point was their unreliable and difficult-to-maintain suspension, as well as the tanks' overreliance on foreign-made components. The tanks were used as training vehicles.