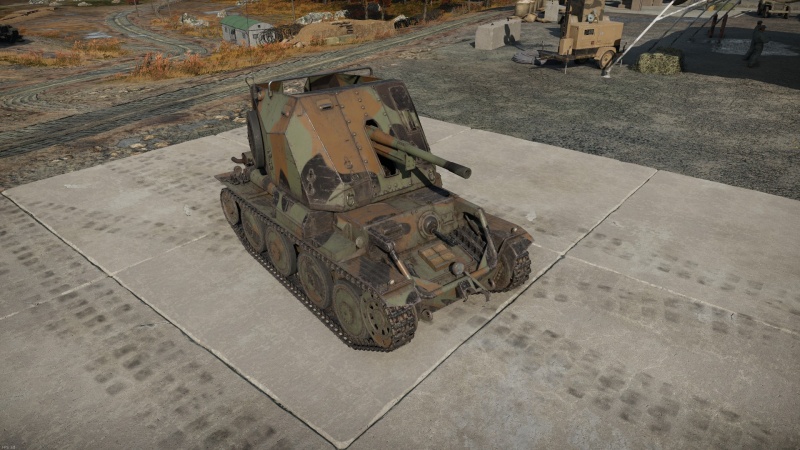 The Pansarvärnskanonvagn III is a rank II Swedish tank destroyer with a battle rating of 3.3 (AB/RB/SB). It was introduced in Update "Danger Zone".

Like the Pvkv II, the Pvkv III shares its hull with the Strv m/41, and as such has acceptable hull armour for its BR. However, due to the incredibly thin turret armour which is unlikely to resist the .50 cals found on many vehicles it will face, it is not recommended to fight head-on.

The floor armour in the turret combined with the gun placement makes anything but the largest HE, APHE, and HEAT unlikely to incapacitate the turret and hull crew in one shot, allowing the machine gunner and driver to retreat and repair. Due to this, a hull-down position is recommended.

The Pvkv III is very fast for a tank destroyer with a top speed at 43 km/h. With the same engine as on the Strv m/41 S-II, it can climb the steepest of hills and works great on soft terrain. It shines on maps with hills, forests or snow where this tank destroyer maintains its mobility.

The Pvkv III is a tank destroyer with a fully rotatable turret and great gun depression, an unusual sight at its BR. It is only matched by the Cromwell V and Sherman II.

With the 57 mm Pvkan m/43, the Pvkv III is a high threat to the enemy with the following shells. 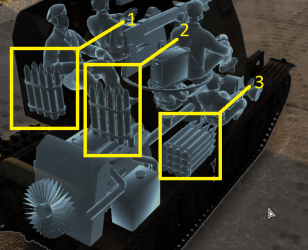 Ammo racks of the Pvkv III

The suggested playstyle of the Pvkv III is flanking or sniping. It is effective at defence thanks to its quick reload and great gun depression and with its speed, it Can be a great flanker.

At the beginning of the Cold War, the Swedish military was looking to equip its armed forces with new armoured units. However, as the state budget didn't allow for the procurement of completely new units, the military resorted to converting existing chassis into new vehicles. As a result, a range of experimental vehicles were hastily designed and tested to act as a stopgap measure until more modern equipment could be acquired.

Among these vehicles was the Pvkv III - a Strv m/41 converted into a tank destroyer by having its old turret replaced with a new one, housing a dedicated 57 mm anti-tank cannon. Differing only from the Pvkv II - a vehicle we already covered in one of our previous articles - by the weapon choice and by the intention to act as a stopgap itself for the Pvkv II until its production could be ramped up, all vehicles underwent testing in the early 1950s. Despite proving itself as a capable vehicle during these tests, the Swedish military soon adopted the Strv 81 into service, making further work on the project redundant and thus leading to the project's cancellation soon thereafter.