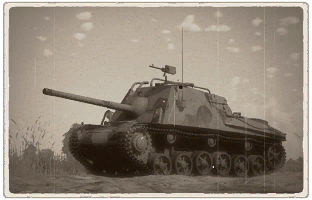 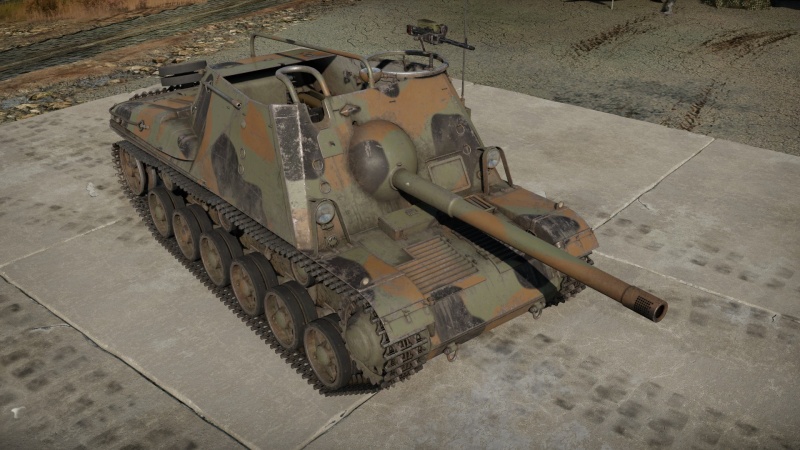 Survivability of this tank is bad for multiple reasons.

It's most likely that the Pvkv won't survive even one direct hit due to how the crew is allocated. Additionally, if the driver gets taken out, or even worse, an engine or transmission is damaged, the Pvkv m/43 (1946) can only shoot in a small area in front of the tank due to the turretless design. 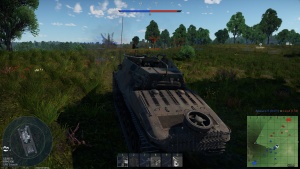 Stay away from enemies, occasionally check your front to avoid getting suddenly obliterated, keep sniping.

The frontal armour has a maximum effective thickness of around 80 mm of rolled homogeneous armour when fighting head-on, which won't save it from any shots at its BR. On the side, the SPG have 30 mm maximum protection, and on the rear 25 mm. Lower frontal plate armour is exactly the same as the Strv m/42 EH, since they both share the same hull. Because the vehicle is open topped, no matter what the user does it will always be very vulnerable to the aircraft and HE. Even 7 mm MGs can destroy it in one or two precise bursts.

To survive, the Pvkv m/43 (1946) must stay as far away from enemies as possible to reduce their shells' penetration power while also angling in both horizontal and vertical plane to increase its raw armour value. The easiest way to do that is to find a hill which still allows the gun to fire down, but angle the Pvkv as much as possible, then angle to the left as much as the gun allows the Pvkv to do so (since it can turn further to the right). At about 800 m range it becomes difficult for the light tanks to penetrate the frontal armour, at about 1,200 m range, when angled in both dimensions, armour will be able to sometimes deflect even German APHE (as long as it's not fired by a heavy SPG, which have incredibly high penetration).

In AB, an aggressive playstyle will put you at a disadvantage, it's a good idea to relocate between shots so that the enemy has problems aiming at the Pvkv. In RB, it's usually unnecessary as any enemy will have terrible zoom and will probably miss at least once before landing any kind of a hit.

The mobility of the Pvkv m/43 (1946) is nearly identical to the Strv m/42 EH. Driving forward, it can easily reach 40 km/h, even on rough terrain, so you will likely be one of the first vehicles at the cap. While shining when moving forward, the tank destroyer is slow in reverse, with a maximum speed of -5 km/h.

The main gun is the 75 mm pvkan m/43 cannon. While having excellent penetration and velocity, the reload is, considering the calibre and the open top, pretty long at 8.7 seconds with unskilled crew. In comparison, the German 75 mm guns only take about 6.5 seconds to reload.

The gun accuracy is pathetic until all accuracy modifications are researched, being reliable only up until ~600 m range until then.

The tank destroyer has no turret, it can only move the gun in about 33° arc in front of the tank, with 7 more degrees possible to the right. The gun depression of -15° is great, and the elevation of 20° is average.

The gunsight has an excellent magnification of 8x-16x, which is amazing. Most opponent will have around 1.5x-3x, making it well equipped for sniping.

The stock shell is the slpprj m/41 uncapped AP shot with decent penetration, but poor post-penetration values. Also, it tends to ricochet.

Once you unlock the slpgr m/43 APCBC shell, which is unfortunately a Tier IV modification, you have almost the best regular ammunition at the battle rating. The shell is similar to the one used by the Pvkv II, though it has slightly less penetration because of the lower muzzle velocity. Though its a bit slower, it still can penetrate any heavy tank within BR range on direct hit, and at point blank range it usually can penetrate tanks relying on angled armour (but not always). Also the shell does high post-penetration damage, because of the 110 g TNT filler.

The HE sgr m/38 is useful when dealing with open topped SPG at the rank, as they tend to sustain or bounce kinetic shots. Avoid using it on Sturer Emil or the likes of it without the element of surprise, as it has superior gun depression and will annihilate the Pvkv m/43 (1946) before it can even fire. 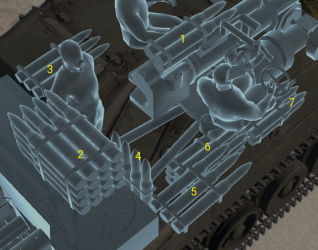 The Pvkv m/43 (1946) is an excellent sniper due to its amazing gunsight zoom, great gun depression and deadly cannon. This tank destroyer unfortunately cannot perform as well when played as a regular tank, as it lacks the agility, gun traverse, and armour to flank or confidently take hits. Thus, to best utilise its sniper potential, the player must memorise various spots for sniping on different maps.

Good spots particularly for the Pvkv m/43 (1946) often have the following characteristics:

There will often be situations where the player needs to either push forward with the team or to retreat under attack. This is when good map-reading skills come into play: the great spots you fought at earlier might become dangerous when the tide changes. For example, a corner at the friendly side can become quite menacing as a few enemy pushes to there. Therefore you must practice how to quickly find new spots at anywhere on the map, as well as to correctly identify which new area/passageway to ambush. The Pvkv m/43 (1946)'s mobility allows you to change position in time. Custom battles provide a great place to practice such skills.

As the match progresses, you might lose the opportunity to pick on targets far away and instead have to enter close quarter combat. Although the Pvkv m/43 (1946) is now more vulnerable, with the right ambush position you will still be able to fight. However, one aspect to note is that the high gunsight zoom can become a problem in a face-to-face standoff. Most players are likely to subconsciously enlarge the zoom after entering sniper mode, and due to the high zoom, you will only be able to see an extremely limited part of the target. It will be more awkward if the target is moving. Therefore you need to not always use 16x zoom to adapt CQC.

The Pvkv m/43 used the chassis of the Strv m/42, but with a casemate superstructure replacing the turret. The superstructure was located at the front of the vehicle, and the glacis was sloped. It had an open tarp to keep the weight down, and used a tarp to protect the crew from the elements. The Pvkv m/43 had a crew of 4, and was initially armed with a 75 mm luftvärnskanonen m/36 antiaircraft gun, modified with a longer barrel for increased armour penetration. The gun could traverse 15 degrees to the left and right. It had a Ksp m/39 machine gun as the secondary armament. It was powered by a Volvo A8B engine producing 360 hp. The gearbox was different than the gearbox of the Strv m/42, and the drive wheels had to be reinforced to handle the increased weight of the vehicle. The Swedish military ordered 87 Pvkv m/43 in 1942, but deliveries were delayed and the last vehicle was delivered in 1948.

In 1954, the vehicle was given an armoured roof to better protect the crew. Other improvements included a muzzle brake, a gun rest, and a gas ejector. The Strv m/41 was retired from service in 1957, which allowed the two Scania-Vabis L603 engines per vehicle to be used in the Pvkv m/43. The two L603 engines produced less horsepower (320 hp) than the Volvo A8B, but were much more reliable. In 1970, the Pvkv m/43 was retired from service, and the guns were used in static fortifications until 1995.