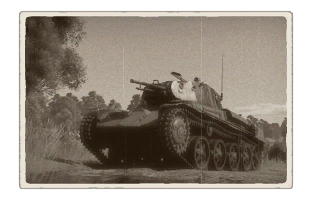 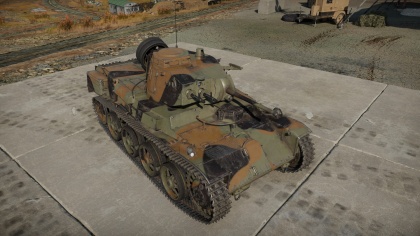 The Strv m/40L is essentially the Strv m/38 with increased frontal armour. The frontal hull armour is increased to a maximum of 43 mm, while the turret is uparmoured to 50 mm. This provides a decent degree of protection against autocannons and heavy machine guns as well as low calibre anti-tank guns. However, the rest of the tank's armour profile remains identical (13 mm), and it is thus still very vulnerable from directions other than the front.

The engine of the Strv m/40L is identical to that on the Strv m/38. However, the tank is considerably heavier due to the increased armour, thus somewhat worsening its acceleration. Mobility characteristics are otherwise almost identical to its predecessor.

The Strv m/40L uses the same 3,7 cm kan m/38 gun as the Strv m/38. The turret mounting has been modified, however, to provide an even greater amount of gun depression (15°). The ammunition choice is identical: it starts with the unremarkable slpprj m/38 APBC shot. At tier IV, the slpgr m/39 APBC and slpprj m/49 APDS rounds can be unlocked. The former round has a small explosive filler while having only slightly less penetration than the stock APBC shot. The APDS round has over 100 mm of penetration at close range and a muzzle velocity of 1,150 m/s and is capable of penetrating anything the Strv m/40L is likely to face. The high velocity makes it good for sniping, but the APDS round tends to be less accurate than the APBC rounds.

The Strv m/40L excels in hull-down combat where it can exploit its outstanding gun depression and relatively good turret armour. The powerful APDS round allows it to easily penetrate and disable even the heaviest of tanks it can normally encounter, such as the B1 bis and Valentine. However, it has relatively low post-penetration effects, and will often require multiple shots to kill larger tanks. The tank's mobility is quite respectable and allows it to keep up with other medium tanks. The frontal armour is quite good, but quite thin elsewhere.

In 1934, a new light tank was designed for Sweden by Landsverk, the L-60. It was based on the Landsverk L-10/Strv m/31, but with a new torsion bar suspension system. The torsion bar suspension system was a large improvement over the Christie suspension system. The L-60 S/1 entered service with the Swedish military in 1938 as the Strv m/38. The L-60 S/1 Strv m/38 was armed with a Bofors 37 mm gun. In 1939, Sweden ordered an improved version of the Strv m/38. It was designated as the L-60 S/II Strv m/39. The Strv m/39 was armed with an improved Bofors 37 mm gun and had a new engine. During World War 2, the Strv m/39 was upgraded with additional armor welded onto the glacis and mantlet.

At the same time, there was a need for another upgrade of the Strv m/39. The turret mantlet was modified and a commander's cupola was added along with side hatches. These also received the upgraded armor of the Strv m/39, and were designated as L-60 S/III Strv m/40L. The L-60 served with the Swedish military throughout World War 2, and also became the basis of the L-62 Anti II SPAAG designed for Finland, which also saw service with Hungary as the 40M Nimrod. In 1960, 20 L-60 tanks were sold to the Dominican Republic by Sweden. Rebels, backed by the US Marine Corps, fought against the L-60 during the Dominican Civil War. 3 were destroyed by M48 Patton III's, M50 Ontos, and anti-tank fire. 12 were upgraded and saw service until 2002.